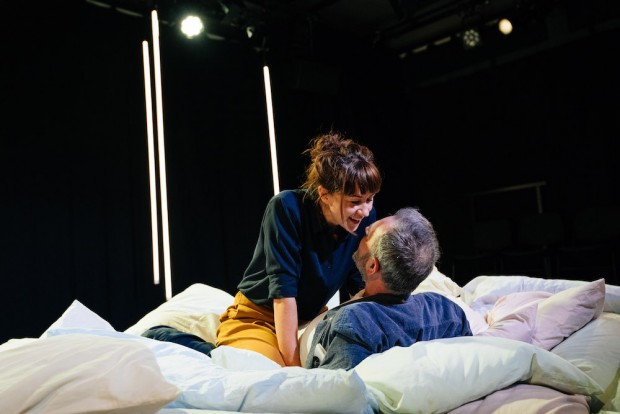 The best kind of two-hander is the play about couples. And the most dramatic way of saying something about relationships is to show a couple who are in trouble, bad trouble. Crisis. Especially if they start off well together. Kenny Emson’s smart, sharply written new play, which arrives at the Bush on its way to the Hightide and Edinburgh fesrtivals, does just that. Its main theme is honesty in personal relationships and if you think that its title, Rust, suggests a corrosive decay of hope you wouldn’t be far wrong.

The couple are Nadia and Daniel. Both in their late-30s, she is a middle-class businesswoman and he is a craftsman who repairs clocks; they are both married and have children. They meet, are attracted to one another and decide to have an affair. But it’s an affair with a difference. Instead of the usual messy situation, with snatched phone conversations and hasty meetings, they set up a system. They rent a flat and meet every Monday. Nadia even draws up a set of 10 rules: they agree never to mention anything about their marriages, about their families, about their children. Easy. If only. With its sparse furniture, their fuck pad is their fantasy island. (But don’t mention love.)

Over the course of about 70 minutes Emson shows how their three-year affair plays out, from its initially playful encounters to the recriminations of disappointment. As the inevitable problems gradually gatecrash their little sanctuary of lust, their adulterous affair begins to reproduce all of the miseries of marriage. Although it is very short, this two-hander is written with great precision and full attention to this couple’s shifts of feeling. The play’s storytelling is gripping, its observations are emotionally true, and its ideas are lively and thought-provoking. The playwright’s sympathy for his characters is evident in every scene, none of which outstays its welcome.

There’s a neatness and brevity about the rapid scenes which makes you long for more. I like the way in which jealousy, always the worm in the bud of lust, is introduced, and likewise the fear and guilt of this arrangement also comes across well. I really like the scene in which they dance on a table to the music of the Eurythmics’ “Love Is a Stranger”: love, indeed, is a danger. Love is a drug, drug, drug. Obsession. The tension between wanting to live honestly and accepting the partial pleasures of deception also comes across strongly; both Nadia and Daniel can’t quite leave their families. But for all his skillful penmanship, Emson isn’t able to completely avoid the main problem with short two-handers: the more you like the characters the longer you want to stay with them.

So although Rust tells its story with flair and fullness, I was left feeling I wanted some more. For me, what is missing is more detail about their sex lives during this highly organised affair. What is it really like, emotionally and sexually, to meet regularly, once a week, just to fuck? What fantasies could they enjoy that they were unable to satisfy in their marriages? After all, Nadia is quite militant: in a couple of free-spirit speeches she articulates an ideology of freedom and mocks straight society. While most stories of liberated sexual adventure — such as Bernardo Bertolucci’s Last Tango in Paris, Harold Pinter’s The Lover or Betrayal — show inevitable failure, does this mean that Nadia and Daniel’s experiment is likewise doomed? Questions, questions.

Still, there is much to enjoy in Eleanor Rhode’s excellent production, with its set — designed by Max Johns — which features one enormous pillow-strewn bed, backed with hanging neon rods. Claire Lams (Nadia) and Jon Foster (Daniel) make a really good contrast; she is nimble, he more lumbering; she radiates youth; he seems more stuck in middle age. At their best, Foster exudes a boyish openness while Lams has a complementary thoughtful brightness. Their onstage rapport is great. And if I really want to know more about the bad stuff their characters discovered about each other during their affair, I can still appreciate this portrayal of trust and betrayal.