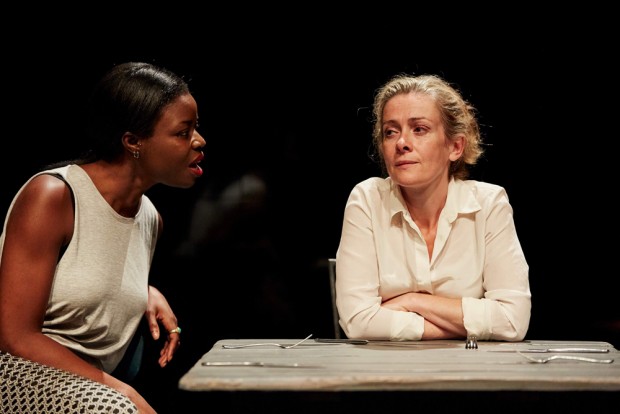 Alice Birch is one of the most exciting playwrights to have arrived in the past five years. This restaging of the brilliantly titled Revolt. She Said. Revolt Again. — which was first put on as part of the Royal Shakespeare Company’s Midsummer Mischief festival in June 2014 — demonstrates not only the power of her theatrical imagination, but also her enormous technical skill and sense of emotional truth. In the original playtext, she stresses that “this play should not be well behaved”, which sounds like an incitement to messiness. Luckily, Erica Whyman’s production is tight, taut and thrilling. But also messy where necessary, and in a good way.

Following in the footsteps of Caryl Churchill, Martin Crimp and Sarah Kane, Birch throws off the conventional constraints of setting, character and plot, and presents us with a 70-minute theatre piece which is organised in four short acts. The first is a series of hilarious playlets under the rubric of radical instructions, such as “Revolutionize the Language. (Invert It.)” and “Revolutionize the Work. (Engage with It)”. In one, a woman subverts what her lover thinks is his seductive language; in another, a romantic offer of marriage is refused because the woman doesn’t want “to become your possession”; in the next, a woman explains why she doesn’t want to work on Mondays; and finally another woman takes her clothes off in a supermarket.

Act Four is a very short call to arms, which subverts itself by acknowledging that calls to arms are bound to fail. In the calmest way, its vision of a post-revolutionary society with no men, no class division and no compulsion to work is utopian and momentarily beautiful. Although the whole play is ostensibly a piece of third-wave feminism, and extremely effective when it is at its most satirical, it also has a fairly middle-class English worldview, even when the cast adopt some lower-class accents. There’s little interest in other cultures, other ethnicities and other sexualities. At its worst, the spirit that propels the piece is one that embraces anarchy and irrationality, which has the effect of aligning women’s radicalism with unreason, even hysteria. And, lastly, Birch can’t resist the occasional speech that is too programmatic, too preachy, too explicit; she’s at her best when she doesn’t explain.

I loved Birch’s imaginative attitude to theatre form, the way that the play collapses under the weight of its own angry emotions, and its sharp insights into women’s sexuality, attitudes to relationships and sense of self. With dazzling economy, the playwright crosses a lot of territory and burns her way through all the usual obstacles. On the night that I saw this show, there were moments when the women in the audience whooped with the joy of recognition and delight. At the same time, some of the recurring imagery of the piece — nightingales, bluebells, melons, cheese and dogs — didn’t really make much sense to me, although I loved the way that the play is a compendium that turns into pandemonium.

Whyman’s production is starkly designed by Madeleine Girling, and it is smart, funny and full of intelligent fury. Her ace cast — Robert Boulter, Emmanuella Cole, Emma Fielding and Beth Park — all get a chance to shine, and the precise anarchy of Act Three is well put together. As a gesture, this is a fascinating and compelling piece of theatre — although it ends on a distinct note of sadness and disillusionment, which is the political flavour of recent years. This show takes the temperature of how (some) women feel in the 21st century, and Whyman embraces its wildness with love as much as cleverness. Its sheer bravado will bowl you over.