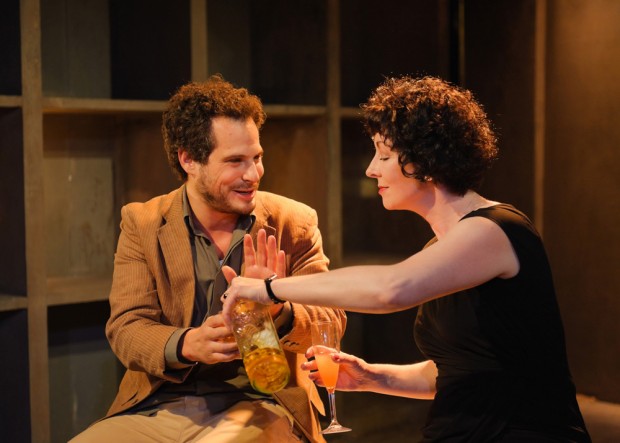 The Arab Spring has arguably been the most important international event after the credit crunch, yet it seems to be of little interest to British playwrights. Parochial, obsessed with writing only what they know, they have been put to shame by Hassan Abdulrazzak, an Iraqi playwright who was born in Czechoslovakia and now lives in London, working as a scientist. His 2007 debut, Baghdad Wedding, was a big hit, and his long-awaited second play is set in Cairo during the revolution that toppled dictator Hosni Mubarak.

To be exact, the date is 28 January 2011. While the people gather in Tahrir Square, confronting the police, where are the middle classes? Abdulrazzak zeros in on one thirtysomething couple, Hisham and Layla. Hisham is a former journalist who is now a novelist. He wants to be recognised internationally as well as just in Egypt. So instead of joining the demonstrators in the street, he decides to meet Suzanne, a high-powered literary agent.

Meanwhile, his wife Layla also faces a life-changing decision. She works as a senior engineer with Vodafone — itself a reminder that Egyptian society is more complex that our easy clichés about it — and is ordered by her boss Hani to close down the mobile phone network. He has just had a visit from Mubarak’s security men and they want to prevent the demonstrators in the street from organising. He also has a much more personal proposition for her (no prizes for guessing!).

Abdulrazzak’s question about how the more privileged classes respond to great historic events, when people are dying in the streets, is one that affects not just the more comfortable Egyptians. The gap between intellectuals who extol revolution but are not brave enough to participate in street violence is a familiar one all over the world. But he also makes the point that not everyone is a hero — for some people, even the idea of torture is enough to reduce them to obedience.

At the same time, Abdulrazzak rejoices in the ecstasy of the crowd. One of Layla’s wonderful monologues, delivered straight to the audience, is an eyewitness account of a massive demonstration. Detailed, ambivalent and humane, it is vibrant with truth, and conjures up the huge mass of ordinary humanity which, when it gets moving, is well-nigh unstoppable. Especially when the masses and middle-classes join together. When everyone wants a change, all rules are up for grabs.

The text of The Prophet is bright, sexy, dirty, critical, sarcastic and beautifully wrought. It buzzes with psychological insight and radical references; Abdulrazzak’s confident storytelling is faultless, and this play about betrayal and moral courage comes in the guise of a thriller. Last, but not least, the invented figure of the torturer Metwali, who keeps pigeons in his spare time, is both convincing and memorable. Like a therapist, or a novelist, he also has a view of the human heart.

Although the relationship between Hisham and Layla is a bit sketchy, this 100-minute play is immensely satisfying. Not only is the cruelty of torture, and our fear of it, vividly represented, but the debate about whether democracy will result in an Islamist state also gets an airing. The evening feels resonant and relevant, and the clash between pragmatism and idealism feels as urgent as ever. The jokes about sex, the British Council, sex, national identity, sex, and well, everything else, contrast brilliantly with the ethical seriousness of the play.

The Prophet is excellently directed by Christopher Haydon, the new artistic director of this venue and is part of his opening Resist! season. His cast — Sasha Behar and Silas Carson (Layla and Hani); Nitzan Sharron and Melanie Jessop (Hisham and Suzanne) — rarely put a foot wrong and Holly Pigott’s design and Dick Straker’s video projections help transport us to Cairo. Both thought-provoking and highly entertaining, this play is a real joy.