Home » Reviews » The Playboy of the Western World, Old Vic

The Playboy of the Western World, Old Vic 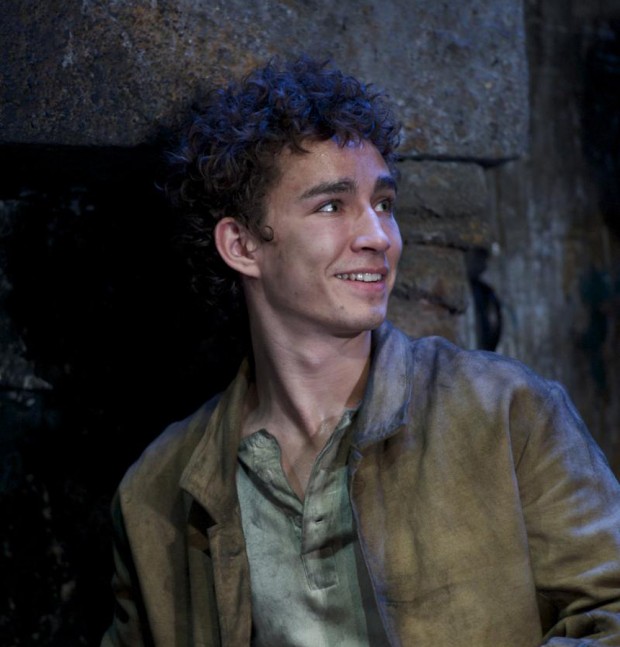 Coming out of this revival of John Millington Synge’s 1907 classic, The Playboy of the Western World, I was reminded of a truism: a great play is a play that stays great. Of course, no one expects a repeat of the riots that greeted the drama’s first production in Dublin, but the essentials of its magic are still all there: a tight plot, psychological truth, mythical contours and a sheer joy in the music of language.

The setting is the wild, west coast of County Mayo. A young man, Christy Mahon, creeps into Flaherty’s tavern, claiming to be on the run after killing his own father. Pegeen, Flaherty’s daughter and the barmaid, is enthralled by this story, much to the dismay of Shawn, her fiancé. Likewise, Christy is the object of the amorous attentions of Widow Quinn. In fact, Christy soon becomes a local hero. Starting off as a humbled runaway, he grows into a sexual magnet and larger-than-life character, excelling in the village’s sports competition and embodying the fantasies of the people. But his heroic stature is built on shifting ground and Synge’s story shows how he copes with adversity as well as success.

The greatness of the play lies not only in the intoxicating vividness of the dialogues, whose words and images keep tumbling out to amaze and tickle the audience, but also in the extreme accuracy of the story’s psychology. I don’t know if Synge read Freud, but he certainly understood the need for sons to kill their fathers and the attractiveness of the symbolism of parricide to a small community dominated by old men.

Synge also knew the power of storytelling and brilliantly shows how Christy gradually gains confidence in his own myth. As the village folk succumb to his heroic image, the play achieves a wider social resonance. How easy it is to fool the locals? Will they really end up being charmed and led by a young chancer? How can you trust the stories that politicians tell us?

This is also a play about hope and yearning. In the figure of Pegeen, Synge created an Irish woman intelligent enough to see that she has no future in a rural backwater and full of longing to meet a man mighty enough to appeal to her imagination of romance. Before our eyes, we see her fall in love with such an illusion – and then suffer the inevitable disillusionment.

This revival, directed by John Crowley, is a bit of a disappointment. Robert Sheehan, who is familiar from E4’s Misfits, makes his stage debut as Christy. Okay, so the show has its bankable star, but why was I unconvinced by his performance? He certainly grows during the course of the evening, but he looks and feels too insubstantial a character and too lacking in the poetry and desperation that the part demands. Similarly, Ruth Negga’s Pegeen looks pretty, but lacks the fire and guts that the character must have. There really is no real sense of fierceness in this slip of a woman, who looks as if she is ready to go to stoke the Aga rather than being desperate to leave her rural bog. As Widow Quinn, Niamh Cusack is more substantial, but in the end equally unconvincing.

Dissatisfied by the fact that Synge’s play takes place in one room — the tavern with its bottles and fireplace — Crowley’s production adds a couple of musical numbers and a set that slowly revolves, showing us (quite superfluously) the outside of the tavern (designed by Scott Pask). This kind of thing only succeeds in distracting us from the drama, which is here held back by some poor casting. Yet the play survives this rough treatment and reminds us once again that very few contemporary plays can match this work of genius