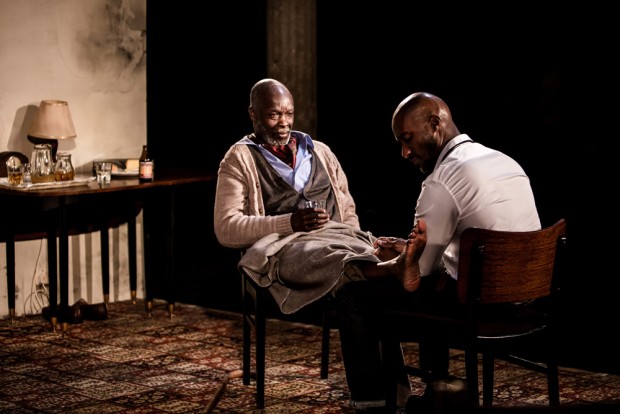 Plays about religious belief present something of a problem. How can theatre-makers, who tend to be very secular-minded, convey the mindset of believers without being patronising? And once they involve people from the developing world, how can they avoid being condescending to different views of humanity? Robin Soans’s new play, which starts in Barbados and examines the case of a gay son who returns to his religious family, stages these conflicts with unusual empathy.

Act One is set in the Barbados home, located in Perseverance Drive, of old Eli, a 70-year-old pastor in the Pentecostal church of the Christ is Risen. His wife, Grace, has just died and he has summoned his two sons, Nathan and Zechariah, for the funeral. They bring their wives, Ruth and Joylene, with them. A Pentecostal bishop, Marvin and his son Errol — who has abandoned his artistic aspirations to follow in his father’s footsteps — are on hand to lead the prayers.

Inevitably, at such a gathering, there is also one uninvited guest: Joshua. He is Eli’s middle son and gay. This means that he has been shunned by the righteous family members, and has not seen them for years. Yet he seems to be the most sensible man in the room. Soans neatly shows the narrowness of the religious mindset, balancing this by letting us enjoy the music that the cultists so evidently love. This is an all-singing, all-chanting religion, whose life-giving songs nourish the dry moralism of its message.

Act Two, set in Leytonstone, four years later, sees Eli in a bad state. He has moved to London but, like many old people, he has been abandoned by his children, despite their protestations of piety. Soans clearly outlines how their marital tensions and family antagonisms are expressed through religious ideology, and how such ideas are a cloak that conceals other concerns. A final showdown reveals the hypocrisy of the whole set-up.

But while Soans tells this story efficiently enough, his writing style is bland and could do with an injection of strong feeling. His attitude, unsurprisingly, is the traditional humanistic one — good works will redeem all the wrongs of the world. What’s missing is any real sense of conflict, any feeling of how hard it is to abandon long-standing beliefs. The sense of redemption here is purchased without the sweaty struggle that reality demands.

In the world of the play, religion is not a matter of real belief, but just a hypocritical veneer which covers family rivalries, ambition to succeed and repressed sexual desire. The love of art, which both Ruth and Errol understand, is more sincere than Bible study. As well as being traditional in its ideas, this drama is also traditional in its form. It’s basically a well-made play and family reunion drama, complete with crucial letters, family rituals and a hidden scandal.

With nothing to tax you either spiritually or intellectually, all there is to do is to enjoy the predictable unfolding of events, chuckle at the jokes, hum along with the music and agree that a good gay son is better than a stony-hearted brother. There are some good lines, but this is a sadly bloodless and passion-free evening. Madani Younis’s production manages to avoid being either condescending or patronising, and is well cast, so there are some enjoyable performances.

Leo Wringer is an intense and in the end intensely moving Eli, and Clint Dyer’s Joshua delivers a well-rounded character study. Other memorable moments include the imposing Ray Shell as Bishop Marvin and Frances Ashman as the sensual and thoughtful Ruth, playing opposite Lloyd Everitt’s young Errol. Derek Ezenagu and Kolade Agboke do good work as Nathan and Zechariah. And Akiya Henry performs a comic turn as Joylene. One scene, the funeral in Barbados, has an excruciating clash between comedy and discomfort, but in general there is little here that is genuinely exciting.