Peggy for You, Hampstead Theatre 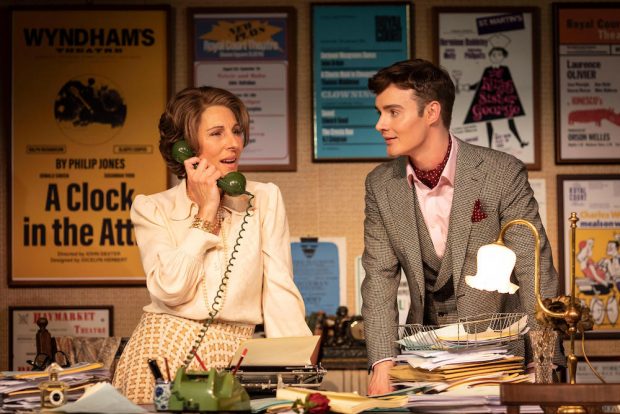 Peggy Ramsay is a theatre legend. Around the time of her death in 1991, the Australian-born agent was honoured with a meticulous biography by Colin Chambers and a personal memoir by Simon Callow. You can easily see the appeal of her character, which was notoriously “difficult”, eccentric, outrageous and outspoken — and one of the most anecdote-rich in theatre history. Now the Hampstead Theatre is reviving Alan Plater’s comedy about her life, which was first staged at this venue in 1999, this time with veteran Richard Wilson directing and starring Tamsin Greig. But is this revival, the last of the venue’s 60th anniversary celebrations, instructive as well as entertaining?

The play is set in Peggy’s Godwin’s Court office in St Martin’s Lane, an elegant place with a controlled chaos of scripts, letters and other dust-hungry papers, and describes a fictional 1960s day in the life of this extraordinary theatre agent. As dawn breaks, she is lying on a chaise longue fully dressed. She’s spent much of the night at a police station. Bailing out one of her clients, who was the worse for wear because of drink. Her day involves three meetings: first with fledgling playwright Simon, then with hot-shot Philip, who is at the height of his powers, and finally with Henry, a more cynical northern has-been. All are metaphors for the stages of Plater’s own career. While Henry is with her, Peggy is told that another client has killed himself, and at first she is completely unmoved.

On its original production Plater’s play was already dated. Peggy is an opinionated eccentric, but that doesn’t mean that everything she says is either right or attractive. Whereas the pronouncements of some of her clients — such as Edward Bond, Joe Orton, David Hare or Caryl Churchill — have stood the test of time, hers really haven’t. At least, that’s the impression conveyed by Plater, who was also one of “her” writers. His Peggy can’t remember the name of her secretary, hates Hollywood and the telly, despises writer’s wives and bad-mouths northerners (cue jokes about Scarborough and Hull). This would be unsurprising for a drama written in the 1960s or 1970s, but for a 1999 play it’s a touch woeful. I mean, wasn’t that the in-yer-face decade, when British playwriting rediscovered its anger and vigour?

Plater clearly believes that Peggy’s opinions are worth savouring. But are they? Okay, she is an example of the old world where you could believe in the power of art and see writing as a form of personal mission. Art is good for you, she implies, even if it is hard to appreciate and even harder to create. Her recipe: don’t get married, have sex with prostitutes and avoid children. It’s a mix of class snobbery and contempt for normality. It is oddly anti-female. It’s not very attractive. So if the show suggests that her clients needed such an agent as an inspiration, her focus on the “work” also adds to the myth of new writing as the central characteristic of British theatre after Look Back in Anger. In fact, her excitement about great plays leads to a corresponding denigration of any writer who is not suffering and producing art. She hates money-making populism.

Peggy for You also attempts to answer questions about the nature of its own art. At one point, Simon asks, “What is a play?” The answers from his agent’s regular clients come in the form of jokes, and evasions. But Peggy does answer Simon’s question. She argues that a play should take the audience across a bridge to somewhere they have not been before. It should suggest a journey too another place, a clearing of metaphorical mists and a greater understanding of humanity. A tough ask. And if Plater’s play cannot really do this, it does provide a humorous portrait of late 1960s theatre and a picture of Peggy that emphasizes her more exasperating characteristics. In the end, although there is a moment or two of real vulnerability, she really comes across as monstrous.

Richard Wilson’s production tries valiantly to breathe some life into this comedy, whose gentleness is more in evidence than its satirical bite, although the arrival of Henry in the second act means that the laugh content rises appreciably. Before then, there are passages where the best thing to do is zone put and admire James Cotterill’s set, whose  olde theatre posters are a delight. Still, what saves the evening is Tamsin Greig. Her performance is energetic and nuanced, helped by the fact that she has all the best lines. For her Peggy’s steeliness is just indifference, her scantiness is careless selfishness. She simply doesn’t feel for people — unless they are productive artists. Eek! Greig is well supported by Josh Finan (Simon), Jos Vantyler (Philip) and a hilarious Trevor Fox (Henry), with Danusia Samal as secretary Tessa (real name Stephanie), who tries her best with an under-written part. The main thing to be learnt from this revival is that some plays are not very good at time travel. This Peggy might be good for you, but it’s not for me.