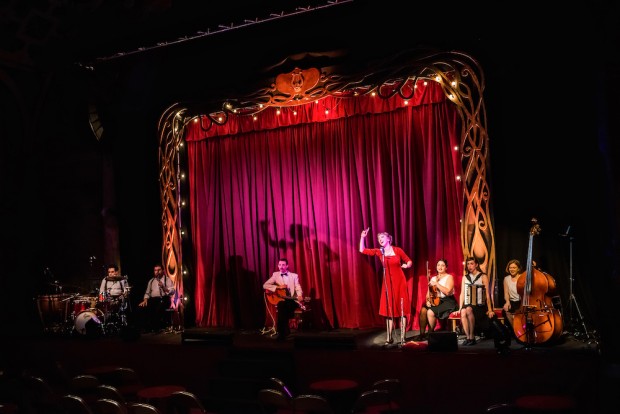 Superlative. It might seem odd that it is this show, a retelling of a Greek myth, and not a piece of raucous new writing or a state-of-the-nation drama, that suddenly and quite unexpectedly made me feel that theatre is a superlative art form. That it touches the emotional parts that other media simply don’t. But that’s exactly how it was for me. And, to pile superlatives upon superlatives, this venue is the ideal place to see this piece of magical storytelling. The Battersea Arts Centre’s Grand Hall, which was devastated in a fire in 2015, reopened in September, and it is so beautiful. With its new decorative lattice ceiling, lovingly distressed walls, and the surrounding bars and corridors, the whole place is more buzzy than ever. It’s celebratory reopening season is called Phoenix, and it really is a wonderful resurrection.

Little Bulb, an award-winning company of actor-musicians which is based in the South East and tours nationwide, has revived their version of Orpheus, and the result is breathtaking. First staged in 2013 and again in 2014, the show was originally developed for the Grand Hall and so this is something of a homecoming. The conceit is elegant and engaging: Little Bulb has turned the hall into the Quintette du Hot Club de France, in 1930s Paris (where else?), and our hosts are the three-fingered jazz legend Django Reinhardt and chanteuse Yvette Pépin, an unforgettably charming and comic presence at the mic, who also play the roles of Orpheus and Eurydice. This device of a staging a Greek myth within the frame of a historical nightclub works superbly well.

Just to recap this tragic love story: Orpheus, the supremely gifted lyre player whose music can charm even beasts, falls in love with the beautiful Eurydice, and the couple marry. But, alas, their perfect bliss cannot last. She is bitten by a snake, and dies. After grieving in song, Orpheus descends into the underworld, crosses the Styx, and meets Hades, god of this stygian realm, and his wife Persephone. After Orpheus plays for him, Hades allows him to take Eurydice back into the light of life, but on one condition: she must walk behind him and he mustn’t look at her until they arrive above ground. Orpheus agrees, but — just as the couple are about to re-enter the world — he looks behind, and Eurydice vanishes for ever.

Like other Greek myths, this one has a message: it teaches us the virtues of deep patience and good faith, and warns us not to distrust the gods. It symbolizes masculine anxiety and questions the prerogatives of genius. Orpheus is a heavenly musician, but his lack of trust means that he loses the chance of his love being resurrected, brought back to life from the underworld, the realm of the dead. It is also a tale of deep sadness, grief and mourning. Another version, of course, is found in the Biblical story of Lot’s wife. In each case, the injunction is not to look back, but to obey the instructions of the gods to the letter. Tough times.

Little Bulb’s version is marvelously playful and deliciously funny. While guitarist Dominic Conway is Django (Orpheus) and flautist Eugénie Pastor is Yvette (Eurydice), the rest of the cast play the other instruments and all the necessary parts, from nymphs to spirits, from the three-headed dog Cerberus to Hades and Persephone. The music is an enchanting mix of Rheinhart and Grappelli songs from the 1930s, with additions from Edith Piaf and Marguerite Monnot. There are great blasts of Bach, Saint-Saëns and Debussy, along with original compositions. All the while, Yvette is the compere, and Django leads the musicians. The result is captivating, and the acting, with is vividly cartoonish and wonderfully silly, is light-hearted and funny.

This is a world of exaggerated gesture and physical comedy, with outrageously humorous dancing nymphs, sinister nether regions and melodramatic loves and deaths. Leaves fall from human trees, petals are strewn and the ghosts of Monteverdi and Purcell are conjured up. The snake is a puppet. Mary Drummond’s set is flanked by red velvet curtains and crowned by a lyre, and its raised proscenium works well with the tables of club goers, which are audience members who can enjoy food and drink (cheese and champagne) while the entertainment unfolds. After an interval, during which more drink arrives, there is a musical interlude, during which you might even get the chance to dance with Yvette.

Amid the clowning and hilarity of this event theatre, there are moments of moving emotion. Devised by the whole company, and directed by Alexander Scott (clarinet), the show is headed up by the comic genius of Pastor and the lightning fingered dexterity of Conway, whose Orpheus has the ability to pull the saddest of faces. Percussionist Tom Penn sings the beautiful falsetto song “La Chanson de Persephone”, while the Triplets — Miriam Gould (violin), Shamira Turner (accordion) and Clare Beresford (bass) — keep the comic energy on the boil. All along, Charlie Penn (piano) holds things together. At the end of a year of ghastly Brexit divisions, this is the perfect escape; really sublime! A magical evening. And the audience was ecstatic! Rightly so!