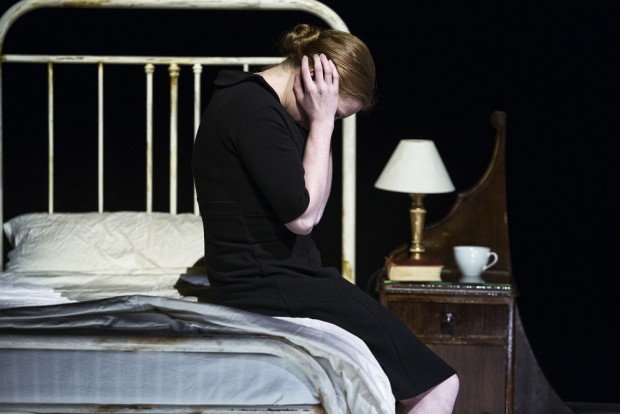 A room of your own can be a prison as well as a sanctuary. In Ophelias Zimmer (Ophelia’s Room), playwright Alice Birch and director Katie Mitchell take a look behind the scenes of William Shakespeare’s Hamlet to explore the inner life of the young woman who is the object of the Danish prince’s attentions, if not exactly affections, and who in the original kills herself by drowning. In this atmospheric production by the Schaubühne theatre of Berlin, which visits London for a week only and is performed in German with English subtitles, we get a thrillingly intelligent interpretation of this character in a production that manages to be both compelling and frustrating.

In Shakespeare’s original, Ophelia is more of a device to illustrate Hamlet’s state of mind — passionate, changeable and unpredictable — than a fully rounded character. To her old father Polonius and her brother Laertes she is a virginal girl who must be protected, kept pure before making a suitable marriage. To Hamlet she is an object on which his sexual and romantic feelings can be fixed, and his belief that she has deceived him results in angry outbursts. In the play, one theory is that the contradictions between the very different expectations of the menfolk drive Ophelia mad.

In Birch and Mitchell’s version, this situation is fleshed out and a backstory is provided that makes sense of the character. Like Tom Stoppard’s Rosencrantz and Guildenstern Are Dead, the play follows the action of Shakespeare’s original but focuses on a minor character: so we see Ophelia receiving Hamlet’s letters (audio cassettes, which are romantic, crudely lascivious and finally mindlessly aggressive), obeying the summons of Polonius, putting up with her daily routines, enduring Hamlet bursting into her room and then seeing the corpse of her father. Her maid is her main contact with the outside world, and she supervises her, and then helps prepare her to see the play, and attend the funeral of her father.

It’s a brutally stark picture of human isolation. Ophelia has no friends, only the everyday habits of a prisoner. Mitchell emphasises this by using the technique of repetition with minor variation to show this young woman getting up, dressing, obeying her father’s summons, receiving flowers and letters from Hamlet, reading, sewing and then going to bed. Then repeating this sequence. And then repeating it again. Conscious that real life is happening elsewhere, Ophelia looks out of the window, and follows the movements of those freer than herself as they walk beneath her room in the comparative liberty of the outside world.

The constant repetition of a limited repertoire of actions has the experiential effect of forcefully showing us the depressed and solitary state of Ophelia’s life. She is not only isolated, she has been pummelled into acute depression. Her lack of affect, her miserable lifestyle and her powerlessness all tell the same story: she is psychologically oppressed. Birch’s text suggests some reasons for this. Ophelia’s mother, now dead, was incarcerated because she was mentally ill so her daughter grew up constantly separated from her. Perhaps because of the limited opportunities for women, Ophelia was taught to be self-effacing and unobtrusive. To protect her virginity, her father has confined her to a room that is puritanically bare and basic.

Structured in five sections, which with reference to her method of suicide as well as to an apt metaphor for her life, are called The Five Stages of Drowning, Ophelias Zimmer is beautifully written, but hard to endure. Of course, the point is that Ophelia’s life is hard, so two hours of repetition and affectless acting is exactly right, but it does mean that some aspects of this open feminist reading of the character are compromised. It is hard to either sympathise or empathise with this Ophelia. She is not only isolated from Elsinore society, but also from us the audience. It’s a curious kind of feminist reading that doesn’t in the least celebrate women, but instead represents them as total victims. Polonius is clearly imprisoning his daughter, and her brother Laertes never appears. Likewise, there’s something uncomfortably reactionary in the suggestion that Ophelia’s psychological misery is the fault of her mother, or that her family has some genetic flaw which sees depression passed down from one generation to another. At one point, we discover that Ophelia’s mother wanted her to be a boy.

Mitchell’s production has a bleak deep-black set designed by Chloe Lamford, and comes with its own share of problems. It is typically humourless, and didactic. As in some of her previous work, she uses the actors to produce the show’s sound effects — mainly feet walking and running up and down the stairs. I have to say that this adds nothing to the effect of the piece except as a distraction from the intensity of the acting — Jenny König as Ophelia, Renato Schuch as Hamlet and Iris Becher as the maid, all of whom are committed and brave. But, despite the organised tedium of the show, I did like the tribute to Sarah Kane in the choice of Joy Division’s “Love Will Tear Us Apart”, with its brilliantly evocative line: “Why is the bedroom so cold?”

In fact, the song’s opening verse might easily sum up the experience of watching the whole production, which ends up like Sean Holmes’s version of Herons with cast splashing about in five inches of water (Ophelia drowns, geddit?), “When routine bites hard,/ And ambitions are low,/ And resentment rides high,/ But emotions won’t grow”. In the end, with its enormous expense, short run of five days, German language and gruelling sensibility, this feels like elite theatre for a coterie audience. Why can’t the Royal Court, which boasts of being a New Writing theatre, stage an English-language version with a proper run? Wouldn’t that be more democratic?