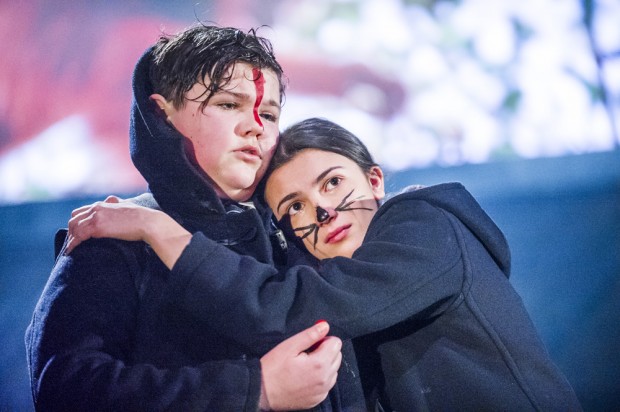 Be careful what you wish for. I’ve often moaned about the fact that British theatre is too naturalistic, and that its stagings are too banal, full of quotidian detail and a specific sense of place, but strangers to the wildness of the imagination. So I have found myself wishing for more exciting settings, and bolder directing. And here at last comes one solution to the miseries of naturalism — a boldly staged revival of master penman Simon Stephens’s 2001 play, Herons, directed by this venue’s artistic director Sean Holmes.

When I saw the first production at the Royal Court’s studio space, I found this rather slim 80-minute drama both unspeakably vicious and desperately moving. Set around the lock of the Limehouse Cut and the Lee river in the East End of London, it concerns a group of young working-class teenagers, anything from 13 to 15 years of age. The hero is little Billy, whose thirtysomething mother Michelle has a drink problem, and he lives with his father Charlie, and enjoys fishing with him. The herons of the play’s title are both their fish-loving competitors and a symbol of flight from their rather impoverished lives. But trouble is brewing because Charlie has antagonised some local youngsters by informing on one of their murderous relatives to the police. So Billy finds himself threatened by teen thugs Scott, Aaron and Darren. Only Adele, a 15-year-old with a conscience, dares to befriend him.

Stephens’s writing here is characterised by filthy language and frayed nerve-ends, and its best passages powerfully articulate the amazement and bewilderment of the young teens with a freshness and sympathy that could, and should, be touching and even warm. The in-yer-face violence of the bullying is dreadful to watch, and the sadness of Adele’s already damaged character contrasts with Billy’s more optimistic nature. Then there are the bullies. As well as their grim behaviour, there is a certain undeniable fierceness in the relationships (in one gobstopping incident, Billy attacks his estranged mum with a ferocity that is hard to forget). Yet with the typical poetic realism characteristic of this playwright, there are also passages of lyricism that stand out like the flashes of the heron’s feathers.

Except that, in Sean Holmes’s misguided production, they don’t. The problem starts with the set, designed by Hyemi Shin, which features a featureless lock and a playground which is under two or three inches of water. When I first saw this, I almost laughed: I know we’ve had the wettest December in years, but this is ridiculous. The aqueous surface means that the cast of teens — for some reason dressed more like public-school kids than East Enders — have to splash about to get anywhere, which is distracting and often plain silly. Above the set, a video loop shows wildlife footage of monkeys, which refers to lines in the playtext such as “Billy, your dad is a fucking monkey”, but has the presumably unintended effect of suggesting that working-class people are animals.

Other images also don’t really work. The first thing that happens in the play is that Scott arrives on stage and blows air into a sex doll: it’s a vivid image, except that it has nothing to do with this play. As well as smoking and drinking, the bullies also blow bubbles, a visual comment on the twice-repeated refrain that children aren’t allowed to be children any more. For some reason, the teens paint their faces like outcasts from The Lord of the Flies. And when a something-pound note is extorted from Billy, it is immediately torn up in front of his face and thrown into the wind. Do teens really behave like this — I mean, in the real world?

Of course, I do know that both Holmes and Stephens dream of creating German-style imaginative theatre, and I’d love to see that too. But why does it have to be at the cost of emotional truth and artistic coherence? Remember Three Kingdoms? In the programme, assistant director Lucy J Skilbeck describes the rehearsal process as “smashing” up the play, and says that dramaturg Joel Horwood reordered and cut up the material. Not for the first time, this has resulted in little gain, and a lot of loss. The piece now reads better than it plays.

But perhaps the saddest thing about a thoroughly sad and unengaging evening is the way that Holmes has been unable to find an acting style to replace the usual naturalism that makes this tale psychologically compelling and emotionally deep. His very young cast, some of whom are making their debut, struggle to make sense of this artificial world. Still, Max Gill’s Billy and Sophia Decaro’s Adele have some attractive and vulnerable moments, while Ed Gaughan and Sophie Stone are solid as Billy’s separated parents. The bullies — Billy Matthews, Moses Adejimi and Ella McLoughlin — have a few good passages, but often get bogged down in the watery dampness of the stage. I felt sorry for them all.

So while I will continue to advocate more imaginative stagings of contemporary plays, I really have to say that in this dismal evening there is a wretched disconnect between the emotional world of this underclass story and the way it is presented, full of declamatory acting and exaggerated gestures, stylised movements and unconvincing posturing. The result is another example of the demonisation of the working class, and the way the audience laughed on press night confirms this, as well as another mercifully brief chapter in the middle-class adoration of lower-class violence and especially gun violence. If an artistic team really can’t improve on a drama by making it more exciting visually and aurally, maybe they should just allow it to remain as emotionally true as when it was written, and not monkey around with it.