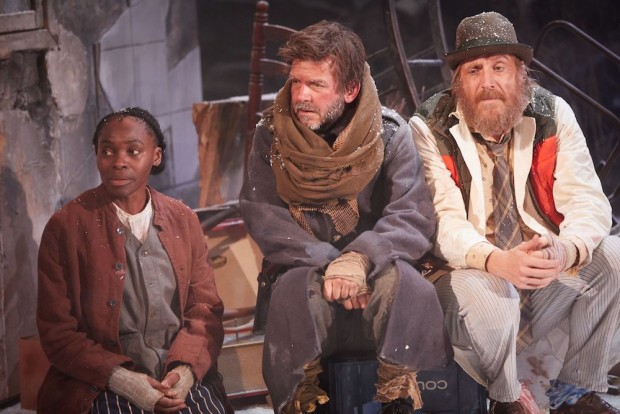 Memory involves places, people, things and words, especially words. This abstract proposition is given knotty life in Welsh playwright Ed Thomas’s extraordinary new play, On Bear Ridge, which comes to the Royal Court after opening at the Sherman Theatre in Cardiff last month. Over a compellingly Beckettian 85 minutes, conceived and staged as a rare example of metaphysical theatre, he shows how the decay of language eats away at memory, identity and life. Yes, it’s a grim story of loss in a metaphorically resonant absurdist fable. And one in which Rhys Ifans performs a masterclass in tragicomic sensibility.

Perched on an obscure mountain top which could be anywhere, Bear Ridge Stores is a family business which once provided meat and groceries to the local population. It is run by butcher John Daniel (Ifans) and his wife Noni, with the help of their young slaughterman, Ifan William. But an unspecified catastrophe has depopulated the whole area, and the shelves of the store are bare. On the verge of starvation, in the middle of winter, the three survivors have to confront the unexpected arrival of an army Captain. He is apparently part of a military operation to ethnically cleanse the mountain, but has also to deal with his own inner demons.

Deprived of meat, the survivors have words. John Daniel says that he can speak the “old language”, and uses vivid images of rooms and corridors to explain how this ancient tongue is a repository of memory, of his life story. Of reality itself. Although Noni cannot remember this local language, she has a rapport with her husband which enables her to understand his elaborate explanation of such odd habits as refusing to put on his trousers, on the surreal basis that if he does so he might wear them out. While Ifan William shares this ability to speak the old words, it also emerges that both men use it to remember Twm Siencyn, the couple’s now dead son.

Thomas writes in a flinty prose that mixes a Beckettian incantatory bleakness — “Nothing moving. Nothing growing, Snowing heavy” — with absurdist comedy and metaphysical speculation. He slowly builds up a picture of loss, and the ungainly grapple between hope and despair. The fate of Twm Siencyn, who once went to university before the forces of nationalist insurgency destroyed society, acts as a potent metaphor for the sense of unease that many Western countries feel in the face of today’s resurgent populism. Despite its rather abstract quality, On Bear Ridge has enormous symbolic resonance.

The portrait of the slightly spiky, but often affectionate, relationship between John Daniel and Noni is immediately recognisable, and this couple of life’s survivors — he dressed in pyjama bottoms, bloody butcher’s apron, fleece and “this gilet you bought for my birthday”, she in layers of woollens — are a picture of resilience against the odds. And the odds are huge: as John Daniel worries about losing his memory, which he views as a part of their cultural heritage, the unexpected military guest, with his gun, which once drawn will have to be fired, symbolises the march of history.

The production, a joint venture between National Theatre Wales and the Royal Court, successfully mingles humour with its serious vision of social breakdown. Although the idea of losing your old language must have had a particular local force in Wales, the drama’s themes are nevertheless universal. Thomas himself directs, along with the Court’s Vicky Featherstone, gradually deconstructing designer Cai Dyfan’s naturalistic shop to expose the cold wilderness outside, and focusing the attention on the acting. Ifans clearly relishes John Daniel’s wonderfully quirky monologues, conveying both his character’s existential rage and his inner confusion.

Likewise, Rakie Ayola plays Noni with a down-to-earth resilience, which avoids sentimental sweetness and anchors the couple in the here and now. Sion Daniel Young as Ifan William is at first a gawky comic foil, but matures into a fully rounded character who has lost more than is at first evident. As the interloping Captain, Jason Hughes embodies a constantly smouldering threat while simultaneously conveying a sense of severely traumatised being. Bewilderment junction. The integrity of these performances roots the tragicomedy in humanity, enabling us to empathise with the characters despite the toughness of the story and the frigidity of the imagined stage world.