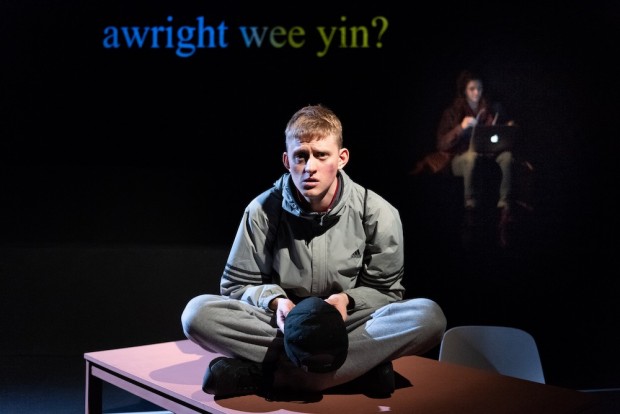 There are plenty of plays in which a character finds their own voice. But what about stories which show a conflict over who owns the life story of another person? Kieran Hurley’s Mouthpiece, which was first staged at Edinburgh’s Traverse Theatre in December last year and which now visits this London venue, sets out to untangle the ethical issues involved in the question of who has the right to possess any individual’s life story? And by possess, I mean exploit. But it’s also a rather touching story about two lonely individuals whose friendship crosses the divides of class and age, until the brutal logic of their encounter results in tragedy.

This dynamic two-hander begins with a death averted when Libby — a depressed Edinburgh resident who has decided to end it all by throwing herself off the Salisbury Crags — is pulled from the brink by Declan, a working-class teenager who uses this remote spot to get away from his troubled family life. At first, the two have nothing in common; then Libby, a playwright who has lost the gift of words, discovers that Declan can draw. She decides to help him by taking him to art galleries and praising his work but then finds that his stories begin to inspire in her a desire to write a play. But where does inspiration end and exploitation begin? As Declan memorably puts it: “It’s all very well wanting tae be a voice for the voiceless eh. Until you find oot the voiceless have a fucking voice and mibbe they might want tae use it.”

What strikes you immediately is that this is a story about class. Libby is middle class, from a good part of Edinburgh; she’s a 46-year-old professional playwright who’s known success; she’s been to London. She speaks BBC English. By contrast, 17-year-old Declan is one of the urban poor; his family life, with a step-Dad and little money, is chaotic and he has been thrown out of college. He speaks with a strong working-class accent; he lives on a council estate. With class comes power: Libby knows that knowledge is power — she knows about art, about theatre, about culture. Declan is the opposite: he may be canny, but he is also ignorant. And powerless. He is a promising artist but has no idea what to do with his talent. And that makes him victim material.

Yet this is also a story about human connection. Love even. Despite the barriers of class and age. Living with an alcoholic mother, Libby is lonely and down; she is unable to write, disillusioned with the theatre system, and sees no future. Likewise, Declan says he has no friends, and his main concern is to protect his little sister Sîan from step-Dad Gary. In this abusive situation, being alone with his drawing is a great escape. As this odd couple meets again and again, Libby is inspired not only by Declan’s pictures, especially the one called Mouthpiece but also by his life. And they do make a connection: Declan loves their visit to the Scottish National Gallery of Modern Art; when they get stoned together, they enjoy a rapturous dance. But can this mutual attraction survive Libby’s desire to write an edgy play about her new edgy friend?

Libby calls her play Mouthpiece, and another theme of Hurley’s play is cultural tourism. As Declan soon understands, Libby is attracted by the bad stuff of his life. His jokes are vulgar; his stories are frightening. There is violence; there is wildness. Libby is happy to take a day trip into his reality, but as an excruciatingly embarrassing sex scene shows, the emotional effect of their friendship is inherently unstable. Libby can’t be a resident in Declan’s reality — just a tourist. Or worse. When she appropriates his story for her own art it begins to look like outright theft. The powerful becomes a vampire on the powerless. The culturally sussed grabs the life of the culturally marginalized. It can only end badly.

Hurley writes with an intense energy and great pace so his story swerves between wild hilarity and acute irony. Some of the jokes are great. Each episode is linked by Libby doing a public talk on playwriting, and, as she explains the rules of storytelling, Hurley illustrates them with his play. If you think that his overall story could equally be viewed as cultural appropriation, raising the same issues of authenticity and representation as Libby’s play does, you’d be right. This becomes a meta-theatrical festival. In a final twist, the neat shape of both the play and the play within the play is contested by Declan, who points out that reality doesn’t have a neat shape. To press home the point the stage gradually gets messed up with the detritus of violence.

Directed by Orla O’Loughlin, the outgoing head of the Traverse, this 90-minute drama can boast two exceptional performances by Neve McIntosh and Lorn Macdonald as Libby and Declan. McIntosh suggests her guilt at what she is doing to Declan as well as openly showing her gratitude to a boy who is both charming and who has saved her life. Macdonald mixes a sense of real desperation with a vulnerable side whenever he talks about his “wee” sister and has an amusingly offhand attitude to his character’s creativity. Their onstage rapport makes the play often moving, while Kai Fischer’s set, with its dark steeply raked steps and background projections of significant lines, all add to the piece’s deeply emotional effect. This is a really welcome visit to the Soho Theatre, whose new creative director David Luff looks set to bring back some of what this venue used to excel at: the best of British new writing.