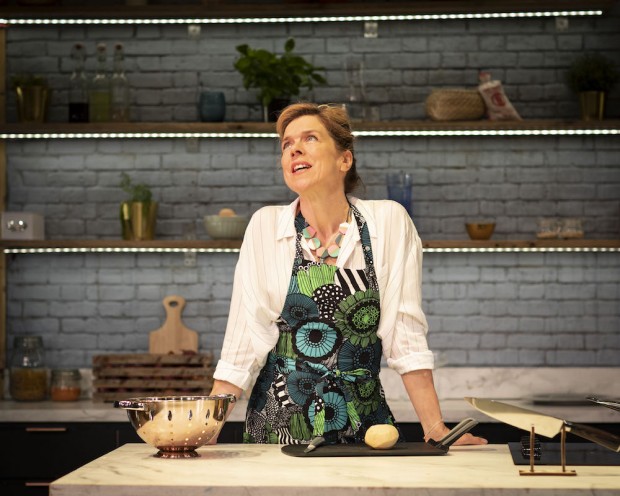 Forget about dark alleys, deserted parks and slippery slopes: the most dangerous place in the world is likely to be your family. That’s where the traps are, the minefields and the surprise betrayals. As its title suggests, Torben Betts’s new comedy is all about failing marriages and imploding families. The focus is on a celebrity chef, but does Betts have anything new to say about the state of our emotional nation, or is this just another rehash of the same old ingredients? After a national tour, Monogamy comes in to the Park Theatre — and boasts Janie Dee and Charlie Brooks in its cast.

The central character is Caroline Mortimer (Dee), acidly referred to as the country’s second-favourite television cook, and the story begins with her rehearsing for the last show in her current series. But the highly glossy home kitchen that she uses for her public work as well as her private life is about to explode as her family implodes. Betts sketches out the menu with great speed: Caroline is married to the aged Mike, a reactionary retired banker who spends most of his time on the golf course, and they are expecting the return from Cambridge of their son Leo, who has just graduated with a first-class degree. But all is not well at home.

For a start, Amanda, Caroline’s new personal assistant, has some rather bad news. The Mail on Sunday has got hold of some embarrassing photographs of the drunken Caroline, and it looks like they are going to publish them. Also, Graeme, a carpenter who has been helping with home renovations for four months, seems to have a much closer relationship with Caroline than her husband Mike has (as well as attracting Amanda). And Graeme has been foolish enough to leave his phone at home, where his troubled wife Sally (Brooks) has read some text messages that he really should have deleted. So Caroline is about to get caught in a shitstorm, while things are not helped by the fact that she hasn’t told Mike an important fact about their son. And Leo is determined to put this omission right.

The main trouble with Monogamy is not so much its conservative form — and it really is quite traditional in its clunky exposition, character stereotypes, and reliance on one-liners for laughs — but that it has so little to say about its main subject. At first, the fact that Caroline is religious seems to be promising: will there be a debate about where monogamy comes from? Has it been ordained by God? Or is it a Darwinian adaptation? Or, as a long playtext epigraph from Christopher Ryan and Cecilda Jetha’s Sex at Dawn, suggests, is monogamy profoundly unnatural? Or will there be a debate about the conlict between marital happiness and religious morality? Interesting ideas, but sadly they are not explored here. Instead, every marriage is just shown to be fragile. As if we didn’t know.

Betts’s writing is a very odd mix of comedy and tragedy, the kind of play that constantly wrong-foots you, throws you off balance — and not in a good way either. Just when you think it is a funny play about families, Betts lobs in a savage phrase or a speech about something terrible: an incurable disease, a horrible death, or a bad psychological condition. For a comedy this is something like finding glass in a custard pie. As the evening wears on, each happy family is revealed to be desperately unhappy. But this is no revelation because it as predictable as death.

In these circumstances, not only are the kitchen cupboards full of skeletons, but these bags of bones are rattling from the off. Even worse than this is the thinness of the characterisation: Caroline is the classic troubled middle-class celeb, Mike is the big-mouth rich guy, Amanda the kooky drug-taking working-class lass, Graeme the taciturn worker, and Sally the pill-popping wife. Each of these individuals are given speeches in which they clearly tell us, as if we were kids, exactly what they are thinking and feeling, and why. It’s as if there is no such thing as subtext, subtlety or indirection.

For a comedy, there are not enough laughs. Although Betts is perfectly skilled at delivering humorous dialogues, in Monogamy there is very little sun, but plenty of glowering darkness. Even more worryingly, the most prejudiced character, Mike, gets some of the most passionate lines. What he shares with his wife is a love of drink, and the story is an alcohol-fueled binge. Not very funny. Caroline herself is too self-absorbed to be interesting, and she spends too much time saying sorry, feeling sorry (mainly for herself) and misunderstanding what is happening to her and hers.

Having said all this, director Alastair Whatley does make a good stab — a knife is produced at the start of the play, and in typical Chekhovian fashion does its worst at the climax — at delivering an enjoyable evening, screwing up the tension as the characters get increasingly screwed up. Designer James Perkins has created a perfect celebrity kitchen, and the play is well cast: Janie Dee is always watchable, and excels as the bemused and self-regarding Caroline, although I was never convinced that she was either a celebrity chef or a Christian. More convincing are Patrick Ryecart and Charlie Brooks as Mike and Sally, with Ryecart’s facial grimaces a lesson in comic grotesquerie. Genevieve Gaunt’s stoned and often very funny Amanda, Jack Sandle’s stolid Graeme and Jack Archer’s sensitive Leo are all fine. But, even for a black comedy, the evening has a unpleasantly bitter aftertaste.