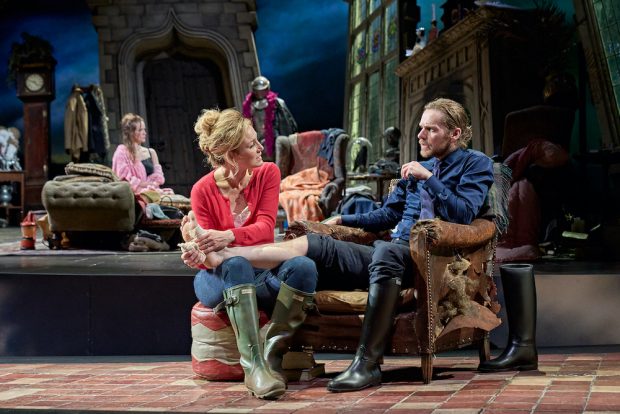 After the tidal splash of monologue plays has ebbed, British new writing is now paddling in the pools of state-of-the-nation drama. At the Royal Court, there is Al Smith’s Rare Earth Mettle, while the National Theatre is staging Moira Buffini’s Manor, a play set in an English country house, the traditional metaphor for examining the condition of the country and its peoples. Both plays, of course, engage with the hot — or should that be gently warming? — subject of climate change. So, after a gap of more than five years, I was initially excited to see Buffini back at this flagship venue, especially with a cast led by Shaun Evans, whose acting skills have been admired by television viewers, myself included, in series such as Vigil and Endeavour.

Set in the great hall of an ancient manor house, the story centres on Diana, the lady of the domain, who inherited this venerable, now rapidly decaying, pile but is currently in deep trouble — bookings for the Wedding Barn are down and neither she nor her equally decaying, and drug-addled, rock star husband Pete have the money to survive. As their daughter Isis struggles to make sense of the family accounts, the whole country around them is being whipped by a savage biblical storm, which throws thunder, lightning and flood water at the estate, submerging the country lanes and devastating the fields. Yes, it’s a gothic moment in which the building’s supernatural nature tap, tap, taps at the edge of our consciousness — here be ghosts.

The howling wind and torrential rain also blow in some unexpected guests, which creates a scenario familiar from countless Agatha Christie country house mysteries. You know the kind of thing: odd strangers, a dead body and a power cut. The arrivals include Dominic, the aged vicar, Ripley, a black NHS nurse and her teenage daughter Dora, soon followed by Ted (Evans), a right-wing extremist, Anton his mixed-race henchman and Ruth, a blind fascist academic. Plus Perry, a troubled unemployed man whose caravan has been trashed by the storm. As Ted, a charismatic fanatic who leads a group called Albion, attempts to shake off his fiancé Ruth, recruit Perry and take over the manor as his new HQ, resistance is led by Ripley, while Dora befriends the lonely Isis.

As a dozen emotional currents ripple around the relationships of these individuals, the play’s big ideas blow through the piece. As well as climate change, which is seen as the Earth’s revenge on white European colonial capitalism, and which maroons the characters by cutting off their phone and internet connections, the theme of national identity stomps its way into this hallowed dusty English hall. Ubermensch Ted and Ruth advocate a terroristic third crusade against the Muslims, while also recruiting people from diverse ethnic backgrounds in order not to appear racist. Perhaps the best passages are when Evans’s Ted manipulates his ardent follower Anton or tries to recruit Perry, showing a canny ability to psychologically exploit human weakness and desperation.

But the trouble with Manor is not only that its central themes gets drowned in a flood of incidental material — from the state of the health service to lesbian love — but also that it can’t make up its mind whether it is a farcical comedy or a serious anatomy of our septic isle. While some of Buffini’s eccentric characters come vividly to life, her Lady Diana feels so unconvincing that even Nancy Carroll struggles to make her credible. Her relationship with Pete seems unnecessarily antagonistic and her rapport with her daughter cool to the point of freezing — all this makes it hard, if not impossible, to sympathise with Diana or her family, which fatally cools the dramatic temperature.

By contrast, Evans manages to make Ted a good study of enigmatic political leadership. Is he really a convinced white supremacist, or is he using the far-right to advance his lust for power? Although he is ambivalent about his fiancé Ruth, he cannot conceal his old-fashioned masculinist views about women’s place in society and his attraction to Diana is based on self-interest as much as sexual desire. By the end, the debate about truth and fake news reaches a climax, as Evans lends his character’s half-baked ideas and odd moments of perception a welcome intensity.

But what about the good people? Ripley and Dora — played by Michele Austin and Shaniqua Okwok — arrive as a comic turn: south Londoners appalled at the realities of living in the English countryside. But they gradually turn into avenging angels, determined to expose Ted’s misogyny and terroristic plans. But despite their best efforts, the play text gives them too little to work with, and the impression they give of embattled virtue is muddied by the more colourful characters who surround them, from David Hargreaves’s Dominic and Owen McDonnell’s Pete to Peter Bray’s Anton and Edward Judge’s Perry. Both Isis (Liadán Dunlea) and Ruth (Amy Forrest) get lost in tempest.

It would be unfair not to acknowledge that there are some moments when Buffini’s writing takes off, as when Pete indulges in his fantastical imaginings, or when Ted and Anton explore the Roman past of Anglo-Saxon England, when black people walked upon the fabled green and pleasant valleys and fields, but there is also something very unfocused about the final effect of the play. It’s almost as if it is afraid to be fully serious and passionate about the issues it discusses and prefers to just touch on a nerve, as in the use of the P word, and then get distracted by another subplot. This gives the evening the feeling of a sitcom, a kind of welfare populism in which the audience is never surprised, startled or strained. It’s a piece whose gender and race politics should blaze; instead they barely smoulder.

So although the production, directed by Moira’s sister Fiona Buffini and designed by Lez Brotherston, has an entertainingly gothic feel, with the huge ancestral hall exuding the vapours of ghosts past and present, the dust of history and of decay, the action is never gripping enough and the central family too absent and too unattractive to hold our interest. As a comic satire it is only fitfully funny, and as a state-of-the-nation drama it never gives itself enough room to thoroughly explore the ideas it introduces. Despite some violent moments, and lots of noisy acting, Manor lacks the feeling that there is something vital at stake here, and its portrayal of ugly ideas is never seductive enough to be really dangerous. With its clichés and predictability, this is surely a missed opportunity.