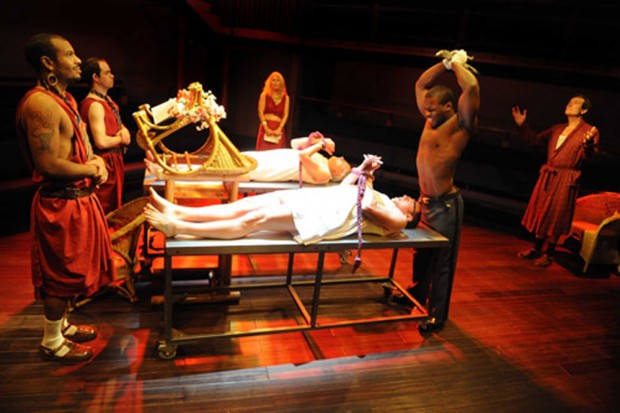 Reviving rarely performed plays is a high-risk strategy. On the one hand, there’s the chance of discovering a forgotten gem; on the other, there may be good reasons for the play being rarely performed. Nigel Dennis’s The Making of Moo was first staged at the Royal Court in 1957 with a cast that included Joan Plowright, John Osborne and George Devine, and provoked accusations of blasphemy. How has this satire on religion stood the test of time?

Well, you can’t accuse it of being irrelevant. Set in an African state, the play shows what happens when Frederick Compton, a British civil engineer, builds a much needed dam. But while he has brought water to the people, he has also inadvertently killed their River God, Ega. Frederick, along with his wife Elizabeth, cannot bring themselves to abandon the locals to a godless future. To compensate, they set about inventing a new god. The object of worship is named Moo (after the cows that stray into their colonial bungalow’s garden).

As usual, when the West tries to help the developing world, the results are, shall we say, mixed. If the genesis of Dennis’s play is the brainstorming session where the two Comptons think up a whole new mythology from scratch, its Old Testament phase comes two years later as Moo grips the local population and becomes an apocalyptic blood cult. As years pass, the worship of Moo becomes institutionalised, like some Californian cult, complete with a respectable façade, fund-raising visits and a falsified history.

All along the way, the path to crazy enlightenment is liberally strewn with hilarious incantations and glorious liturgical rubbish. Religion, Dennis is arguing, always manages to escape the control of reason, and the madder its ideas, the greater its success. In the end, as the Comptons’ son takes up the mantle of the prophet, the gloomy conclusion seems to be that religions love blood sacrifices, and thrive because enough people like to kill in the name of holiness.

In Sam Walters’s brisk and enjoyable in-the-round revival, the first London outing since its premiere, what comes across best is the play’s surreal humour. The jokes at least remain funny. But even Walters can’t hide Dennis’s failings as a playwright: too many ideas, not enough character. As a satire, The Making of Moo runs about 30 minutes too long, enough to make you want to chew on the cardboard the characters are made of. Fun turns into tedium.

Still, the performances are enjoyable enough, with Philip York convincingly showing Frederick Compton’s journey from colonial buffer to spiritual god-maker, and with Amanda Royle as his even zanier wife. There is also good support from Duncan Wisbey as another Brit who goes frantically native, and Ben Onwukwe as the local servant who is made Pope of Moo. If blasphemy no longer packs the punch it once did, and this play is unlikely to spark either demonstrations or fatwas, it remains an interesting and amusing curiosity, the latest in the Orange Tree Theatre’s commendably long line of revivals.