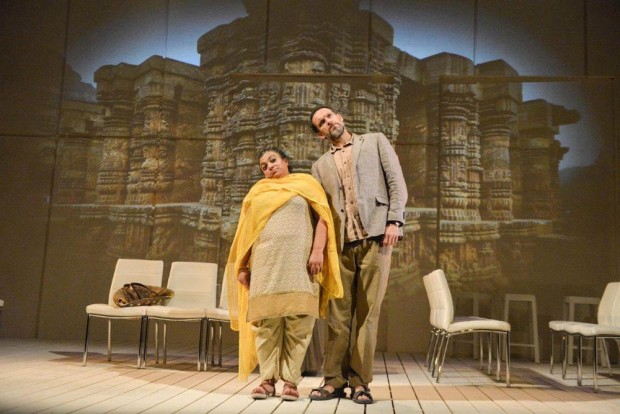 Writers can sometimes be inspired by plays that the rest of us have forgotten. I haven’t had a conscious thought about Marie Jones’s 1996 mega hit, Stones in Their Pockets, for years, but it has been a powerful example for playwright Tanika Gupta in creating Love N Stuff, a delightful two-hander which, like Jones’s play, shows off the skills and versatility of a pair of perfectly matched actors. Gupta takes two characters from her 2012 musical Wah! Wah! Girls, namely Bindi and Mansoor, and puts them into a beautifully fluid comedy about marriage, personal identity and family secrets.

Rina Fantani and Nicholas Khan (taking over from Tony Jayawardena, who created the role in the 2013 version of this play) perform a cast of many in this spirited and partially rewritten revival, which fills the main stage of this venue with laughs and a brief scattering of tears. The two characters that they play from Wah! Wah! Girls are the fiftysomething couple, with husband Mansoor being Muslim and wife Bindi being Hindu, who have been married for 35 years and living in Stratford, East London. Both are sharply characterised, with Mansoor’s shifty awkwardness growing into a renewed sense of self-confidence, while Bindi’s initial anger mellows into a tacit acceptance of some hard truths.

Set mainly in Heathrow Terminal 3, where Mansoor is waiting to return to India, only to find that his plane is repeatedly delayed, having left a brief note that tells Bindi that he’s “had enough of this country and am going home”. He’s fed up with “this cold island” and longs for the sunshine of Delhi. Is this cliché about weather a metaphor for emotional cold and warmth? We don’t find out until the end of the 90-minute piece, although it’s scarcely a spoiler to say that the answer is yes. In order to persuade him to stay, Bindi gets help from the couple’s lodgers: Farooq, a unmarried asylum-seeking athlete from Tajikistan, and Janice, an Olympian weightlifter from the north of England, as well as from 16-year-old Baggy, a neighbourhood white boy who talks like a black Briton from south London.

Written with a great satirical verve that parodies both Indian and British culture with humour and insight, Gupta’s play is a crowd-pleasing comic extravaganza in which the broader the caricature the bigger the audience response. Whenever Baggy arrives on stage, his character steals the show. Other members of this London panorama — which include a Football Dad, a shouty American woman, an airport perfume seller, a Posh Dad, a roasted peanut seller, a chai wallah, a Scottish policewoman and Ruby the hippie — come across vividly. And some of the jokes, especially the one about Allah and the airport, are nicely provocative. Yes, this is us alright, in all our glorious multiracial and multinational and multiethnic brilliance.

As well as being an enjoyable comedy, there is some depth here too. Flashbacks show significant moments in the relationship between Mansoor and Bindi, and in one short scene we see her phoning her parents in India. They decline to visit her in London until she has a child (although as a successful scientist she’s not that keen to be a mother), and there’s a pang of real regret in Fantani’s voice at this point. In a play about letting go of the past, there’s a strong sense that you can’t have everything, but that life can spring some big surprises sometimes. And, in a skillfully plotted twist, parenthood is probably the biggest surprise of them all. But if making a mistake is something we can all relate to, the play treats this with a light touch and a warm heart.

Needless to say, Fantani and Khan bring an enjoyable vigor and verve to their impersonations and their core characters. Directed and designed by Kerry Michael, artistic director of this venue and the man who commissioned the piece, and there is occasional music by Niraj Chag. I liked the way that the couple’s body language changed when they were newly weds visiting the Konarak sun temple in India, and their rapid switches between the huge variety of characters is a tour de force. An excellent evening of laughs and truth that is a hymn both to Stratford and to the very “stuff” of marriage.