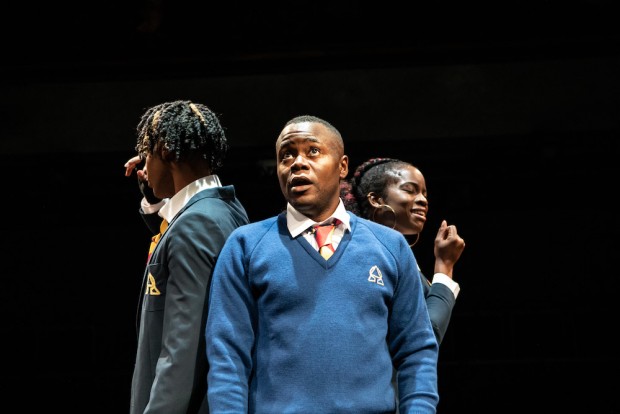 Wow. Just wow. The moment you enter the auditorium of this venue it’s immediately obvious that something special is going down. The stage is a grey circular platform which glitters a bit like the tarmac of a school playground on a sunny day, and three kids are already in action. One of them is conducting the drum ’n’ bass soundtrack, another is chatting to audience members, and the third is asking you for a crisp, or a sweet. Their school uniforms are lovingly distressed. The music is loud. Real loud. This is how Arinzé Kene’s superlative Little Baby Jesus welcomes you — and quite frankly it’s exhilarating.

The show, which was first staged at the Ovalhouse in 2011, is a coming-of-age story about three kids in their last year of secondary school. Kehinde is a 16-year-old black teen who likes mixed-race girls and whose parents come from Nigeria; Joanne is slightly younger, a mixed-race “rude gal” who comes from a troubled family; finally, Rugrat is the class clown, the type of boy who doesn’t take a lead but likes to be close to the cool kids, even if they are bad boys. Kehinde also has a twin, Taiwo: he reckons that he is older than her because although she was born first, it was he that sent her out into the world. It’s a typically quirky idea in a play that is full of them.

Using a mix of monologue, dialogue and even passages of choral togetherness, Kene tells a tangle of stories about his characters. In one, Joanne gets pregnant with Baker, who Rugrat reckons is the dumbest boy in his year. What she does with the baby, once she goes to a countryside retreat to get away from the stresses of home and inner-city life, gives the play its allusive title. She is joined at this institution by Kehinde, and their friendship blooms in a rare moment of utter heartbreaking tenderness. In another story, Taiwo, who is sporty and fast, races Pierre, one of the fearsome Cali Road Boys, a contest that has violent repercussions.

Among these main strands of narrative, Kene has included other stories, other scenes. One is a typically crazy after-school fight involving Babatunde, a muscular boy who was mocked for first turning up a school wearing sandals (another reference to Jesus). Then there’s a richly comic sequence in a local launderette, where Joanne works along with Kristina, a Lithuanian girl. More troubling is the anecdote in which Kehinde’s Grandma viciously attacks his older brother’s new girlfriend because she is a white girl. Race and gender are constants: the reason that white boy Pierre is antagonized by Taiwo’s racing skills is that she is both female and black.

Kene, whose one-man gig-theatre show Misty was a big hit last year, fires his verbal licks with enormous energy and brilliantly mixes laughter and sadness, embracing both the absurdities and the confusions of teen life with equal love. And it is love. The text has a vigorous life that would not be possible unless the playwright felt a real imaginative sympathy with his characters. For myself, I loved the imagery of magnetic attraction and sense of redemptive completeness. That said, some bits are easy to dislike: at times the storytelling is unfocused, with energy being preferred over clarity, and not everybody will admire the finger-wagging life lessons at the end of the piece. Sometimes the religious imagery, whether Christian (Adam and Eve) or Yoruba, feels forced.

But what does it for me, what really hits the button is the production. Director Tristan Fynn-Aiduenu, who won this year’s JMK award for young directors, creates a thumping, eye-popping event, part tall tale and part gig theatre, which is blissfully emotional and utterly enjoyable. He is well aided by Tara Usher’s slick design, which features a halo of light above the playing space which seems to nod slowly in response to the action. At times, especially in the fresh and hilarious opening sequences, there is a miraculous feeling of energetic wonder that radiates off the stage. As one actor tells a story the others act out its events, often in slow motion or using gestures to suggest some more ancient rituals or acts, as when the cawing of a crow is compared to the cock crow that heralds Peter’s betrayal of Christ.

And the acting is great. Anyebe Godwin lends Kehinde a calm and cool maturity that contrasts vividly with Khai Shaw, who plays the fool Rugrat as he tumbles across the stage, imparting a furious electricity to the action. Rachel Nwokoro matches the men perfectly, gesture for gesture and motor-mouth for motor-mouth; like them, she successfully conveys her character’s vulnerability as well as her anger. All of them embody the naïve wisdom of the street-smart teen, especially during the smaller moments of the play: the glimpse of a knife, some casual cruelty and the idea that growing up is achieved through experiencing random incidents. With its sensuous moves, pulsing energy and moments of rapture, this feels like the most exciting show on the London stage. Mindglowingly magnificent.