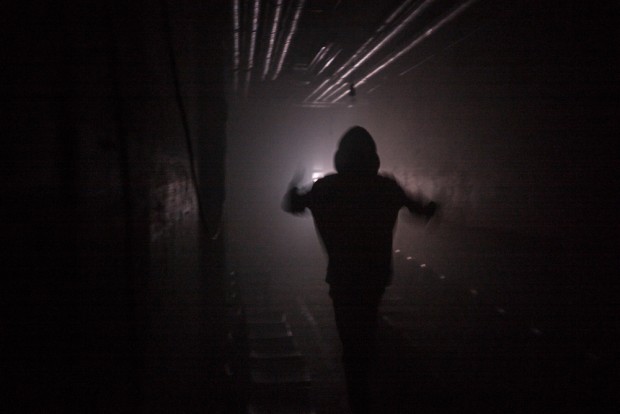 One of the reasons that Philip Ridley is the crown prince of imaginative playwriting is that he came at theatre from leftfield. In the 1980s, he didn’t go to drama school — he went to art college instead. This freed his mind from following established theatre conventions, and so anything was possible. At the time, he began as he meant to go on: as a polymath: he developed his visual art skills — drawing, painting and photography — and also wrote children’s books, film scripts and live art monologues. One of those early monologues, called Vesper, has been published in my book on Modern British Playwriting: The 1990s. Now, along with two others, it is being staged at Shoreditch Town Hall in a production directed by Jamie Lloyd, running alongside his superb version of The Pitchfork Disney.

Under the general title Killer, the three monologues explore extremities of feeling. The audience is led down into the dank basement of this venue, into a chilly room that immediately inspires a feeling of anxiety. We are seated on hard wooden chairs in a large square, facing distressed brickwork and conscious of the presence of our neighbours, breathing shallowly next to us. Behind us, actor John Macmillan instructs us to put on headphones, then crosses the room to switch out the lights. Total darkness. Pitch black. Religious chanting.

Immediately I feel my anxiety levels rise. In total darkness, you not only become more aware of your fellow spectators, but you also begin to dread accidents and fear injury. What would happen if something fell on you, or someone hit you? If you feel ill, how would the ushers know? Are we being watched with infra-red goggles? Paranoia sets in. The first monologue, appropriately enough called Killer, is enough to chill the blood even more. It’s a story about a young man who discovers the secret of the killer instinct — a kind of parody of the entrepreneurial spirit — by seeking inspiration from Ronnie, the leader of a neo-fascist gang called Sieg Sieg Saxon.

In the blackness, appropriate enough for this brief dark tale, Macmillan’s voice caresses first one ear and then the other. The effect of binaural sound means that he seems to be jumping around the room behind you, then creeping up real close so that you can almost feel his breath on the back of your neck. You turn, but you can’t see anything. Your body tenses up. One minute he’s whispering; another he’s roaring. He kicks something right across the room. Then he’s creeping up on you again. On your left; on your right. Then it’s time for his character to take part in a bizarre inauguration ritual involving a white rabbit — be prepared for something that’s pretty stomach churning.

Now the lights have come on again and we are led into a nearby corridor, this time sitting along the walls and opposite each other. Haze effects. Light bulbs. Light flares. The second monologue, entitled Sledgehammers, casts Macmillan as a slightly posh anally-retentive boy who is a carer for Mrs Tandy, an elderly widow, and whose daily routine is turned into a nightmare with the explosion of a zombie-style uprising of maniacs with sledgehammers. It’s a deftly written, half comic, half horrifying vision of just how precarious our everyday life can be. How near to the edge we might live.

For the last monologue, Vesper, we troop into a claustrophobic room, hung with large light bulbs, and we stand for the duration in half-darkness. This story, which features a man on the run and an albino ostrich called Vesper, is also humorous and full of asides not only about current food fads, but also about our desire to believe in miracles. As the lights come up and go down, and as various effects stream through the room, Macmillan’s voice rushes through the comic-book story with enormous vigor and an enchanting intensity. Bam, bam, bam.

As directed by Lloyd, and designed in a genuinely spooky way by Soutra Gilmour, the three monologues are a real experiential treat. As always, Ridley’s writing is a masterclass in narrative brio. He mixes serious social issues with juvenile imaginings, gross examples of splatter-fest horror with moments of poetic brilliance, and offbeat giggles with heightened anxiety. Here he fields a variety of voices that are entertaining and menacing in equal measure. When I saw (or should that be experienced?) the show, someone fainted and had to be carried out.

But while Killer is a descent into the dungeon of the human condition that has the power to fill you with vivid images of fear, of humour and of the thrill of danger, some of the show feels too much like a radio play, or a re-run of experimental dark-theatre aesthetics. Although Macmillan is impressive throughout, I feel that Lloyd could perhaps have done more with lights, and other effects, to enhance the words. More could also have been done with Ben and Max Ringham’s sound composition. But if at times the experience felt a bit scrappy and sketchy, it was also 90 minutes of an exhausting heater-skelter ride through some of our deepest fears: fear of violence, fear of deformity, fear of persecution; fear of loss of control. It’s a relief to survive it; a pleasure to enjoy it.