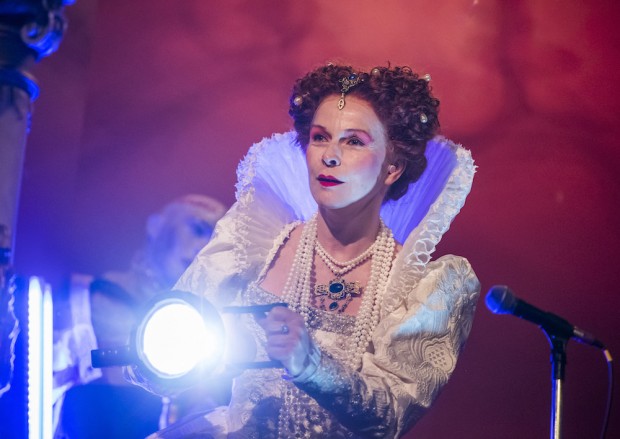 The late Derek Jarman’s 1978 film Jubilee is a punk classic. I think he was in his Fellini phase, his vision peopled by freaks, dwarfs and cracked actors. And punks of every description. Plus a few New Romantics. And a touch of Andy Warhol (as in film-maker). The film is theatrical, situationist, punky, camp, awkward, word-choked and often as slow as a drop of sweat dribbling down your back on a hot day — basically a mess, but great if you see it as a late nighter. And stoned. If not, a touch embarrassing. Cringe-making. You just need to pick out the good bits like raisins from a panettone: the ketchup fight with the waitress; Amyl Nitrate singing, gyrating and goosestepping her way through “Rule Britannia”; the Plastic Surgery thrash, etc.

The film’s vision of a London of bomb sites, burning prams and prancing ballerinas, of boredom and fire-starters, of nudes and “Anarchy in the UK”, of Lindsay Kemp bleeding into Adam Ant, and lousy improvised dialogue, is so much of its time that it puzzles me that anyone would want to make an 40th anniversary version, and a stage version at that. So I was sceptical to begin with and Chris Goode’s adaptation, a co-production with the Manchester Royal Exchange Theatre, does not disappoint — it is simply appalling. What he’s done is to take Jarman’s screenplay, which is an odd mix of inflated poetry and often pretty feeble chat, and then add extra equally feeble dialogues devised by the company. The result is a horrible mess, which, by the way, is a quality that Goode exults in, proudly boasting about it in his programme note.

The jubilee of the title is the Queen’s silver jubilee in 1977, and begins with the first Elizabeth and her astronomer John Dee and Ariel (on loan from The Tempest) time-traveling from Renaissance times to the present. She moves through a post-apocalyptic London, watching the antics of a group of nihilists with punky names like Amyl Nitrate, Chaos, Crabs and Mad, who live in a bohemian squat. There’s some stuff about a music biz impresario called Borgia, a wannabe called Kid, before the plot swings into random police shootings and revenge killings of cops in the name of justice, and of anarchy. Our rebels then retire to Dorset, while the Virgin Queen returns to the 16th century.

Goode’s version is longer, more slack and even more inept than the original. For example, Nitrate’s “Rule Britannia” is rude, crude, but well-controlled and well-performed. It has a kind of naive integrity. Goode uses the same sequence, but it is messy, off-hand, poorly danced and clichéd. And the same is true of the whole show — there’s nothing wrong with reimagining a classic, but you do have to have some imagination. Goode doesn’t. Okay, there were a handful of bearable moments, like little cups of water in a desert of aridity: I liked the Kid’s rap, the “Jerusalem” sequence and, at a pinch, the cast’s version of the Toyah Willcox anthem “I Want To Be Free”.

It would be ridiculously easy to list all of the most moronic moments of the show, except that it would be even more boring to read than to compile. In his programme note, which is mainly drivel, Goode argues that “mess and rudeness are the most dependably joyous ways we’ve yet invented of demolishing the barricades that capitalism, patriarchy and deadly heterosexual/cis-normativity use to divide and conquer us.” Oh do fuck off. I mean, there’s really nothing joyous about this show. And do we need your lectures? And its spirit of nihilism seems to me to be grossly misplaced. In 1977, there was some excuse for the nihilistic spirit of the original — it was an extension of a social movement. Today, it’s just posturing.

Goode’s additions to the screenplay are embarrassing in their predictably, and lack of imagination: his targets include Jacob Rees-Mogg, Julian Fellowes and Eddie Redmayne. Then Trump and Grenfell Tower. Talk about easy, lazy satire. Goode gives Nitrate, England’s glory, several speeches about the current state of the world: these are examples of some of the worst writing I have ever heard in the theatre — hectoring, pretentious and obvious. I mean, who are you to wag your little finger at us? Fuck right off! Nitrate is played by transgender performer Travis Alabanza, who introduces the second act by sneering at the straights and old people in the audience. Not very nice. And surely not a very good advert for a more tolerant society.

Still, seeing the show did have its compensations. It’s not every day that, in the interval, such a diverse crowd of people come together to agree on what a load of old bollocks we have just seen. And the most lucid of them left at half time. And let’s be clear: no one left because they were offended or provoked — they left because the show is crap. For a while now, I have suspected that Goode is grotesquely over-rated — I suppose that I should be grateful for the confirmation. His success seems to me to be due to his ideological radicalism, and not to his theatrical skill. He says all the most progressive things; pity about his stagings.

The Lyric Hammersmith has been decked out with a cross between punk chic and modern neon by designer Chloe Lamford while Goode directs an enthusiastic, if not very skilful cast: Toyah Willcox, who played Mad in the film returns as Elizabeth, plus Lucy Ellinson, Yandass Ndlovu, Sophie Stone, Rose Wardlaw and Temi Wilkey. But sadly neither music nor dance moves are good enough to excite — and the best that can be said about Goode’s Jubilee is that it must surely be in the running for the hotly contested accolade of the worst show of the whole decade.