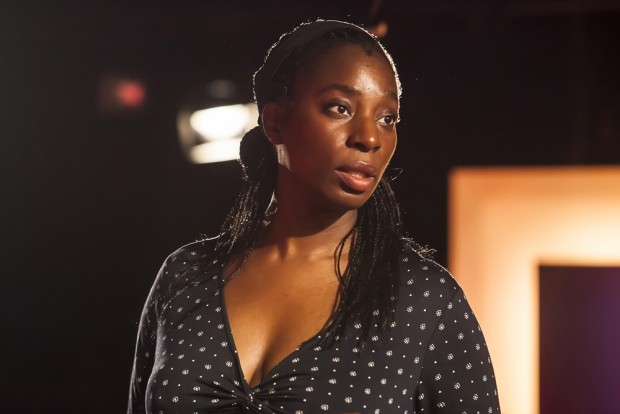 On my way to see this show, I had to walk across Soho in central London. No fewer than five people asked me for money; one was a real hassle. Yes, I know the government says that the economy is booming, but the record number of homeless in the capital tells a very different story. Yes, I bumped into five of them in 15 minutes, although I know there are thousands more. And maybe one of them is, like this play, called Joanne.

As these five short monologues, each of which is written by a different writer, illustrate, Joanne is a very troubled young woman. She is a self-harmer, and has just been released from prison. Outside she is met by a social worker, who tries her best to organise some money for her, a place to stay, a doctor to repeat her prescription, and then organise her next appointment with the probation service. This is recounted by Stella — in the first monologue by Chino Odimba — a social worker whose short-term contract has expired, and who is at her own leaving party. She’s a bit drunk, a bit annoying, but her heart is in the right place. She’s worried about Joanne.

And she’s right to be. Living in a hostel isn’t working for Joanne; she’s being bullied; someone has taken her red Mickey Mouse watch; she’s freaking out. Enter Grace — written by Ursula Rani Sarma — a cop who bends the rules to give Joanne a second chance. But leaving the pill-popping young woman alone ends up with her visiting A&E, where the overworked receptionist Kathleen — by Deborah Bruce — asks her to take a seat and wait.

By the time we get to the fourth monologue — Alice by Theresa Ikoko — delivered by a service and operations manager at the hostel, the pattern of this hour-long show is clear. We find out lots about the various people who have met, or dealt with, Joanne, but we will never meet the woman herself. Her absence defines the evening. By the end — in Becky by Laura Lomas — we find out from her teacher that Joanne has had a long history of problems, and the final scene of the story is depressingly sad. Although the story is a politically timely criticism of cost-cutting in the social services, the end result seems inevitable from the start. I would have preferred a different selection of characters: the judge that sent her away, the prison governor, her probation officer. People with power who have affected the outcome.

All five monologues are performed by Tanya Moodie and each character is distinct, yet at the same time also very similar. Each is well-meaning, humane and over-stretched. These are the good people who are usually ignored. Moodie brilliantly brings out their individuality, but can’t quite overcome the similarity of their social roles. Still, this is one of the most generous, expressive, focused, compassionate and compelling performances you’re ever likely to see. Moodie radiates a warmth that adds an appealing humour to her narratives, encouraging our empathy.

The main problem with Joanne is that its form gradually begins to feel contrived and that although each of these playwrights has a distinct accent, the repetitive and predictable sameness of their fragmentary stories — a bit of background, a wry account of work, a slice of poetry, a quick nod to the absent Joanne — feels a bit too artificial to really hold the powerful emotions of the situation, which is all about a kind of contemporary version of the absent victim Eva Smith from JB Priestley’s An Inspector Calls.

Whatever the play’s shortcomings, this production by Clean Break’s Róisín McBrinn uses the studio stage space well, and the stark design by Lucy Osborne, with neon lighting that gives a different sickly glow to each scene, is perfect for the story. But despite some glancing insights, and moments of grim humour, the absence of Joanne herself finally feels a bit frustrating. But perhaps I’m being ungenerous. After all, by the time I’d arrived to see this show, I’d already refused five outstretched hands.