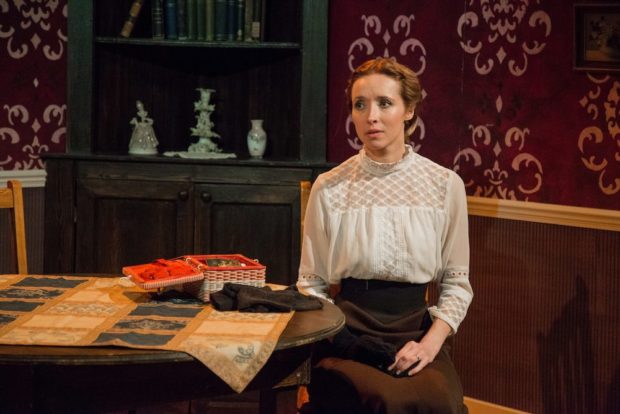 Edwardian dramatist St John Ervine was once, along with Arthur Wing Pinero, Henry Arthur Jones, Harley Granville Barker and George Bernard Shaw, hailed as a British Ibsen. They wrote problem plays that explored the social injustices of the early 20th-century, including the so-called Woman Question. Although Ervine is less well known than GBS, some of his work is just as interesting, and once again this fringe venue, led by its artistic director Neil McPherson, has played an important part by reviving Jane Clegg, a forgotten play by Ervine, in April 2019. Although once a rep standard, this production was the first London revival for 75 years.

Originally staged in 1913 in Manchester by Annie Horniman’s Gaiety Theatre, with Sybil Thorndike in the title role, the play is a serious study of the role of women in the age of the suffragettes. Jane has been married to Henry Clegg, a feckless traveling salesman with a gambling habit and an eye on fancy women, for some 12 years. While he is out at work, she looks after their two children, as well as his mother. Stuck at home with Henry’s mother, who defends her son whenever there is any dispute, Jane sees the imbalance in their relationship — “I give him everything and he isn’t faithful” — and that her husband is weak-willed and irresponsible, “an absolute rotter”. Despite this, he behaves as if he is the boss of the household and wants to have control over his wife’s money, especially her recent inheritance of £700.

Although Jane comes from a wealthy background, she can only achieve real independence by standing up to her husband, exposing his lies and getting rid of him. When Morrison, Henry’s cashier from work, calls around asking after a missing cheque, followed soon after by Munce, a local bookie, her husband’s double-dealing is revealed and Jane is presented with an ethical dilemma. Should she use her inheritance to bail him out when he’s threatened with jail, or should she keep the money to help their children with their education? The play is Ibsenite not only in the clarity of its moral conflict, but also in its form as a well-made three-act play, complete with significant letter, here played straight through without an interval for some 90 minutes.

The drama was written at a time when women were fighting for the right to vote, a movement that Ervine supported. Apparently, he was standing near to suffragette Emily Davison when she threw herself in protest under the king’s horse at the 1913 Epsom Derby, an act of direct action that cost her her life. The play’s feminism is articulated by means of the conflict between Henry’s mother, who believes that you have to spy on men to control them, and Jane’s more modern idea that trust and loyalty are what binds couples together. By the end of the play, both women are confronted with the truth of Henry’s behaviour, but only the younger one learns from this. Unlike Ibsen’s A Doll’s House, Jane doesn’t leave — the slammed door at the end of the story has a different meaning.

Ervine eloquently paints Jane’s portrait, showing us a sincere woman who is both a harassed but loving mother and an increasingly disillusioned wife. Her daily routine — “cook and wash and nurse” — is archetypal, and her moral strength visibly grows. When she takes control you feel like cheering. At the same time, the playwright, more disturbingly, suggests that her very young daughter is already a bit flirty, and that the fact that Henry was bought up in Ireland has made him not only morally freer, but also a bit of a charmer, a shade of English stereotyping perhaps. Ervine put a premium on audience recognition of his characters: he wrote, “A playwright will succeed in his design only when he has enabled each member of his audience to say, ‘That might be me!’ or ‘I know that man — he lives next door to us!’”

David Gilmore’s production is naturalistic enough to make the characters instantly familiar, and we can easily feel with Jane, get exasperated with Henry’s mother, and find Henry ethically repellant and cowardly. Alex Marker’s set suggests the comfortable trap of Edwardian respectability, and the acting is very good. Alix Dunmore plays Jane as a caring human being who slowly realizes that her well-suppressed suspicions are actually right, while Brian Martin’s Henry can be both sociable and exciting, but also manipulative and wheedling. They are well supported by Maeve Alexander as his mother, loudly defensive of her son, Matthew Sim’s Cockney Munce and Sidney Livingstone’s upright Morrison. Although the play is crudely filmed by Adam Jones-Lloyd from this fringe venue’s back row, its mixture of full-stage and close-up tells the story effectively. If not exactly an unforgettable gem, this is a play that certainly repays interest.