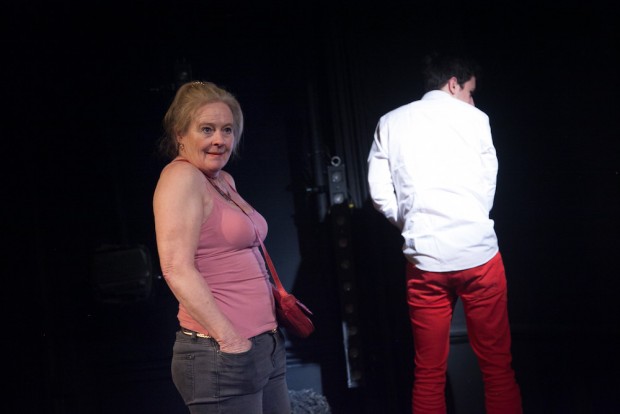 It’s the 150th anniversary of the opening of the Finborough Arms pub, so Neil McPherson, artistic director of its upstairs theatre, is in a celebratory mood. He’s promoting an appetizing menu of new writing, classic revivals and other events. An early success is Sue Healy’s Imaginationship, a highly entertaining and freshly written play which explores the idea of a divided nation by setting the story in Great Yarmouth, a place which voted for Brexit with a 72 per cent majority in 2016. With its falling wage levels, low percentage of university graduates and high proportion of working-class residents, the town symbolizes all the left-behind areas that simmer in resentment at metropolitan privilege and nurse their dissatisfactions.

Set in the summer of 2016, the play is a character study which shows Ginnie Atkins — a 59-year-old Yarmouth woman — hosting a 1976 revival disco at a local ballroom, looking back not in anger, but with a rose-tinted glitter ball, full of memories. She has some mouthy things to say about London, and they are sentiments rarely heard on British stages. Her best friend is Brenda, and Ginnie — who has just been dumped by her Detective Inspector girlfriend — would like to revisit their brief fling, when they shared a bed in the hot summer of 1976. But Brenda has other things on her mind. Well, mainly one thing: cocks. For her, the 40th anniversary bash is just another chance to pull. At the same time, she wants to discourage her 39-year-old daughter Melody from getting too obsessed with Tony, a 59-year-old evening-class teacher.

Into this situation of female bonds comes Attila, a twentysomething Hungarian factory worker who is an excellent and elegant dancer — and has a permanent hard-on. Brenda sets her sights on this young man for a quick shag, and encourages Melody to do the same — especially when she discovers that her daughter’s relationship with Tony is wholly platonic. Aptly enough, he is a classics expert, who writes about ancient Greeks and Eros, some of which goes well over the heads of Melody, not to mention Brenda. In fact, a running theme is the contrast between the well-educated southerners (Tony comes from Kent) and the under-educated Norfolk folk. Attila, unsurprisingly, has a menial job, but has had a great education.

In this corner of Britain, the 1970s was a time of exuberant sexual freedom, and Brenda has not really grown up. She is still a teen at heart, while her mate Ginnie — who can certainly strut her stuff — is planning her retirement and buying a bungalow. And it’s great to see older women’s feelings described so sympathetically. By contrast with these pleasure-loving hedonists (with their vodka, wine and, well, anything that gets you high), today’s youth are seen as more sensible and less wild. Melody is very repressed, rather fragile, while Attila is clear-headed and charming. Two other youngsters, local boy Baz and the Lithuanian Gediminas, represent another typical contrast: the Englishman is compulsively jokey while the Eastern European migrant is well-educated and serious.

First seen as a staged reading at the Finborough’s Vibrant new writing festival last year, Healy’s play has a very strong thematic core, convincingly showing how a nostalgia for the past skews perceptions of the present, and how illusions about “making Yarmouth great again” mirror the delusions of the Brexit campaign. And it’s right to hear these dissonant voices on a London stage. At the same time, the play shows a series of one-sided relationships: Ginnie and Brenda; Brenda and Melody; Melody and Tony; Attila and Melody. Healy is this venue’s literary manager and her writing is lively and perceptive; plus there are plenty of good laughs.

But while the characters — with their painfully one-sided relationships — are convincing and abundantly alive, the play does have some problems. Its main fault, to my mind, is its over-dramatic ending, which requires the introduction of a case of historic sexual abuse (of a boy by a young woman) which feels contrived and unnecessary. It’s a theme that Healy tackles with her typically wry intelligence, but it doesn’t really belong here. In fact, it deserves a play of its own. Removing the over-dramatic ending from the story would restore the piece to its true identity, which is that of a deeply meditative study of one-sided relationships and personal illusions. The imaginationship of the title — a phrase that Brenda uses to describe her daughter’s fantasy of love with Tony (imagination plus relationship) — is all about a failure of connection. One-sided relationships both express, and at the same time thwart, the desire to come together, to make a human connection. It is this theme, which also resonates with the wider situation of Brexit, that runs through the play, stinging like the salty tase of the sea, vinegar-soaked chips and stale beer.

Tricia Thorns’s production for Two’s Company is designed by Leigh Malone and Isabella van Braeckel, and is very enjoyable, with Patience Tomlinson and Jilly Bond especially impressive as Brenda and Ginnie. Joanna Bending (Melody) and Bart Suavek (priapic Attila) are also very good, while the disco scenes pulse with 1970s sounds. This is both an acutely drawn family drama and a sharply outlined picture of Brexit Britain.