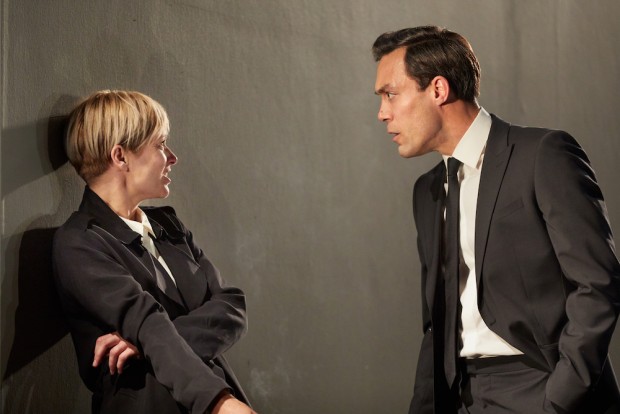 Whatever you might think about Brexit, the dreaded B word, the current climate certainly seems to be reinvigorating both feminist playwrights and political playwrights. So welcome back David Hare, the go-to dramatist for any artistic director wanting to stage a contemporary state-of-the-nation play. His latest, with the rather downbeat title of I’m Not Running, opened tonight at the National Theatre, but it may be a disappointment to anyone looking for answers to burning current questions because it is more concerned with an imaginary female contender for the Labour leadership than with Brexit, the anti-Semitism row, austerity or the country’s future. It’s a play about the Labour Party which never once mentions Jeremy Corbyn or Momentum — and that takes some doing.

We have been here before. Hare excels in writing political dramas that fictionalize facts and turn them into archetypal situations: his 1993 classic The Absence of War, for example, is about the Labour Party before it was taken in hand by Tony Blair, but its version of the leader is only tangentially based on Neil Kinnock. Then in Gethsemane (2008) he wrote a drama about political ambition that was deliberately not concerned with Gordon Brown. Similarly, his latest is again about Labour, but it’s a fantasy, an alternative reality if you like, which bears little relationship to that lefty institution’s current role, and current conflicts. Instead, we find ourselves in Hare world, a place where fact and fiction blend into “faction”. And where it feels more like 2008 than 2018.

Typically, the playwright focuses on a female character, Pauline Gibson, played by Siân Brooke, and the story offers a rich study in female psychology, and the role of women in two of our defining national institutions: the NHS and Labour. (Of course, some women might disagree about the realism of his depiction.) Pauline is first shown as a medical student in Newcastle in 1997, the year of the Blair landslide, but although she’s dating Jack Gould, a young law student and Labour activist modelled slightly on the Milibands (having also a brilliant socialist theorist for a father), she is more concerned with her dying alcoholic mother than with joining any cause. Things change when she starts working as a junior doctor in Corby hospital, especially when one of her patients, Sandy Mynott (another politico), tells her that the hospital faces closure because of a plan to make the NHS more efficient.

The story, which is told in flashbacks as well as moving forwards, sees Pauline teaming up with Sandy to run a campaign to save the hospital. By leading this venture, she comes into conflict with Jack, who is a rising Labour star, but whose views on the NHS are more technocratic (things need to be more efficient) than democratic. When she argues passionately in favor of the right of Corby citizens to have access to their own local hospital, he points out that they would get better medical results if it was closed and they went to bigger, more specialist, institutions in adjacent towns. Galvanized by this experience, Pauline decides to run for parliament as an independent, but how long will she resist the lure of joining Labour?

The trouble with Hare world is that it is not only a place where people feel that it is necessary to explain everything at great length (the play lasts two hours and 40 minutes), but it is also a paradoxical situation in which the main female character is sincere but a bit monotonous, while the main male character is a bastard but charismatic with it. So sprinting Jack gets some of the best lines, despite the fact that Pauline is on stage for the whole marathon. Although it’s nice to see Pauline getting the better of Jack, and the men being uncontrollably emotional for a change, it takes a long time for the main theme of the play to emerge: the search for a woman to lead Labour.

In Hare world politicians don’t have mobile phones, or tablets, or social media followers, but they exist in a puzzling vacuum where only a small cast of intimates appears. That said, there is a strong emotional charge to the central relationship of Pauline and Jack, which might remind some spectators of Hare’s Skylight (1995) or even Amy’s View (1997). What’s new this time is how explicitly the playwright relates the political not only to the personal, but to the sexual as well. The most intimate moments of Pauline and Jack’s on-and-off relationship (more off than on) are shown to be highly charged with power games, with hate as well as love. These scenes, along with a brilliantly written climactic confrontation in a garden, are the best in the play.

What about the content of the story? With a title that puns on the idea of running for election and running away from your past, especially your family past, the drama shows how Pauline’s self-confidence and self-knowledge is almost compromised by her brutal experiences of home life. Her father was an abusive bully, her teacher mother had addiction issues. But while the story illustrates how she overcomes these problems, and how she stays focused on a single-issue campaign — save one NHS hospital — the other political problems in the play are oddly perfunctory. In one scene, FGM comes up, then disappears; in another, the idea of how party candidates are selected is mentioned, then disappears. With all these disappearing issues, you have to ask: is the play crammed too full?

Part of the problem is that Hare’s chosen Neverland of “faction” rather than documentary simply doesn’t give enough space for these ideas to breathe. So, like sudden lightning strikes, there are only moments, usually single lines, of illumination: the fragility of life; the inexplicable rules of attraction; the desire to make a difference; the severity of party machines; PR as an optimistic art; politics as a mode of self-improvement; the link between anger and sexuality. And, above all, the necessity of supporting progressive women’s voices. And although we can all agree with this, it could be pointed out that, at this flagship venue, men easily outnumber women in having their work staged, and, if that was not bad enough, men are now getting productions of their plays about women’s lives.

Directed by Neil Armfield on Ralph Myers’s simple set, the action is padded out with Jon Driscoll’s projected video interviews and a slightly satirical news conference. Brooke does a good job of staying the distance with her character, although at times I felt that her range was rather narrow, especially when compared to Alex Hassell’s Jack, who gives the performance of a lifetime, sometimes confident, often anguished, frequently mansplaining and occasionally hysterical. By contrast, Joshua McGuire’s truth-telling Sandy offers an oasis of calm. Amaka Okafor plays a student well, and Liza Sadovy is Pauline’s troubled mother. But while the play has lots to say about women in public life, and some good jokes about male self-esteem, it really says nothing about Labour’s current malaise. And that’s a bit puzzling, isn’t it?