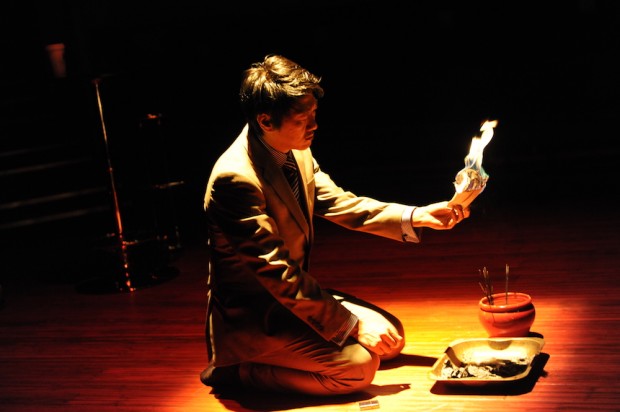 Oddly enough, given the rise and rise of China during the past two decades, there have been precious few British plays about this country. While young playwrights happily trot around the world on their gap years, or for their holidays, their imaginative horizons remain lamentably narrow. Yet China matters. So it’s good to be able to welcome Tim Luscombe’s new play, Hungry Ghosts, which is set in Shanghai.

Here, two worlds collide. Chinese lawyer Pin-de is trying to save her sister, who has been condemned to death by the government for her political activities. But to do this, she has to ask help from her brother, Zhi-hui, who is a party member, top journalist and property developer. The trouble is: they haven’t spoken since they quarreled during the Cultural Revolution. Into this conflict, unwittingly steps British Grand Prix driver Tyler, who is in Shanghai for the big race. Zhi-hui wants to interview him. They are well matched: both are corporation men, happy to help with business. Both men serve their regimes; both suffer a crisis because of it. Both are guilty about their fathers. But when Tyler meets Pin-de, he begins to grasp the reality of life in Communist China: yet can he use his celebrity status to help her?

Although there is a programme note about the Charter 08 manifesto — which calls for liberal reforms and which was signed by some 350 intellectuals and human rights activists in December 2008 — the play is actually about how Pin-de is fighting the system by exploiting its legal loopholes. It is not about dissidents, but about reformers who try to embarrass the state. The conflict between those who want change, who are brave but fragile, and party members who simply conform, is made more complex because Pin-de can be rather off-puttingly hectoring and Zhi-hui is no more corruptible than any other individual. He is also a more interesting character than his sister.

Additional complications, such as the arrival of Tyler’s boss, Baz — who has just purchased a historical Buddha for a cool £2 million — and the machinations of Liv, PR for Tyler’s team, mean that we get to view a substantial array of human behaviour. There are also some tense moments as we watch the likable Tyler about to throw away his career, while only able to be of limited political help to Pin-de. Best of all, Zhi-Hui and Pin-de are particularly scornful when dealing with “foreign devils” such as Tyler, who at first understands nothing of either the problems or the subtlety of the Chinese mindset.

Nor does Luscombe compromise by over-simplifying the situation: this is a dense play which explores the lust to succeed of the racing driver as much as the desire for justice of the reformer. As directed by Luscombe, the play is not without its problems. The play has too many issues, such as the state’s one-child policy and internet censorship, which can be a bit distracting. And the acting does not quite succeed in finding the right tone for exchanges between the Chinese characters, who have to speak a fluent English that mimics their fluent Mandarin, and then a foreign English when they speak to Tyler.

But at their best the cast — led by Andres Williams as Tyler, Lucy Sheen as Pin-de and Benedict Wong as Zhi-hui — combine to create an atmospheric evening which is both a political lesson, with a gruelling account of atrocities committed during the Cultural Revolution, and a family drama. Opening in the same week that David Cameron visited China, Hungry Ghosts is sometimes uncomfortable to watch, but it is certainly topical.