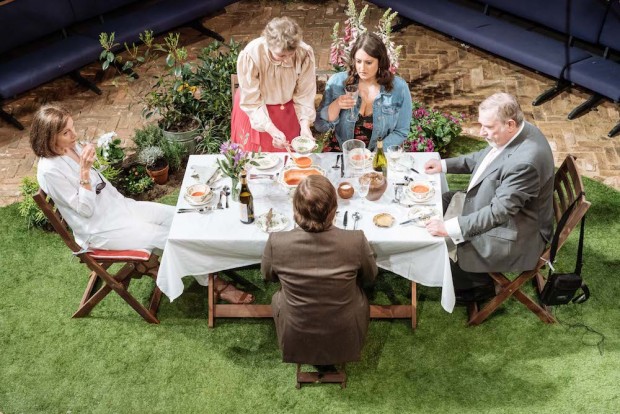 Good programming is an art, and Paul Miller — artistic director at this venue — is clearly on a continuous roll with his inspired mixing of the old and the new, forgotten classics and new voices, revivals and premieres. And he loves to take risks. With this revival of Charlotte Jones’s Humble Boy he breaks one of the unwritten rules of programming: never revive a play first put on by a major theatre until at least 30 years have passed. Humble Boy was a massive hit when first staged by the National Theatre in 2001. Then, for a decade, it was often revived in theatres outside London, but this is the first restaging in the metropolis. Although Miller can’t get the original’s dazzling cast — headed by Diana Rigg and Simon Russell Beale — he can, and does, present this enjoyable play with commendable freshness and vigour.

Set in a pretty country garden, this tragi-comedy explores the conflict between generations in a nice middle-class family. Felix is a 35-year-old Cambridge University astrophysicist who is visiting his mother, Flora, after the death of his father. While he struggles to reconcile himself to the loss, and his depressed and suicidal feelings, his mother is thinking of marrying George, a neighbourly vulgarian whose daughter Rosie was once Felix’s girlfriend. Comic relief comes in the shape of Mercy, Flora’s scatty friend, who in a celebrated luncheon scene adds a spoonful of the dead father’s ashes to the gazpacho. Only Jim the gardener seems to really understand Felix.

Written with a zesty confidence, Humble Boy is a metaphor-rich family drama that throws handfuls of allusions into the flowerbeds, and then watches them blossom into references to the mother-son relationship at the centre of Hamlet (Felix is shocked by evidence of Flora’s sexual desires, and prevaricates about committing suicide). Buzz, buzz! As well as using astrophysics metaphors about black holes and string theory, the fact that Felix’s father was a bee keeper means that there are jokes about Flora being the Queen Bee and other symbolic mentions of entomology. Buzz, buzz! It is also a play about Englishness, about emotional reticence and about how the desire to be an exceptional individual (Felix is a brainbox) can clash with the challenges of ordinary family life.

But despite Felix’s suicidal thoughts, this is also a story about emotional healing. Although its picture of Middle England is one in which men typically resent being dominated by strong women, there are plenty of moments when this is softened by the balm of laughter. If sons struggle to accept the infidelity of their mothers, a possibility of reconciliation does exist, and the whole eccentricity of the piece’s ideas, metaphors and language carries with it a quiet joy. When we find out that there is a child called Felicity, and bearing in mind the meaning of Felix’s name, things begin to look up — hope and happiness are possible.

Jones’s writing is not only delightfully quirky, it is also generous in spirit and bursting with cleverness. Miller’s highly enjoyable production, whose designer Simon Daw produces a garden full of fragrant blooms, is full of pleasurable moments, such as George’s in-the-round pissing and Mercy’s bravura saying of grace, which provoked applause on the press night. The witty references to Shakespeare, to Newton and to Marie Curie sit comfortably with the evocation of Second World War bomber pilots and Middle England conventions. Yes, this is us alright. In our middle-class country guise.

Jonathan Broadbent plays Felix as a battered teddy bear of a man, with the convincing roughness of the depressed and lonely, while Belinda Lang as his mother Flora can drip acidic comments convincingly, even if she lacks the majesty and steel of Diana Rigg. Paul Bradley has a rugged charm as George while Selina Cadell’s Mercy calls up a veritable litany of squeaks, squawks and hilarously gormless twitches. Rebekah Hinds’s Rosie is all heart and Christopher Ravenscroft is reliably sincere as Jim the gardener. Characterized by black humour, loopy writing and good acting, this show combines laugh-out-loud delights with a quietly moving ending.