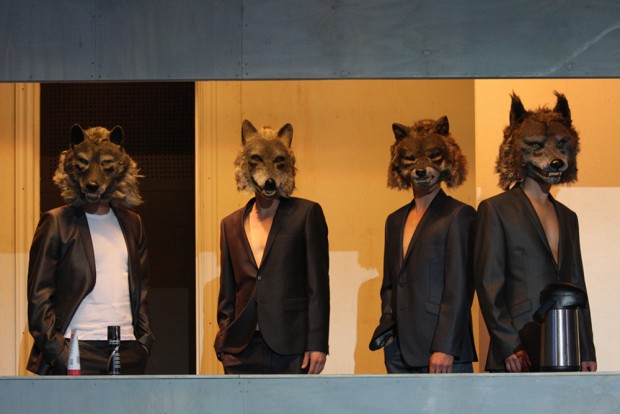 Simon Stephens is not only one of our most talented playwrights, he’s also the one most open to influences from German theatre. In 2007, he collaborated with director Sebastian Nübling on the world premiere in Hanover of his innovative play, Pornography, which took more than a year to be staged in the UK, in what was eventually a compelling version by Sean Holmes. Holmes is now head of the Lyric Hammersmith, which hosts Stephens’s latest collaboration with Nübling.

Three Kingdoms is a dark thriller about sex trafficking. It begins with two British detectives, the botany-loving Ignatius and the German-speaking Charlie. When a gruesomely severed woman’s head is found in the Thames, the duo begin to trace the victim, who turns out to be a prostitute trafficked from the Continent. They travel to Germany to seek the killer, whose DNA has been found in the semen in her hair, and get help from local cop Dresner. Together the trio head East.

For me, the most successful scenes were those heaviest in visual metaphor. Whores appear dressed in furs and with deer heads; sinister males appear in wolf masks. This symbolism suggests the animal nature of desire, and hints also at its irrationality. It’s very David Lynch, very magical. At another moment, a woman emerges from a suitcase, a sharp and simple metaphor for trafficking. Quite near the end, criminals wearing boxing gloves pummel the walls of Ene-Liis Semper’s set, which looks like a distressed warehouse, one of whose walls is covered in bloody handprints. Yet, amid all the extravagance of Nubling’s production, you can sometimes even get a glimpse of Stephens’s text. In one of the many jokes of the evening, Ignatius can’t speak a word of German, giving a strong sense of being at sea in a culture clash between the Brits and the Germans.

Likewise, Stephens’s text is often hidden amid the babble of German and Estonian words (this is a co-production with the Munich Kammerspiele and Estonia’s Teater NO99), and it is hard to see through the mists of the Germanic acting (lots of nudity) and Germanic exaggerated soulfulness (I almost said angst). When you can hear it, Stephens’s text is punchy and direct, full of pent-up emotion and vivid imagery. Typically, the dialogue is energetic and the longer speeches full of excruciating and savage imagery, plus there’s his love of pop music. And he also articulates a real disgust at the smell of porn.

There is no denying the power of some scenes, but equally no denying the self-indulgence and spirit-sapping quality of many others. I wish someone had convinced Nübling to cut most of the songs (less is more), cut the slow-mo floor-mopping (really), cut the repeated lines (the word “fuck” loses power with every utterance), cut the suitcase pile-up (we’ve seen it before) and cut the postmodern winks to the audience (yes, we know it’s theatre). Normally, I love inventive Continental directing, but this is not so much inventive as invasive.

So despite the beautiful air of melancholy and menace, the dance moves and the cabaret, there are too many trivial moments and the acting, led by Nicolas Tennant and Ferdy Roberts as the tecs, with sporadic help from Steven Scharf, Lasse Myhr, Mirtel Pohla and Çigdem Teke, tends to get drowned out by the excesses. Some of the German actors preen too much, and the Estonians are similarly self-indulgent. But if you would like a lesson in how to slow slow slow down a story, come and see this show. Nübling certainly knows how to spin things out.