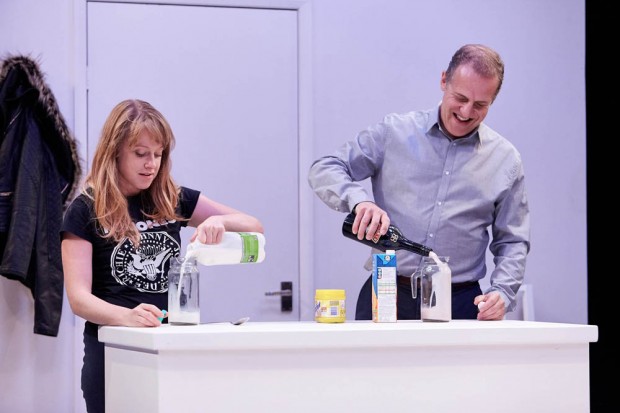 What’s incest got to do with a town in North Yorkshire? At first this seems a perfectly reasonable question to ask of Al Smith’s brilliantly written, if a little bit tricksy, two-hander, which begins somewhere nearer to Guilford than to Leeds. The central character is Patrick, the father of an under-aged teen daughter, and husband of a hardworking doctor. The daughter has a best friend called Carly, and an older boyfriend called Adam. At some point recently, she and Adam have gone to the northern town so that she can lose her virginity, so the title of the play is a wonderfully unlikely metaphor for an illicit adventure.

But it is, of course, not the only illicit feeling that pulses through this shocking and absorbing drama. At one point, the daughter asks her father, “Do you think we are inappropriately close?” An idea he immediately denies, but by then — more than halfway through the running time of 80 minutes — we know enough to question this denial. But Smith is much too clever to write a crass little play about incest. Or about abuse. All we really know, until the final thrilling scene, is that there is a strain of incestuous feeling between father and daughter, a bond that may or may not exist solely in Patrick’s head.

What’s so exciting about this debut play, which was first seen at last year’s HighTide Festival, is that the playwright has found a perfect form through which to explore the feelings and sensations of this family. Using two actors — one who plays Patrick and the other who plays the females in his life — he has created three scenes, each of which shows a different male-female rapport. Written with a great feeling for ambiguity and with a keen interest in the dark corners of desire and domination. It is a style of writing that is impressively intelligent, emotionally truthful and strongly resonant, and also beautifully controlled. Being a play about memory means that Harrogate has the capacity to surprise its audience at every turn.

As we watch Patrick struggle to create a satisfyingly erotic image inside his head, we can see that he is trying to recapture his youthful sense of desire, that strange land in which memory blurs with fascination. The haunting cover blurb on the playtext quotes his troubled speech: “I dream about you young. When I’m asleep you’re as young as the girl I met.” Yes, this is a story, with an unhappy couple at its centre, about masculinity in crisis. But can Patrick recapture this sense of excitement through role play? And who will enact his ideal female? Because we know that the actors are acting the role-play episodes carry a particular charge — it’s the kind of play that would repay multiple viewings.

Richard Twyman’s production, which embarks on a UK your after finishing its run here in London, buzzes with physical and psychological pleasures. Tom Piper’s empty and anodyne set suggests the blankness of a mind that peoples its thoughts with memories, while Nigel Lindsay and Sarah Ridgeway are perfect as the various combinations of couples. Lindsay acts differently because he plays different roles in life, as father and as estranged husband. Ridgeway plays different females with meticulous attention to small gestures and vocal inflections. Some moments between the two are electrifying. And the scene changes crackle with electric short-circuits. By the time that the final powerful image of a patient coming, “breath-by-breath”, to realise their own mortality arrives, it is hard to deny that this is a magnificent study of the human heart in all its darkness, cruelty and hurt.