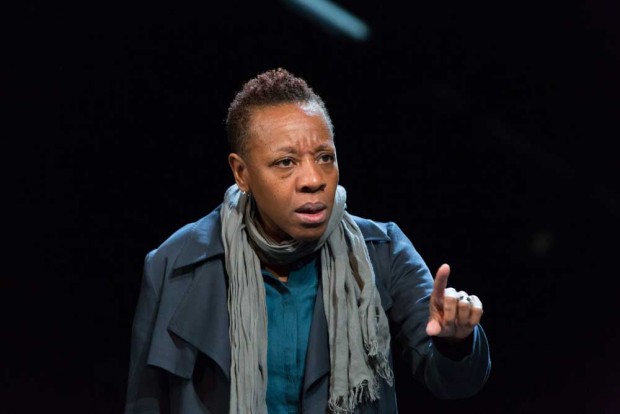 One of the most talented playwrights to emerge in the 2000s, debbie tucker green is a law unto herself. The best word to describe her is uncompromising. When I interviewed her in 2003 she refused pointblank to answer any questions about her West Indian background and since then she has steadfastly declined to discuss her work in the media. Like Caryl Churchill, she doesn’t do publicity. So that just leaves the work, which is always provocative, original and written in an unmistakable voice.

Her latest, Hang, is a short 70-minute piece about a middle-aged black woman whose family has been the victim of a violent crime. Set in a parallel universe, which the playtext describes with worrying hyperbole as “nearly now”, all the action occurs during a meeting between this woman (played by the superb Marianne Jean-Baptiste) and two officials, an older woman and a younger man, both working for an unspecified agency that is responsible for recording her decision about what method of execution she has chosen for the perpetrator of the crime.

If all this sounds vague it is because green has deliberately written the play in this way. Jean-Baptiste’s character is called Three, the officials are Two (Claire Rushbrook) and One (Shane Zara), and no details are given about the crime, about the perpetrator or about where and when any of this is happening. Okay, I know that this deliberate ambiguity is valued in some new writing circles, but I found it increasingly frustrating and annoying. It also makes any sensible debate about the morality of the play very difficult — green doesn’t want us to think; she just wants us to feel. To me, this is a cop-out.

So Three gets all the best speeches, beautifully crafted monologues that are accusatory, descriptive and wrenched from the gut. Her descriptions of the effects of the unspeakable, but completely obscure, crime are riveting, and Jean-Baptiste, whether clutching her handbag to her chest or staring out the opposition, finds impressive depths of feeling as she articulates her character’s pain and anger. Holding a wet wipe with unsettlingly nervous fingers, her tone of scorn as she attacks the bureaucratic platitudes of the officials burns in the air. Their empty formulations — variations of “It’s okay, as long as you’re okay” — provoke her beautifully bitter ripostes.

Gradually, a highly emotional picture of Three’s family life emerges: her hard-working husband, her sister Suzette, her traumatised children Tyrell and Marcia. As well as true, hard feeling, the text here has a brutal, burnished poetry, its repetitions and reiterations glowing with the heat of an acutely imagined experience. By contrast, the language spoken by Two and One is banal, bland, evasive, and usually in bad faith. When they tangle themselves up in a particularly stupid, but entirely typical, lie, there was a gasp from the press-night audience as the deception was revealed.

But the main set-piece of the evening is when Three has to choose the method of execution for the guilty man. As One describes, once again in bureaucratic language, the options of lethal injection, gas, firing squad, beheading and finally hanging, one of the neon strips in Jon Bausor’s atmospheric design begins to fizz. As you’d expect, the details of the mechanics of capital punishment are horrendous and appalling. At the same time, it also feels as if green is lecturing us, telling the Royal Court’s notoriously liberal audience something they surely already know: that the death penalty is hateful. Since she deliberately gives no details of the crime, nor of the judicial system, nor of the world in which these events are happening — and worst of all since there is no real story here — you leave the theatre frustrated rather than provoked.

Not only does green withhold information, she also concentrates on the victim and paints a picture of the black woman as a suffering figure with little agency other than vengeance. Doesn’t this re-enforce gender and racial stereotypes in an unhelpful way? So despite Jean-Baptiste’s nuanced and commanding performance, green’s own production lacks drama just as her text is short on intellectual stimulation. There is no real conflict here, and the system’s officials are cardboard Aunt Sallies — targets for the audience to laugh at — rather than individuals with a valid point of view. It’s a one-person play with a one-dimensional mindset. Watching it is a powerful experience, but not an enlightening one. Sometimes being a law unto yourself just leads to self-indulgence.