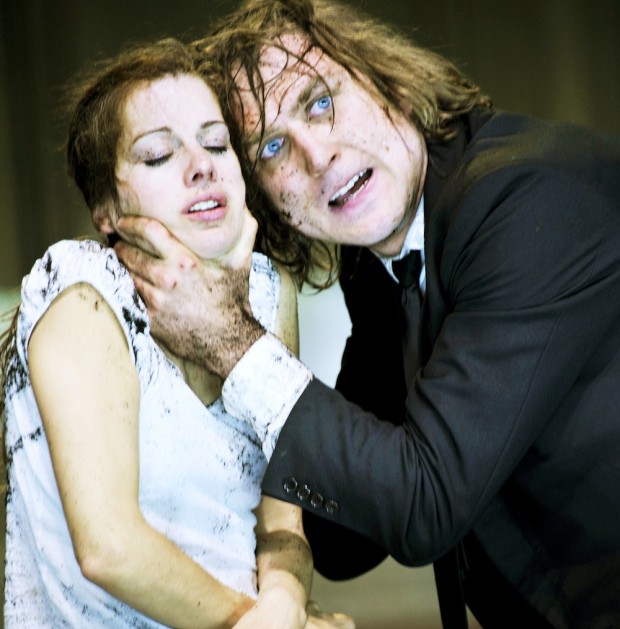 One of my major frustrations with contemporary theatre is Shakespeare. Especially the reverence that most English directors have for the text, no matter how obscure or difficult or incomprehensible it is. The message is: Hands off the bard! Don’t monkey with the words of a genius. But why not? Isn’t theatre all about adapting stories for the modern world? And that means adapting the words. Luckily for us there are plenty of Continental directors willing to adapt and to restage our great national icon.

Thomas Ostermeier of the Berlin Schaubühne Theatre is one of them. His Hamlet is an unashamed piece of director’s theatre. He has taken Shakespeare’s text, cut it, rearranged some parts and re-formed it into a sleeker, bleaker and even more compelling tale of political intrigue and cool contemporary culture. Typically, the first scene that opens the show, is not set on the battlements (as in the bard’s original) but is the funeral of old Hamlet, the prince’s father, mimed to the sound of an eerie track by Godspeed You! Black Emperor. Wow.

Ostermeier’s Prince of Denmark — played by the mesmerising Lars Eidinger — is a youth who is more at home in the trash aesthetics of a chat show, or reality TV, than at a royal court. His acting out of madness is delirious and deranged, and the production screams with contemporary references, bad language and craziness. With its microphones and video camera, this is a young people’s show — most of the rest of us have seen many of these tricks before. But there are some powerful moments: when I saw it, there was a gasp when Hamlet spat in Ophelia (Judith Rosmair)’s face.

Although you have to admire the sheer energy and punk disrespect of Ostermeier’s vision (there were several walk outs), the one thing that seems less than engaging is the acting. A lot of prat falls and deep immersion in the mud and soil, means that, apart from a handful of strong moments, you couldn’t really relate to any of the characters. In this play, what we long for is the psychiatrist’s couch; what we get instead is the disco floor.

But there is a real thrill in seeing a European director radically redesigning a classic, and this Berlin Hamlet does pack a punch. It reminds you of just how timid our theatre culture is, and will remain so until British directors leave behind their paralysing respect for the Shakespearean text, and get on with producing shows that have the power to excite, while at the same time engaging our emotions.