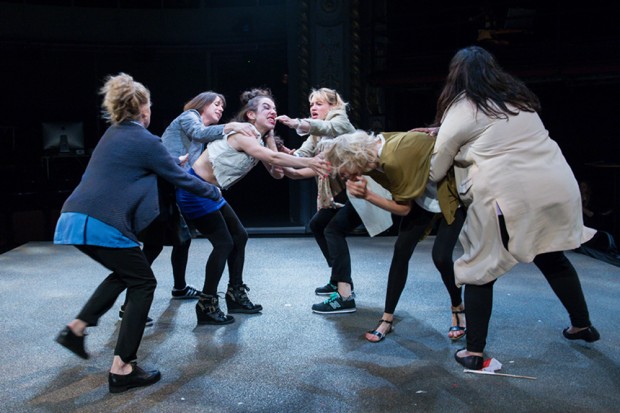 The Old Vic is one of the most attractive venues in London. Every wall seems to drip history; every glint of gold reminds you of its glorious past. It is also one of the most difficult to run. Kevin Spacey, its previous artistic director, made this thousand-seater museum work by staging very few, but very well-known and very starry productions. Its new boss, Matthew Warchus, has vowed not only to continue to book stars, but also to expand the repertoire beyond the classics. His opening venture — a new play about education by Tamsin Oglesby — is certainly well cast, with the ever agreeable Rob Brydon in the lead, but is it a good play?

First, the configuration of the theatre. For a while now this nineteenth-century barn, with its proscenium stage, has been reconfigured into a theatre in the round. The old stage has been turned into tiers of seats and the new stage is surrounded by banks of spectators. It is a very dynamic space, clearly crying out for stagings which have few props and rapid scene changes. As such, it’s a place designed for stories which can flow in leaps and bounds; it is a place of momentum. So it is perfectly suited to Future Conditional, which is a contemporary take on an old genre: the state-of-the-nation play.

Oglesby tackles the subject of education as a metaphor for the country’s problems. As the large young cast gathers around the stage during the opening of the evening, each playing a recorder, a series of quotes from politicians — Harold Wilson, Margaret Thatcher and Tony Blair — remind us that education has been a subject of controversy for decades. It seems to symbolise Britain’s poor standing in the wider world and is a powerful indicator of our post-Empire social failures.

The play takes three routes through the subject: on a personal level, it tells the story of Alia, a Pakistani refugee inevitably reminiscent of Malala Yousafzai in her passion for education and her almost innocent criticisms of the system. Her teacher, Mr Crane (played by Rob Brydon with a calm confidence that is immediately attractive), is also shown in action, inspiring his secondary-school class and then having to deal with the bolshie parents of disruptive pupils.

On a wider social level, the story switches to the local primary-school gates, where parents of different backgrounds gather to drop off and pick up their kids, all of whom are about to go to secondary school. The mothers are vividly drawn, from the Guardian-reading Hettie (Lucy Briggs-Owen) and the highly principled Suzy (Natalie Klamar) to the working-class Kaye (Amy Dawson). Although the characterisation of these individuals is quite clichéd, all “innits” and broad brushstrokes, and the performances are lively to the point of caricature, Oglesby and Warchus succeed in showing us the typical strategies adopted by parents to get their kids into the “right” secondary school.

On the level of policy, the play also shows several brainstorming sessions by a group of blue-sky-thinking wonks who are investigating how to make the British educational system more egalitarian. Here the sharpest conflict is that between the posh Etonian Oliver (Joshua McGuire) and the northern and working-class Bill (Brian Vernel), who debate privilege and standards in education with fire and passion. At one exquisite moment, the distribution of flap jacks during a session turns into an argument about self-discipline and discipline in schools, before degenerating hilariously into a food fight. Yes!

Warchus’s production, neatly designed by Rob Howell, is fast-paced and colourful. In the scene changes, the cast of 23, mainly dressed in school uniform, rush onto the stage to change props while young musicians Carmen Vandenberg and Ben Lochrie play electric guitar rock riffs, a combination which energises the stage space and adds a lot to the excitement of the evening. Despite this, at first, I have to confess that I thought that the acting was a bit too exaggerated and that the playwriting was too banal to be gripping, as one cliché bumped into another. At times, I felt that the rock-music scene changes were more exciting than the play. And that can’t be a good thing. But then things got better — the second half of the evening definitely caught fire, and it all ends on a passionate cry of hope.

This is largely due to Bryden’s slow burn of a performance, as he gradually emerges as the kind of teacher — sincere, committed, responsive, imaginative — that we have all dreamed that maybe our kids might one day have (the use of the future conditional is part of the play’s overall message). Likewise, newcomer Nikki Patel gives Alia a disarmingly cool openness and a sense of integrity. So Future Conditional ends on a powerful, and rather moving note of hope, which is almost mythical in its intensity. This is not about realism, but about feelings. With the election of Jeremy Corbyn as the new Labour leader, hope is in the air and the play, for all its problems — the three strands don’t really come together coherently and the character of Alia has been conceived in such a way that religion has been artificially removed as a subject of contention — seems to articulate all that. It is both a howl of rage at what is wrong with this country (class and privilege) and a heartwarming cheer for change.