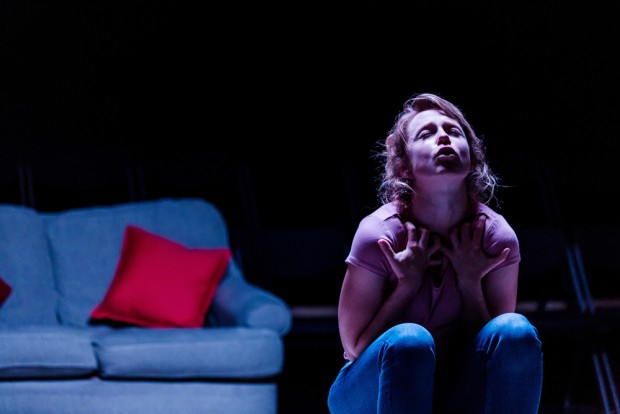 In the blame game mothers are an easy target. Have you messed up your life? Blame mother. Are you unhappy with your partner? Blame mother. Has your cat died? Blame mother. And if you happen to be poor, the blame increases exponentially. But while tabloids demonise the working class — you know, single mums and bling-laden youth — theatre tends to be nicer, adopting the lonely and succoring the disaffected. It’s a place where mothers can give their own point of view. Such is the case with Phoebe Eclair-Powell’s new play, Fury, which is every bit as powerful as its name suggests, and also raises questions about how the working class is portrayed on our stages.

The play tells the story of Sam, a young single mother who grew up in care and who now lives alone in a south-London council flat with her two small boys, Mica and Jordan. Although she still gets on with their father, Rob — now “married to a vain young woman called Carly” — Sam is isolated and lonely. Father dead, mother absent, she has no near relatives. She has no mates. As she tries to scrape a living doing cleaning jobs for an agency, she often leaves her two kids alone, thus making herself vulnerable to the Social Services and to predatory men. As luck would have it, a young man, the student Tom, shares the flat above Sam’s. When they meet, he is drawn to her although she is much less keen on him. Equally needy, Tom is also a bit vicious, and he bullies Sam into sex. When he suggests that she clean his flat, with extra payments for sexual services, this disfunctional relationship roars into life — and heads straight for a crash.

Fury is a sympathetic account of the type of single mother often demonised in the press. Eclair-Powell, who is resident playwright at the Soho Theatre and was a finalist in this venue’s Verity Bargate Award last year, makes it clear that Sam is not a cipher, not a symbol, not entirely typical. She brings out her individuality, and her impulsive and reckless personality without being judgmental. At the same time, she underlines the class differences between her and the student Tom, as well as his casual sexism. Both of these protagonists are capable of the furious emotions suggested by the story’s title, and Tom tortures Sam by playing loud music in the flat just above her head. The relationship is well observed and perceptively written, although Tom could have been rounded out more as a character.

What makes the 70-minute play fast-moving and often delightful is Eclair-Powell’s use of a chorus of three actors, who each have a different character: the Woman (Naana Agyei-Ampadu)is unsympathetic, the Man (Daniel Kendrick) ambivalent and the Fury (Anita-Joy Uwajeh, and a nod towards Greek tragedy) is rooting for Sam. This chorus narrates some of the story, comments on the attitudes and actions of Sam, Tom and Rob (played by Kendrick), and bears witness to the sadness at the heart of the situation. They also add a feeling of dynamic vitality to the whole story, especially with their singing — “Get Free” by Major Lazer or “Daniel” by Bat for Lashes or “In for the Kill” by La Roux — and dance moves. Suddenly, the stage comes alive and a rather sorry tale gets a strong injection of theatrical pleasure. It also involves us the audience not only as spectators, but also as jury members, edging us to make judgments and reach conclusions.

But although the play is morally engaging and emotionally truthful, it does raise some issues. If Eclair-Powell avoids making Sam an inarticulate symbol of poverty, as Leo Butler did with his Boy, her writing does give Sam an articulacy and self-awareness which is not always convincing. On the other hand, it makes a refreshing change to see a working-class character who isn’t a complete chav. Likewise, towards the end, the middle-class Tom comes up with an explanation of his own nastiness (blaming mum), which is similarly a bit too explicit. But, at its best, as in Sam’s dialogues with Tom and Rob, and her meeting with a former female friend (which tells us a lot about why she is so alone now), the playwright’s verbal exchanges ring true, and the way the chorus comments on the action is beautifully crafted.

Director Hannah Hauer-King uses the upstairs studio space of the Soho to good effect, and her production is fleet-footed, well-grounded and finally moving. She is helped not only by Anna Reid’s minimalist design, but also by Natasha Chivers’s brilliant lighting, which uses low ceiling panels to create the shifting ambiance of the story. As Sam, Sarah Ridgeway delivers a smouldering performance which delivers its threats with intelligence and restraint: her pain is palpable, as she hugs her stomach and absorbs the punches life throws at her. By contrast, Alex Austin’s smooth Tom grows gradually from a shy but likeable guy into something like a tyrant. If the play is perhaps too sympathetic to its central character, and maybe a bit too dismissive of social workers, it still offers a powerful and at times uncomfortable account of a human tragedy.