Even Stillness Breathes Softly Against a Brick Wall, Soho Theatre 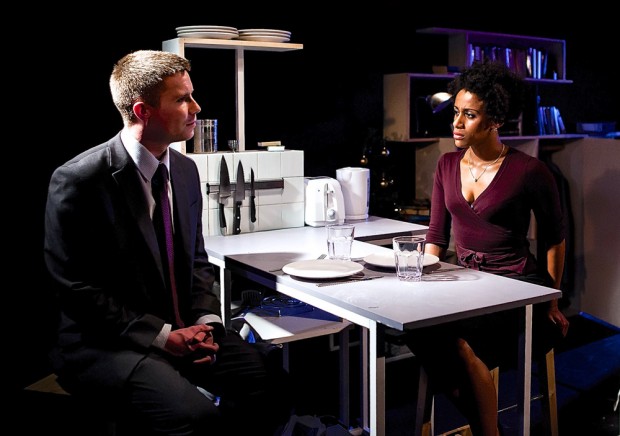 I love poetic play titles, but even I would admit that sometimes they are difficult to remember. In this case, the name of Brad Birch’s new play has taught me a lesson that I’m happy to pass on. It’s this: if you go and see this show please spend a few minutes practising the words Even Stillness Breathes Softly Against a Brick Wall before arriving at the box office. It will help you save face. It will prepare you for the evening ahead.

This is one of those plays that are best viewed after a boring day at work. It is a two-hander about a smart young couple, simply Him and Her, who have a work routine that goes a bit like this: SAME THING DAY AFTER DAY – TUBE – WORK – DINNER – WORK – TUBE – ARMCHAIR – TV – SLEEP – TUBE – WORK – HOW MUCH MORE CAN YOU TAKE? – ONE IN TEN GO MAD – ONE IN FIVE CRACKS UP. Indeed, by the end of the 80-minute piece, Him and Her have indeed run into trouble.

As the unopened letters that symbolise unpaid bills stack up, the pressures of conformity begin to eat up their lives. What Birch expresses so well in the first half of the play is the misery of everyday life, the soul-sapping tedium of routine and the smallness of lives defined by poorly paid jobs. Much of the dialogue begins with the personal pronoun “I”, an indication that any revolt against consumer capitalism has to start with the subjective feelings of the individual.

As directed by Nadia Latif, on Lorna Ritchie’s all-mod-cons set, the play has a strong sense of claustrophobia and the idea that consumer society results in a living death, with all of us sleepwalking towards the grave, runs through the events like a slash of red lipstick. When, asks Birch, will we ever learn to say “No”? As Him and Her, the young actors Joe Dempsie (Skins; Game of Thrones) and Lara Rossi chart the passage from banal routine to excited defiance, although their expressive range is rather narrow. Their moments of mad love are not as deeply felt as they could be, and Birch’s play ends with a whimper rather than a bang. Somehow it never manages to travel as deeply into the black heart of extremity as its logic demands. And because of that it never achieves the experiential intensity of, say, Jim Cartwright’s Road or Sarah Kane’s Blasted. Still, there is a subversive joy in its gestures of anger, and some of its stage images linger to haunt the imagination — just like its title.