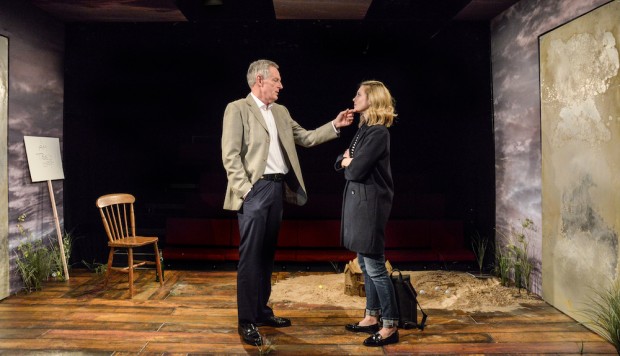 In the medieval Mappa Mundi, which hangs in Hereford cathedral, the Garden of Eden is pictured at the top of the world; paradise is the height of human aspiration. In Hannah Patterson’s new play, her third to be staged by Edward Hall in the Downstairs studio space of his theatre, Eden is an idyllic coastal village, with its sand dunes a site not only of natural beauty but also of scientific interest. As one character says, it’s “the most perfect spot I think I’ve ever seen.” His next comment kicks off the drama: “Which makes it utterly ripe for development.”

The person speaking is billionaire Aaron Chase, a middle-aged American real-estate developer, who wants to build a luxury gold course in the lovely surroundings of Eden. But, anticipating some local protest, he decides to hire young Sophie, a former inhabitant of this area and now a property marketing manager, to help sell the deal to the locals, who include her former lover Jane, and Jane’s father Bob, a local farmer. But while Sophie had moved away to pursue her career, Jane has returned to her home town after studying geomorphology. With Sophie advocating for the golf course — employment opportunities; new hotels; new houses — and Jane defending the unique natural ecology of the place, the battle lines are quickly drawn.

Just in case audiences are too slow to realize who the sports-loving American tycoon might be, this production by Matthew Xia provides him with a red baseball cap. Yes, he’s actually not Chase at all; he’s Donald Trump. And the play is based on his purchase of the Menie estate in Aberdeenshire in 2006, and its conversion into a golf course by 2012, in the face of local opposition led by residents, some threatened with eviction, who called their resistance group Tripping Up Trump. While it’s perfectly laudable to base a play on a true story, especially one in which corporate capitalism is pitted against environmental campaigners, I must say that Patterson’s attempt really does fall flat.

To begin with, it does strain credulity to believe that a character of the financial acumen and stature of Chase would employ an unknown PR executive to work on a project that is so delicate just because she used to live in the same area. Actually, corporations usually hire the best people to do the biggest jobs, and they have shown themselves pretty capable of doing their research and their work, whatever you might think of the results. In Eden, the set-up is not only unconvincing, but also predictable. The minute that Sophie meets Jane again, even after years of separation, it’s pretty obvious that their love story will rekindle and that Bob, who was once a father figure to her and is now the chief protester against Chase, will also make demands on her loyalty.

Added to the predictable plot is the maddening fact that the text of the play is astonishingly banal. The characters explain everything to us as if we were at school; everything’s on the surface; everything’s clear; there is no subtext at all. Plot developments, including the gradual awakening of local councillor Alison, are clumsy, so much so that Chase’s attempt to bribe Bob by giving him a lowly job or buying his farm for a pittance sound positively silly. In this kind of writing there really is no sense that Sophie is truly conflicted or that the story could go either way; everything is mind-numbingly predictable from start to finish. By the end, all our liberal prejudices remain intact — surely a definition of unchallenging political writing.

The central theme of Eden is only too familiar. On the back cover blurb of the play text, it says that it is about “the importance of fighting for what’s right”. Okay, but to say that it’s a modern day David and Goliath story is to hype up a meagre tale to the stature of an archetypal myth. And it isn’t that. The piece has a preachy feel in which no one could possibly argue that Sophie should betray her old lover and Bob in favour of Chase, even if she might get mega-rich in the process. Without this possibility, the central conflict petters out not with a bang but with a whimper. Somehow this is a play in search of a metaphor.

None of this gets any help from Xia’s production, which places the action, such as it is, on a narrow traverse stage which feels very cramped for a story about the wind-swept dunes of a coastal village. Designer Jasmine Swan scatters some sprouts of beach grass on her wooden set, but a small pile of sand and a trickle of the same from on high really does not evoke the English coast. A few projections, and blood-red sunsets, are no real aid to the imagination either. Nor is Xia’s directing up to much; I simply could not believe either in the play’s original premiss nor in many of the exchanges between the characters. It also feels a bit insensitive to have one black actor playing all the walk-on parts: reporter, tailor, caddie, security guard. What is this? A stereotype fest?

I saw Eden at a preview so I can’t comment on how well the acting has developed. But Michael Simkins makes a good fist of creating a Trump-like figure who stays on the right side of caricature, while — on the night I saw the show — both Yolanda Kettle (Sophie) and Mariah Gale (Jane) seemed underpowered, and there was not much emotional dynamism between any of the people in the story. Sean Jackson, in what you could call the Enemy of the People role of sole protester who is attacked by both the corporates and by the locals, was well grounded, while Laurietta Essien as Alison and Adrian Richards did what they could with their underwritten parts. My main problem, however, was with the writing: for all its good intentions, I just didn’t believe any of it.