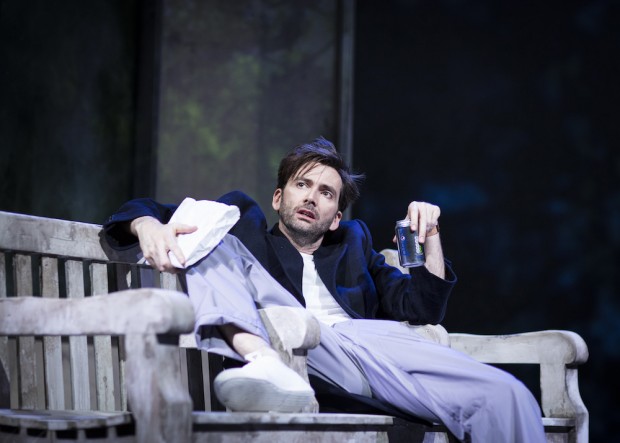 Updating the classics is not without its pitfalls. How can a modern audience, which has a completely different set of religious beliefs, relate to a 17th-century morality tale in which the lead character behaves badly, and I mean really badly, but gets his comeuppance by being roasted in hell fire? This is the case with Molière’s Don Juan, or The Feast with the Statue, which was originally staged in 1665. In 2006, playwright and director Patrick Marber took this classic and pummelled it into shape as a play for today, complete with contemporary references aplenty. Now it’s being revived, with some rewrites, in the West End as a star outing for David Tennant (taking time off from Broadchurch).

At the start of the evening, as the sinister chords of Mozart’s Don Giovanni rumble in the background, Tennant sidles onto the stage. He is DJ, privileged son of an Earl, and has a fantastic sexual appetite; he chases skirt compulsively while openly acknowledging the fact that he’s never really grown up. He has just ditched his new wife Elvira, an innocent charity worker, and pursues every woman he comes across. Helping him in his seductions is his working-class chauffeur sidekick, Stan, a Londoner who dreams of nothing more than settling down. The plot is powered not only by DJ’s lust, but also by the desire for revenge of Elvira’s two brothers, whose vengeance involves our libidinous libertine’s own father.

Marber’s updated rewrite is energetic, and sparkles with comic brio. The play radiates a dark wit and is studded with vivid and memorable lines: DJ is described by Stan as “a savage, he’s a pirate”, “a slag”, “a cheating, betraying, lying dog”. And his master boasts, “I’m the Gandhi of the gang bang, the Bishop Desmond Tutu of titillation, the Dalai Lama of desire.” At one point, he nods at Donald Trump by saying: “I’m not a rapist — I don’t grab pussy.” And there’s a real frisson of danger, which silences the audience, when DJ asks a Muslim to blaspheme against Allah. The tension is palpable.

Typical of our contemporary sensibilities is Marber’s sketch of this loathsome Lothario’s psychology. Having lost his mother at an early age means that he feels insecure about women; he doesn’t trust them. He feels compelled to possess them. But he cannot love; he is constantly alone. As a sex addict, DJ is always lonely. His solitude is unbearable. Yet he is also sadistic; he likes to hurt people. Not very nice. He constantly procrastinates about giving Stan his pay. His compulsive womanising, his drug taking and his drinking all suggest a troubled mind, which expends its energies in distracting itself from painful thoughts. And he also has a streak of the nostalgic: “I remember when cappuccino was a delicacy.”

During the evening, which is slightly marred by an unnecessary interval, Tennant conveys the visceral delights of sexual pursuit, and of sexual conquest. He throbs with lustful thoughts in a production that almost stinks of sex, sex, and yet more sex. Nimble on his feet, with darting eye and a mixture of intense gazes and smooth physical contortions, Tennant is always on stage and has a magnetic presence. In one key speech his whinnies of contempt as he excoriates the “me generation” are fab to behold. He brings out not only his character’s cruelty, but also his immense charm. You really do believe that he can be irresistible.

Marber directs this buccaneering production, which has a pastel set by Anna Fleischle that evokes the Casanovan 18th century, and is full of Mozartian music and thumping dance tunes, of video clips and fun dance sequences. Among the rest of the large cast, Adrian Scarborough is superb as Stan, who keeps a database of DJ’s women, and is part envious and part contemptuous. Danielle Vitalis plays the abandoned if cute Elvira, and David Jonsson and Mark Ebulué are her vengeful brothers, who at one point even discuss the ethics of revenge. All these elements combine in a hymn to Soho past and present, to its alleys and its squares, its Restoration statues and its seedy sex industry. Yet despite its gloriously filthy language and gleeful comedy, which provoke gales of laughter, its verbal agility and its contemporary references, you can’t quite shake off the feeling that DJ’s final punishment is not quite as scary as it was in Molière’s original. I guess there are some things that, however hard you try, are impossible to successfully adapt.