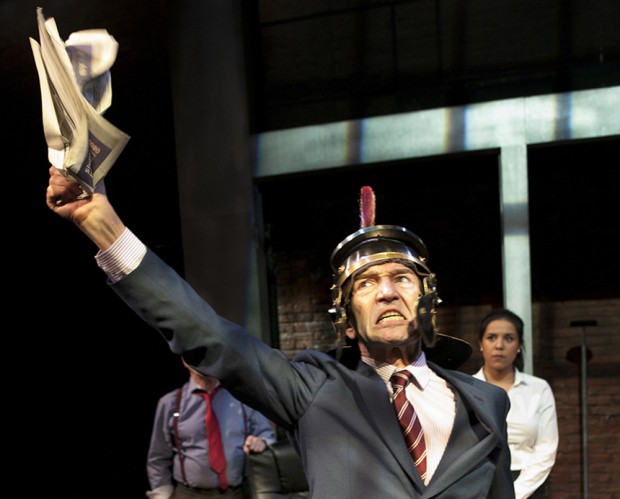 The tabloid press is a national disgrace. Now, after the slight changes brought about by the phone hacking scandal, all the evidence suggests that they will continue to behave as they have always done, hysterically attacking leftwing politicians and bulldozing the sensibilities of any ordinary person unlucky enough to be caught in their maw. Despite this, many Brits read and enjoy these comics, often with an attitude that is reminiscent of a patient parent humouring a wayward child.

Such is the case with former showbiz editor of the Daily Express Mark Jagasia’s black comedy Clarion, which was first seen to this venue in April, and now returns with a vengeance, ranting and screaming its tabloid invective. Set in the offices of the Daily Clarion, which is headed by its eccentric editor Morris Honeyspoon, the play explores a day in the death of British journalism. Honeyspoon is a larger-than-life creation, who bellows at his staff, puts on a Roman centurion’s crested helmet at moments of particular madness and generally behaves like an overgrown schoolboy.

Not that his long-suffering staff are that much better than he is. There’s Verity Stokes, a hard-drinking hack columnist who was once an award-winning foreign correspondent; Albert, a tradition-minded and rather dim news editor who doesn’t give a monkey’s; Josh, an English Literature graduate who has been landed with the job of immigration editor; and Pritti, the work-experience youngster with plenty of ambition and very few scruples.

As they gather for a morning conference, it is clear that doom is in the air — at least according to Dickie Dufois, the paper’s star astrologer. With the proprietor, Benny Panagakos, an whose other business interests include Piggy Honkers, “Britain’s Bounciest Chain of Topless Hamburger Restaurants”, on his way to pay a visit, it is clear that Morris wants results. Go out and get a good story about scrounging migrants — and don’t come back if you fail!

As Panagakos’s henchman, the God-loving Clive Pumphrey, puts pressure on Morris to find the lost dog of chav celebrity Sapphire, and to sack the expenses-heavy Verity, Jagasia plants a lovely MacGuffin, a copy of a compromising letter that could ruin them all. The plot twists and swerves with all the serpentine finesse of an editorial policy, and the jokes come fast and pretty thick. It’s a play of farcical somersaults and inspired silliness that treats its main themes — Islamophobia, loyalty and tabloid excess — with a hilarious mix of seriousness and frivolity.

Given that the Daily Clarion has featured anti-migrant stories on its front page for 300 days in a row, this lurid satire clearly indicts not only Morris, and others like him, but also questions the British public’s taste for sensation and prejudice. After all, if huge numbers of people didn’t buy the tabloid papers, they wouldn’t be able to spread their lies and their exaggerations.

Arcola supremo Mehmet Ergen’s sprightly production, designed by Anthony Lamble, is lead by two riveting performances from Greg Hicks and (Morris) and Clare Higgins (Verity). As the tinpot Caesar chief, Hicks strides around the stage, crouching in a reptilian poise that terrifies not only his staff, but mesmerises the audience too. He rasps, he’s paranoid and he’s a bully. Only Hicks could also give us glimpses of his tattered humanity, his pride, his moments of lucidity. Compared to this monster, Higgins gives a less broad but deeper performance as the ageing hack whose litany of foreign hotspots from the 1980s to 2000s is full of suppressed emotion. She is the play’s battered heart. The rest of the cast — which includes Jim Bywater’s Malapropish Albert, Peter Bourke’s prayer-hungry Clive, Ryan Wichert’s calm Josh and Laura Smithers’s pushy Pritti — are likewise good, and they contribute very well to the humour of a fun evening.