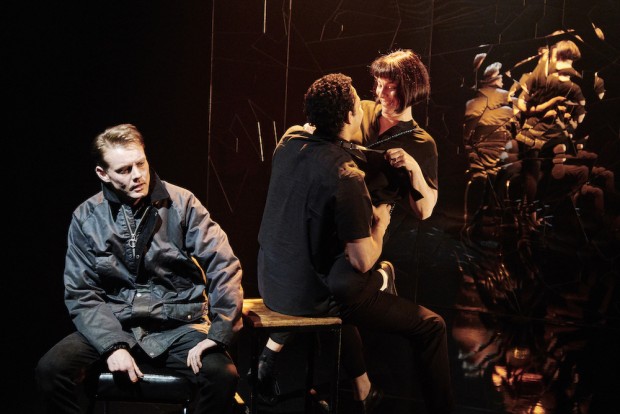 Irish playwright Dylan Coburn Gray’s new play won the Verity Bargate Award in 2017, and his reward is a fine production of this beautifully written account of one Dublin family over several decades. It is a light-touch epic which is partly a humorous account of ordinary people’s daily lives, partly a meditation on time and partly a social history of changing attitudes to family, and to sex, over the years in Ireland. Coming to the Soho Theatre after opening at the Abbey in Dublin last month, it is a short poetic tribute to the nitty-gritty of quotidian living.

Opening with a taxi driver, and a typically allusive chorus of voices, this 90-minute play rapidly embraces the down-to-earth basics of childbirth as a group of women make their feelings clear in a maternity ward. There’s no sentimentality about motherhood here: the physical details are excruciating. Then the focus tightens: one of the women, Kate, is having her first child, with her partner Rob lending his support. But if she might stop at one child, the bigger picture reveals that her mother, Brigid, had 10 years of pregnancies, resulting in a family composed of one girl, and three boys. In the old days, Roman Catholicism meant that contraception was not that easy to get.

This sense of time passing, with archetypal situations being repeated over and over down the generations, often with significant changes, is at the heart of this poem. We get a glimpse of Frank, Brigid’s husband, a taciturn man who used to take his wife to dances, and this rather sedate enjoyment of pleasure is contrasted with the discos and raves of more recent years. While in the past sexuality was shrouded in silence, and taboo, today it is in-yer-face and all over the internet: but Coburn Gray’s play quite rightly points out that teen awkwardness is a recurring constant. Perhaps, it is implied, social changes are more superficial than they at first seem.

As Kate and Rob begin to bring up their new baby, Brigid — now a widow — is declining into a second childhood, starting to suffer from dementia. Helped by her care worker, a Filipino called Ian, she struggles to complete a crossword, and her distress is palpable. One of the big themes of this richly layered piece is memory, and the decay of remembrance is equated with a diminution of life. As well as memory, there are several mentions of mirrors, whose reflections of the faces and bodies of the characters are a reminder of the passing of time. Mirrors reflect, but the word “reflection” also means concentrated thought. As we get older, ideas deepen: we begin to resemble our parents, and youthful tautness starts to sag. Grey hair, but colourful recollections.

At times, there’s a quiet sadness in the writing, as the patterns of life repeat and repeat again. What lifts the text is the playwright’s sense of humour and his word-drunk finesse. Like a mixture of Dylan Thomas’s Under Milk Wood (lots of black sea) and James Joyce’s Ulysses (lots of neologisms), the words dance, glimmer and gleam like a glitter ball while beyond them is a dark silent universe of cold un-life. Each excursion, whether to the shops or to a dance, is a mythical odyssey, with archetypal shadows falling over quotidian lives. There are risks in this approach, and I was happier when the narrator was voicing poetic descriptions than when ordinary people came up with unlikely imagery. There are several moments when you are almost invited to protest: no one actually talks like that!

Using a cast of only six, Caitriona McLaughlin’s big-hearted production nimbly travels across time and place, while Sarah Bacon’s set emphasises the idea that the mirror of our self-understanding can be shattered by unexpected events and unexplained feelings. All of the actors — Amy Conroy, Jade Jordan, Blaithin MacGabhann, Daryl McCormack, Clare McKenna and Dan Monaghan — play many characters each, taking turns to narrate and then coming together as a chorus at regular intervals. The effect is verbally musical and quietly enchanting, although it won’t appeal to those that find poetic word play too artificial and fanciful to be convincing. Beautiful writing is enjoyable to hear, but it only gets you so far.