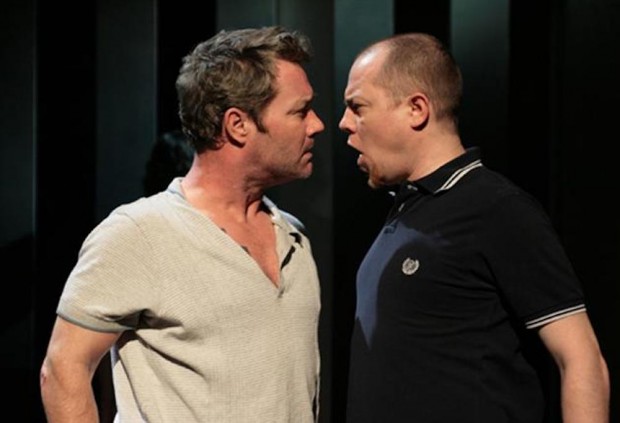 Some of the most evocative place names in history are the names of prisons. Robben Island. Alcatraz. Lubyanka. Rikers. The Scrubs (bathetic, I know). You can easily see why: the feelings of pain, the sense of injustice and the desire for vengeance all seem to mix together in a psycho-brew that makes the deepest recesses of the brain burn with the anguish of incarceration, and the heady smell of freedom on release.

In Martin Lynch’s Chronicles of Long Kesh, the story of the notorious Northern Irish prison is told from its inception as part of the policy of interning Republicans in 1971, through the terrible years of dirty protests and hunger strikes in the top-security H-Blocks of the Maze, up until the end of the 1980s. More or less. It’s a story of protest, endurance, and, entertainingly enough, humour too.

While the genre of the Troubles play used to be a rather po-faced creature, with few playwrights daring to make jokes about what was clearly a life and death struggle, things have relaxed a little over the past decade or so. Looking back, not only in anger, but also with a wry smile, allows Lynch to present a reasonably balanced view of this dark chapter in Northern Irish history.

Using six actors, five men (led by Marty Maguire and Chris Corrigan) and one woman, to play a whole panorama of characters — prisoners from both the Republican and Loyalist camps, wardens, the innocent as well as the guilty, the sad as well as the vicious, plus wives and newsreaders — enables Lynch to cover an enormous stretch of ground, and gives his play an epic, even Brechtian feel. This aspect of the show is encouraged by the use of very simple props.

These chronicles are narrated by Freddie, a prison officer who is also an everyman, and the story focuses on a group of Republican and Loyalist inmates over a couple of decades. The show is heavy on personal experience, light on politics. We learn a lot about the personal characters, antagonisms and endurance of the prisoners, especially during the IRA dirty protest and hunger strikes, which were undertaken to achieve political status, but not very much about political conflict, or ideology.

The climactic moments, such as they are, involve the news of Bobby Sands’s death during the hunger strike, and the most intense political anger is that directed against Maggie Thatcher, and her government’s policies on Northern Ireland. At the same time, Lynch also deals fairly with the Loyalist inmates, who are also shown as distinct individuals.

But the show is low on historical explanation, and very low on politics. Clearly Long Kesh and the Maze became seminaries of political education for their inmates, and policies on either side of the divide were made in consultation with those who were suffering incarceration. There are precious few such discussions here, however, and the focus is more on everyday life, with daily privations and relations with absent loved ones much to the fore. Oh, and the music.

Instead of having Republicans bashing out the old protest songs of the movement, this show, directed with speed and clarity by Lisa May and Lynch himself, rocks to the sound of Motown, and sweet soul music. As the inmates imitate Marvin Gaye, and other smooth crooners, there’s a distinct sense of nostalgia for the past, the music injecting an emotional zing into the story. It’s also what makes it comprehensible to people who didn’t directly experience it — if prison place names evoke sadness, song names evoke pleasure.