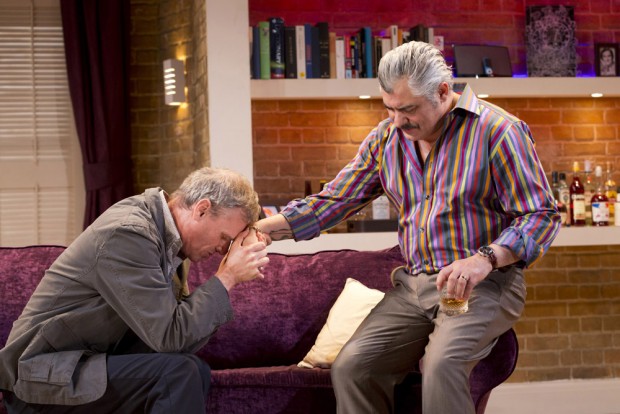 Plays about media folk and creatives, such as Joe Penhall’s Dumb Show and Stella Feehily’s O Go My Man, are not uncommon in British theatre. They usually have recognisable middle-class settings, recognisable middle-class characters, and a couple of handfuls of punchy one-liners. The writing and acting usually veers from soap-opera parody to perceptive analysis of the way we are defined by our media-fuelled obsessions. So where on this scale of quality is writer, director and actor Matthew Dunster’s latest play?

The set up has an agreeable symmetry. Michael and Gordon have been good mates since they attended acting school together in the 1980s. Now, some 30 years later, Michael is a mega celebrity — Mr Saturday Night TV — but Gordon is a failed actor who is struggling with enormous debts. When Gordon asks Michael to lend him a huge sum of money you just know that this request will blow their relationship apart. And of course it does. As Dunster puts it, “Act One best friend asks oldest friend for cash — Act Two he disappears.” Except that Gordon doesn’t exactly disappear. And by Act Three, Michael wants his money back. Also caught up in this fatal transaction are Gordon’s pill-popping wife Sally, and their spoilt daughter Effie, who gets married to Castro, an unsuccessful young film-maker. Plus there’s Michael’s second wife, Louise, who kick-starts the play with a monologue.

Throughout the piece, Dunster shows off his gift for monologues, and the plotting of the story is tight and soaked with a heavy scent of poetic justice. As Michael’s star inevitably wanes, so Effie gradually becomes more and more successful, finally branching out into a green-friendly clothing company, while Castro becomes a shrill critic of the oil and gas companies that despoil the Niger Delta. while this seesaw of fortune gradually tilts, the bigger themes slide from one side to another.

At first this is a comedy of middle-class manners, with a set which always features French windows, and we’re invited to be sceptical of the generosity of those who are rich celebrities. Then we find ourselves sympathising with northerners who get mocked by Oxbridge types, and long for revenge. Then we’re horrified by how celebrity gives media folk power, and how power is always abused. In predictable ways. Lastly, we despair of money, power, success, oh — and of friendship. That’s an awful lot of despairing.

At the same time, we are dazzled by a panorama of world problems, from rapacious capitalism based on Mumbai sweatshops to the man-made ecological disasters on Sakhalin Island in the north Pacific Ocean. By the end of the evening, the mind is full of a mix of vivid images: protests in Zimbabwe, fumblings in lifts, dead whales and oily polluted water. But while Dunster is observant enough to make Castro an ambiguous figure who uses environmental despoilation as an elaborate chat-up line, that does not prevent his long Act Three speech about the injustice of the world from being reactionary in its invitation of mockery from the audience.

But if there are as many bright ideas in Children’s Children as there are bottles of shiny liquor on Michael’s cocktail shelf, there is something drily despairing about the whole play. Both generations, the Thatcherite children of the 1980s who are obsessed with fame and money, and the newer generation, who are obsessed with being cool, come out equally badly. The youngsters especially are all talk and no action. By the end of the evening, even their children’s children look as if they might also be doomed.

So although Dunster’s writing is perceptive and especially good at showing how people use clichés to deflect the truth, the play has a big hole at its heart: it lacks a character we can love. None of the people we watch are attractive; all behave badly. And the effect of basing the criticism of celebrity and creatives on a group of morally ugly and selfish people is deeply dispiriting. For all the skill of Jeremy Herrin’s production and Robert Innes Hopkins’s design, and good performances from an excellent cast — Trevor Fox and Darrell D’Silva as Gordon and Michael, Sally Rogers and Beth Cordingly as Sally and Louisa, and John Macmillan and newcomer Emily Berrington as Castro and Effie — this is a joyless and depressing evening. Like Effie’s nettle tea, it leaves behind a bad taste, one of cynicism.