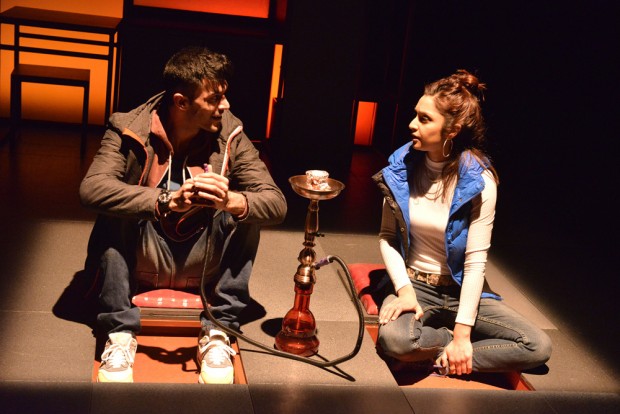 Tamasha is a new writing theatre company which specialises in plays — often adaptations or reimaginings of classics — written from an Asian perspective. As the company celebrates its 25th anniversary, it is touring this, the latest play by Emteaz Hussain, who worked with them on her debut, Sweet Cider, in 2008. Blood is a co-production with the Belgrade Theatre, Coventry, where the play opened in March. It’s a beautifully imagined bitter-sweet love story told by just two actors.

Sully (Adam Samuel-Bal) and Caneze (Krupa Pattani) meet in a college canteen. They are opposites, and boy do they attract. Caneze is a posh girl, conscientious and studious; Sully is more of a clown, rapping like a black boy and lauding the joys of Nando’s. For their first date, he takes her there — only to discover that she’s a veggie. Then she introduces him to the chilled-out delights of a shisha bar, and while they share a smoke, their love begins to grow. Because Caneze lives at home, Sully has to climb secretly up to her bedroom — in a warm-hearted parody of the balcony scene from the Romeo and Juliet story. But trouble soon appears and it comes in the shape of family. Caneze’s family see Sully as a bit of loser, and her brother Saif, who has connections with some Pakistani gangsters, does his best to discourage the young suitor. Class is an issue. At the same time, Caneze’s mother sings the praises of Yousuf, a friend of Saif’s.

This combustible mixture explodes in two episodes of frightful violence, which leave both Sully and Caneze with new perspectives on themselves, their families and each other. The play is both a hymn to the joy of passionate embraces and an exploration of sadness, of loss, of longing. At its core, it explores the idea of family. If blood is thicker than water, does this mean that there is no love without shedding another’s blood, or one’s own? You feel that both Sully and Caneze — especially Caneze — really have to struggle to free themselves from their dependence on family.

For the family can be a prison as well as a refuge, and true independence is hard to come by, requiring a mental fight as well as physical escape. In 80 minutes, Hussain covers these big issues with a light touch, lots of humour and a rich mix of ingredients. She blends youth chat with digital slang, Mirpuri-Punjabi words with Sufi poetry, Muslim prayers with a powerful attack on family hypocrisy. Did I understand every single word? No, of course not. Did that matter? Not a bit. Like fusion cuisine, this is lively on the lips, spicy on the tongue and easy on the stomach.

Above all, Blood is a superb example of freewheeling storytelling, with Sully and Caneze switching between ordinary dialogue and direct address to the audience. They not only play the main characters, but all the others as well. The effect is constantly uplifting, occasionally hilarious and both stylishly poetic and deeply felt. The writing is full of fun and integrity. And so is the production. Esther Richardson directs with great confidence and flair, and gets the best out of Samuel-Bal and Pattani. They make a great contrast: Pattani has the well-bred confident poise of the posh girl who knows her family adores her, while Samuel-Bal has the tentative awkwardness of the boy who was made to stand in a corner at school, and who has been seen as a loser ever since.

Yet both these characters grow visibly on their journey down the path of true love, which we don’t need Shakespeare to tell us is a rocky road. As they discover the need to trust each other, and try to shake off the ambiguous embrace of the family, Samuel-Bal and Pattani reveal an ability to move us as well as amuse us. The central metaphor of flesh and blood is beautifully developed in a production, designed by Sara Perks, that uses a red curtain to symbolise an assault, and which takes the veil seriously. A brilliant piece of new writing. Happy anniversary, Tamasha!