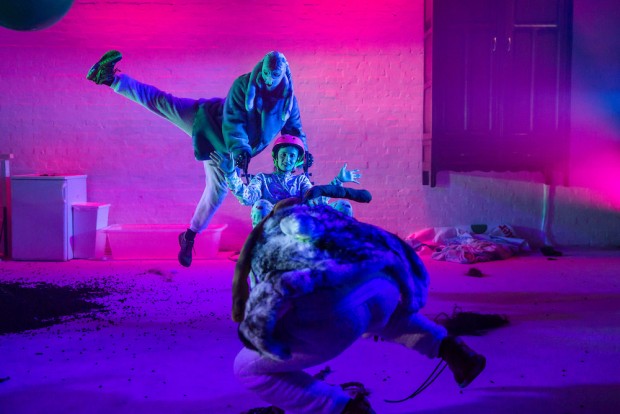 How can you represent trauma in the theatre? Let’s count the ways: the naturalistic way tells a realistic story that is accessible and explanatory; the documentary way shows you the medical and psychological impact of the condition; the symbolic way teases out the implications of the events; and the absurdist way makes the horrific funny as well as disorienting. Then there is the experiential way, a theatrical method that puts you right in the middle of the feelings being felt by the story’s protagonists — and conveys the horror of trauma instinctively and directly. This is the path chosen by Josh Azouz’s Buggy Baby, staged by Ned Bennett and his team at this innovative fringe venue run by Jay Miller.

At first glance this is a simple refugee story. Isolated in a flat somewhere in London, Nur is an 18-year-old single mum with an eight-month-old baby, Aya. She shares the flat with Jaden, an unemployed man in his mid-30s, who looks after her baby when she goes to college each day. Aya has a misshapen head and wears a crimson NHS-prescribed helmet. Jaden and Nur arrived in London a couple of years previously, and she has adapted better than he has. She speaks better English, even trying to improve his language skills, and she is making a success out of college. Both have arrived in England in the back of a lorry and they have memories of a traumatic journey, one which has cost the lives of three companions. Right at the start, Jaden says that their original home “no longer exists”.

But if Nur copes with isolation by being outgoing and participating in the college council, Jaden takes the opposite route. He starts chewing khat, which has the effect of euphoria as well as dampening down the appetite. But it also causes him to get paranoid, and the play itself rapidly flips into a trauma-soaked surreal world in which internalized memories break free of the body and roar around the stage. Things get weird. Bizarre. A wardrobe climbs the wall. Two hallucinated rabbits invade the flat, threatening Jaden and the baby, lights flash and a heater glows with a sinister orange radiation. The baby begins to speak — like an adult. Then things get even weirder. The two rabbits start to threaten them: a suggestion of human trafficking; child abuse. Trauma breeds trauma. Jaden grows a khat bush. Things begin to spiral out of control.

Although its plot is pretty cursory, Azouz’s play powerfully sums up a situation, a state of mind, a set of feelings. The dialogues between Jaden and Nur are the natural stuff of everyday life in adversity. How much help should they ask for from the authorities? How can we cope on such little money? Who should look after the baby? At one point, Nur mischievously suggests that no-mates Jaden should use a dating app; at another, there is resentment about self-sacrifice and going to college. Commenting on all of this is baby Aya, who is small but speaks like a grown up. This delicious device allows us to imagine what it would be like to be a child. She gets hungry and cries; she soils her nappy; she is given a bath; she talks about what she thinks about the situation. And she has a potty mouth.

Aya’s comments inject a welcome vein of humour into what could easily be a depressing tale of refugees living in urban poverty. Appealingly played by Jasmine Jones, Aya has the mannerisms of a baby, the uncoordinated hand gestures, the body rolls, the leg kicks, the splutters and cries. She sticks things in her mouth; she grabs things (at one heart stopping moment a pair of sharp scissors); she tries to climb, to walk. Because the adults are too poor to afford a cot, she has to sleep in a buggy, and in her pajamas and medical helmet she looks vulnerable as well as funny. Jones’s mix of comic timing and direct address to the audience are fab. Really memorable.

Bennett’s production vibrates with violently loud drug-addled moments of traumatic intensity (thanks to designer Max Johns, composer Giles Thomas and lights by Jess Bernberg). These are genuinely shocking and the two crazy rabbits embody paranoid malevolence (they have “black souls”) and keep the sense of sinister possibility (are they pimps?) always alive. Amid the often ironical bursts of Queen’s ‘I Want To Break Free’, and on a bare set dominated by day-glo balloons and an axe which is labelled “In Case of Emergency”, Noda Bentaher (Nur) and Noof McEwan (Jaden) are the still centre of the gathering storm. Amid the madness of the Burnt Fur Rabbit and the Gun Shot Wound Rabbit, they hold out the possibility of human connection even in the worst circumstances.

Although this show says nothing about the politics of the refugee crisis, it does convey a hugely offbeat and leftfield experience of what isolation and mental collapse actually feels like. Its 90-minute running time and quick swaps between normality and bursts of psychosis mean that you never get tired of the theatrical devices used, and instead the audience is reminded of just how safe and unoriginal most other productions are. Although the temptation might be to dismiss this show as an oddity, that would be a mistake. Both the originality of the writing, its rapidity, its mix of the mundane and the surreal, and the explosive excitement of the staging suggest a fertile way forward for British new writing.