Home » Reviews » Only Our Own, Arts Theatre

Only Our Own, Arts Theatre 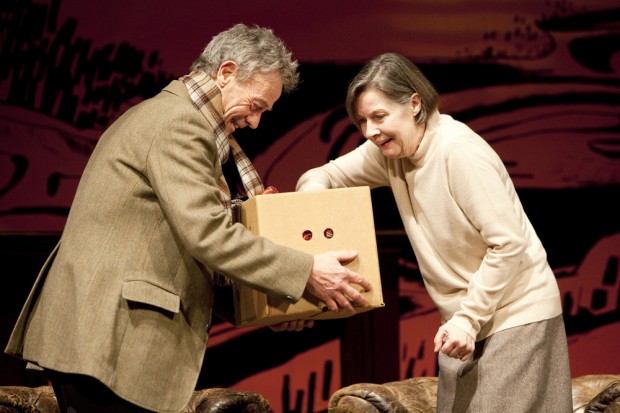 There are few things as depressing as whinge drama. But the Anglo-Irish have a reasonable claim to be considered the Republic of Ireland’s forgotten losers. The term refers to the wealthy Protestant class whose elegant stately homes dotted the landscape during the centuries that the island was a British colony. But during and after the War of Independence, which ended in 1922, they became a target for the Irish Republican Army. This play looks at how the great historic events of the past impact on different generations of one family.

Lady Eliza is the matriarch. She still remembers the night when her ancestral home in Tipperary was attacked and burnt to the ground by the IRA. She was 11 years old. Although she now lives in Connemara with her daughter Meg, son-in-law Andrew and their feisty daughter Titania, she cannot forget or forgive. Then, after Titania gives birth to two children, the question arises of just how much a fresh new generation should be burdened with the troubles of the past.

Ann Henning Jocelyn’s story has an epic quality, sprawling over a quarter of a century and with roots back into the 1920s, and is full of sympathy with a lost way of life. But as an account of intergenerational conflict it is much less interesting than it is as a reading of identity, both national and individual. If it is true that we are where we come from, then the descendants of the Anglo-Irish Protestants must live in an odd no place. Their past is the burnt-out country mansion, a lingering smell and taste of ashes.

For Titania, the birth of her two children — whose father is an Irish Catholic — brings to the surface these issues of class identity. As a mother, she is forced to ask herself who she really is — and to confront the idea that we really can be who we choose to be. Is she limited, like her parents, by her traumatic past, or can she make herself anew? It’s a question that all three — Meg, Andrew and Titania — are obliged to answer.

If the issues contained within this play are still resonant — as shown by the collapse of recent talks about the conflicted past between the two communities in Northern Ireland — the same cannot be said about either the characters or the language of the play. Sadly, Henning Jocelyn has no ear for dialogue, and the rich, ripe life of spoken Irish is entirely missing from this story. The words spoken on stage sound as if they are a clumsy translation. Somebody really should have told her.

When it comes to the characters, at best they are two-dimensional, at worst declamatory mouthpieces for the social and political issues of the story. Under the clumsy direction of Lars Harald Gathe, the play plods on for what seems like twice its two-hour length, with wooden dialogue, cardboard characters and dusty stage images. The acting by the small cast — Maev Alexander (Meg), Cornelius Garrett (Andrew), Alex Gilbert (Titania) and Elaine Montgomerie (Lady Eliza) — is uniformly unconvincing, often lapsing into melodrama with exaggerated facial expressions and stereotypical gestures. Everything is told, little is shown. There are lashings of sentimentality and a gross coincidence at the climax. No, I was wrong, there is something more depressing than whinge drama, and that’s bad drama.