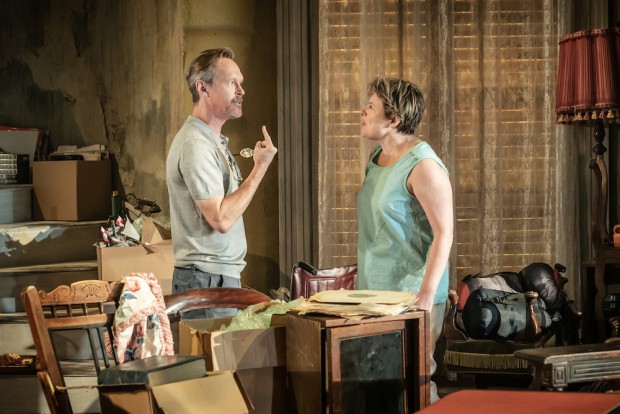 Playwright Branden Jacobs-Jenkins is one of America’s finest. In London, we are now catching up with the catalogue of some of his best work: two years ago, his An Octoroon, which joyfully deconstructs a 19th-century plantation drama by Dion Boucicault, started life at the Orange Tree Theatre and then transferred to the National no less. Then came Gloria, a satire on office life that contains one of the most audacious plot twists in contemporary theatre. Its director was Michael Longhurst, who now runs the Donmar Warehouse, where Jacobs-Jenkins’s Appropriate, appropriately gets its British premiere.

First produced stateside in 2013, Appropriate is a family reunion play and the family doing the reuniting is called Lafayette, a name which evokes the country’s historical links to both France and to slavery. It is set in a derelict Arkansas mansion, the generational home of old Ray Lafayette, who died six months ago, leaving his children to dispose of his debt-ridden estate. His oldest daughter is Toni, her father’s carer during his final illness, who is a potty-mouthed divorcée with a troubled teenage son, Rhys. Her brother is Bo, a New Yorker who is married to Rachael, and this couple have two kids, Cassidy and Ainsley. The youngest brother is Franz, once called Frank, and the bad boy of the family. He arrives with River, his young fiancée.

Each of these family members is vividly characterized, even if Jacobs-Jenkins plays various games with the idea of stereotypical, or maybe archetypal, characters. Toni is a school vice-principal who has been disgraced, Bo is a middle-class media guy and Franz is the typical prodigal son (his entry after a disappearance of many years is via an open window). Rachael is New York Jewish, while River is a mystically-minded New Ager. As with any family drama, the name of the game is old rivalries and hidden secrets. But the catalyst, right at the start, is the discovery of a family photograph album. A set of pictures not of picnics, but of dead black people, victims of lynching.

What is this horrible album doing the house? Does it prove that Ray was a racist? Each family member reacts differently. Toni, for example, is in denial: her father was never a racist. By contrast, Rachael sees them as evidence not only of racism but of anti-Semitism as well, and she wants to use them for educational purposes. Bo eventually wants to make money out of the discovery, while 13-year-old Cassidy simply takes snaps of them on her mobile to send to her friends. River, the most sensitive one, picks up the feeling of this being a haunted house. And she ain’t wrong: it is. In many senses.

Haunting, both actual and metaphorical, is at the heart, or maybe soul, of this play. As an old slave plantation, the family estate has land in which are buried dead slaves, and the discovery of other mementos from the past emphasizes this grim history. But most of the play’s action is not ghostly, but practical: how to make some money from selling the estate, and then how to divide it. In the process, tempers flare and recriminations are flug around. Yet the sense of haunting is theatrical too: Jacobs-Jenkins’s play is full of consciously muted echoes of other family dramas, by Eugene O’Neill, Tennessee Williams, Lorraine Hansberry, Arthur Miller, Sam Shepard and Tracy Letts.

Jacobs-Jenkins cleverly sets up the possibility of hope for the damaged members of this white family, who live in a land whose history is soaked in the blood of slavery. Then, like an adjudicating angel, he denies each of them the forgiveness and understanding they crave. You could say that this is one black playwright’s revenge on a theatre genre that has often ignored the black experience. Instead, he offers a sobering picture of the way racism is handed down the generations, and also how psychological damage is also inherited. In the end, he suggests, family is an illusion, just a bunch of mismatched memories, and this seems utterly appropriate.

Ola Ince’s terrific production, with a stupendously cluttered set by Fly Davis, begins with evocative torch beams and features stand-out performances by Monica Dolan (Toni), whose tongue is as sharp as a viper’s venom, and Steven Mackintosh (Bo), so offhand until he cracks. As Franz the black sheep, Edward Hogg is convincingly agitated. On the other side of the emotional scale, Jaimi Barbakoff gives Rachael a dignified respectability, while Tafline Steen brings River’s sweetness and sensitivity to the fore. Good work also from Charles Furness (Rhys) and Isabella Pappas (Cassidy). The atmosphere of the evening is further enhanced by Donato Wharton’s soundscape, in which the cicadas sound menacingly like rattlesnakes, and Anna Watson’s lighting, which gives an eldritch quality to some scenes. What stays with you is Jacobs-Jenkins’s exuberant cruelty and transgressive wit in this wild and entertaining, if a bit depressing, deconstruction of the great American family drama.