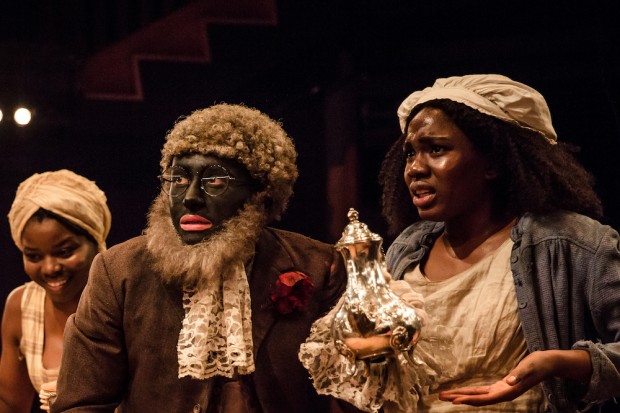 This is phenomenal. And pretty wild. Branden Jacobs-Jenkins’s An Octoroon is the most intelligent and most theatre-savvy play on today’s London stage: it is a satire on staging race, an account of black identity, a criticism of plantation life, a celebration of genre fun and a tribute to a forgotten work from the Victorian era. It is also one of the most happily demented works you’re ever likely to experience. Basically, it’s brilliant. And so first of all thanks to Paul Miller and the Orange Tree Theatre for bringing over this 2014 New York Obie-award-winning hit, and giving it its European premiere.

An African American playwright, Jacobs-Jenkins has taken Irish actor and playwright Dion Boucicault’s The Octoroon, first staged in New York in 1859, and deconstructed this tragic antebellum melodrama. As in the original, the setting is the vast Terrebonne estate, a plantation in Louisiana near the winding Mississippi River. While the Peyton family’s aunt lies dying, Jacob M’Closky — a local businessman — plans to buy the estate, which is heavily indebted. But help is at hand: George Peyton, who will inherit Terrebonne, returns from a trip to Paris and is ready to do anything to save the old place.

But George has his work cut out. Although he is attracted to young Zoe, an Octoroon (meaning one-eighth black, having had one black great-grandparent) and the illegitimate daughter of his uncle, she cannot marry him because of the rigid race laws that prevent so-called miscegenation. At the same time, George is being pursued by Dora Sunnyside, a local heiress whose immense wealth can save the estate. Further complications arise with the servants, slaves and hangers on: house slaves Dido and Minnie, venerable old slave Pete, wild boy Paul, and Wahnotee, a Native American. Oh, and who’s this? Surely it’s Br’er Rabbit — what’s this anti-authoritarian trickster doing here?

Jacobs-Jenkins takes apart this barnstorming melodrama first by introducing “the black playwright”, i.e. himself, a black actor who whitens his face in order to play both George and M’Closky. He talks humorously about the stereotyping that most actors of colour experience, and how it’s hard to find white actors to play out-and-out racists. He is then joined by a white actor, who plays Boucicault, and who puts on red make-up, ready to play Wahnotee, and later a character who gets sunburnt. Another actor blacks up to play a handful of roles. As in Caryl Churchill’s Cloud Nine, this racial mixing is a powerful reminder that while some aspects of race are inherited, others are performed.

The play begins with the arrival of George, but Jacobs-Jenkins — a bit like Tom Stoppard in Rosencrantz and Guildenstern Are Dead — focuses his attention on the slaves behind the scenes. We see some of the action through the eyes of Dido and Minnie, and their acquaintance Grace, a field worker. They speak a language that is contemporary American, with occasional mashed up bits of plantation-speak and parodies of stage mannies. The parodic elements also inflect the character of Dora Sunnyside, whose monstrous vanity and Southern Belle mannerisms are hilarious from the start.

As the love triangle between the noble George, the lovely Zoe and the increasingly desperate Dora, and then M’Closky (who wants to buy Zoe as well as the plantation) proceeds, Jacobs-Jenkins offers plenty of asides that comment not only on the racial politics of the Old South, reminding us that the American original ended with Zoe’s tragic death, but also deconstructing the theatrical form of sensational Victorian melodramas. The relationship between plot (Zoe and the fate of Terrebonne) and subplot (the murder of poor Paul by villainous M’Closky) is clarified and the choice of special effects (burning Mississippi river boat) is discussed.

With its brilliantly written exchanges between black women, which show the rivalries as well as companionship of a suppressed class, race and gender, its highly intelligent understanding of the mechanics of theatrical plotting and its acute sensitivity to issues about the representation of black people on stage, An Octoroon is a fabulously enjoyable and humane piece of drama. As directed by Ned Bennett, and designed by Georgia Lowe, it is an evening of intellectual stimulus, savage satire and highly entertaining spoofs. An ensemble cast, led by the energy-bomb Ken Nwosu as George/M’Closky, includes equally outstanding performances by Celeste Dodwell (Dora), Iola Evans (Zoe), Alistair Toovey (Pete), Emmanuella Cole (Dido) and Vivian Oparah (Minnie). Some nicely arch cello playing too from James Douglas.

An Octoroon is pretty crazy. Really. As it questions uncomfortable views about race and identity, with unspeakable moments of overt racial prejudice and the underlying brutality of slavery, the cast power through increasingly chaotic scenes, with house lights going up unexpectedly, the theatre floor being taken up, sudden appearances from the gallery; a rabbit tap dances, money is flung in the air, and most shockingly, an image of a 1920s lynching is projected. Occasionally, the deliberately messy production is a touch tiresome, but generally the anarchy on stage matches the ideas of the play perfectly, and the evening is really great fun while also being an intellectual and moral challenge.