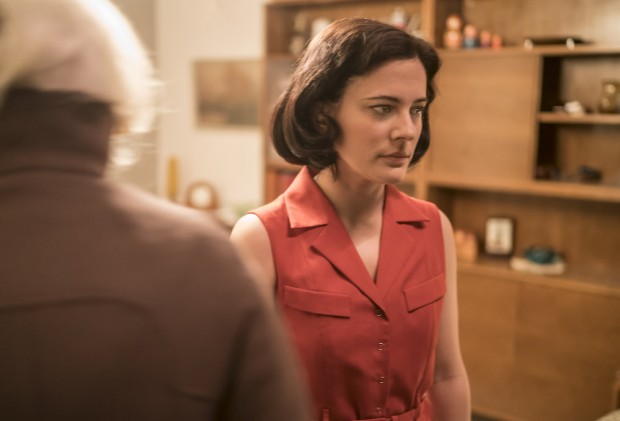 Stasiland is a fascinating mental space. As a historical location, the former East Germany, or GDR, is the archetypal surveillance state, in which each citizen, even if they are an intellectual dissident, spies on each other citizen. The Communist state acts like Big Brother, keeping tabs on everyone. This was memorably invoked by Florian Henckel von Donnersmarck in his 2006 film debut, The Lives of Others. Now the National Theatre pays a similar visit to this unhappy place, with an intriguing play by Ella Hickson, which is given a thoroughly immersive production by Natalie Abrahami, using individual audience headsets to create a disturbing sense of intimacy.

Dateline: 1968. Location: East Berlin. As we take our seats, we are given individual headsets which enable us to follow the action on stage, which is screened off from us by a glass partition. So at first we watch thirtysomethings Hans and Anna Weber in their home, apartment P2, in Leninplatz. They appear to be model citizens in the socialist state, and they are about to host a party to celebrate his promotion to the post of Section Manager. Among the guests are Fred, Anna’s best female friend; their older work colleagues, Dieter and Marion Bourmer; Karl Wolf, an ex-sports star, and secretary Sophie. In addition, there is Elena Hillenbrand, a less-than-welcome guest whose husband has been disappeared. When Hans’s boss, Christian Neumann, arrives, Anna reacts with shock.

Why? Because Neumann reminds her of Max Becker, a childhood friend who violently betrayed her trust at the end of the Second World War. It’s a plot twist reminiscent of Ariel Dorfman’s 1991 play, Death and the Maiden, and the question of whether she is right or mistaken fuels the story. Because of the headphones, we experience all this from Anna’s subjective point of view: what she hears, we hear. When she leaves the room to go to the offstage bathroom, we can hear her movements but not the words of the characters that we see in front of us. Although the action is still clear, the headphones produce a feeling of voyeurism and complicity, making us feel like Stasi eavesdroppers, which is thematically true to the story.

As the piece’s palindromic title makes clear, this is a world of mirrors, an apt metaphor for the GDR: while normal life is conformist and conventional, the private thoughts of citizens can be dissident and resistant. For every gesture of obedience, there is a subversive idea surfacing in the mind. After all, what is real and what is imaginary? What is solid and what a reflected image? If official utterances are all lies, what is truth? Hickson takes this metaphor even further by applying it, very clearly, to her storytelling. So appearances in this world of mirrors are deliberately deceptive and when the truth finally comes out, it is genuinely surprising.

In parallel to this picture of the GDR is a portrait of a marriage. Hans and Anna appear at first to be a happy couple, but quite soon it emerges that she has not told him everything about her past life, before she met him. Just as the Communist state depends on the repetition of ideological fantasies, untruths if you like, so the marriage of Hans and Anna is also based, we think, on lies. On the repetition of falsehoods. Or is it? Who, Hickson encourages us to think, is actually fooling who? Who is loyal to the state, and who isn’t? Who is loyal to their spouse, and who isn’t? Yes, this is a short thriller which moves through a long corridor of mirrors.

But if the thriller aspects of ANNA are definitely effective, the same cannot be said of its sense of history. Although the playtext claims that the furniture and sounds of the play are completely authentic (evoking “the sound of Communism”), this confident assertion is belied by much of the writing. Most of the dialogue has an unmistakable contemporary English ring, and the exchanges have scarcely a trace of East Germany in either tone or content. This sense of anachronism, in which 1960s people talk about gender as if they are part of the #MeToo generation, fatally undermines much of the situation’s credibility. The way everyone behaves on stage is just all wrong — and all it’s the fault of the script.

There are also some other problems: like an episode of the BBC’s Inside No 9, the play roars through some amazing plot reversals in a mere 70 minutes. Although we are focused on Anna’s tense subjective experiences, and almost feel the whispered words in her ears, this works as a shortcut to her being a fully rounded character. As for the other people in her life: they remain ciphers. All this lowers the stakes and makes the thriller less, er, thrilling. On top of that, much of the storytelling is wildly improbable, with mind-boggling coincidences that really strain credulity. It’s also one of those stories which, when you know the ending, you really never need to watch again. And knowing all this undermines much of my enjoyment of the play.

The use of headphones to evoke the surveillance state, with some definite contemporary parallels with the digital world, is a powerfully original concept, although a variation of it was used by director Sasha Wares and designer Miriam Buether in Mike Bartlett’s similarly immersive Game at the Almeida in 2015. Likewise, the soundscape of Ben and Max Ringham reminds me of some of director Katie Mitchell’s more literal-minded work. Still, Abrahami’s meticulous production on Vicki Mortimer’s accurately retro GDR set tells the story with great economy, and Phoebe Fox’s performance as Anna is engrossing. She is well supported by Paul Bazely (Hans), Max Bennett (Christian) and Lara Rossi (Fred). If you don’t care about historical anachronisms, about verbal tone, this staging will delight — if you do, your pleasure might be compromised.