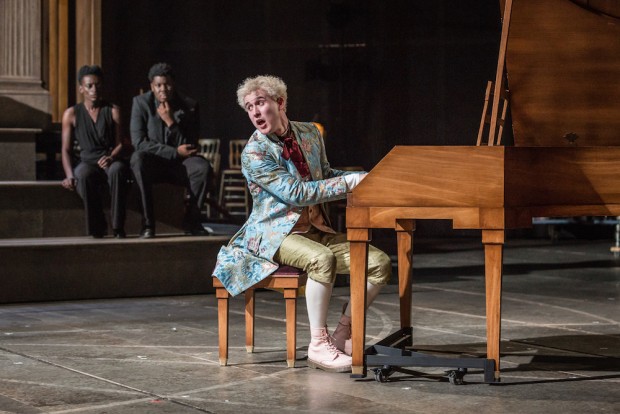 Populist playwright Peter Shaffer, who died in June, gets a rapid honour from this flagship venue, which — aptly enough — is putting on his most popular play. So popular in fact that it has already sold out and is therefore critic-proof. But somehow that doesn’t put me off. Directed by one of our best youngish directors, Michael Longhurst, and with live music by the Southbank Sinfonia, this spectacular show is certainly a hugely entertaining evening. But is this story of the genius Wolfgang Amadeus Mozart and his saturnine rival Antonio Salieri the best play ever about a composer, or merely a way of flattering the prejudices of the audience?

Originally staged at the National in 1979, Amadeus starts with Salieri as a very old man, on the verge of death and taking the audience into his confidence. The action then jumps back to Vienna in 1781, a time when imperial court composer Salieri is enchanted by the heavenly beauty of Mozart’s compositions. But when he meets the musical wonderboy, he is disappointed to discover that Mozart is completely different to what he expected. Instead of being elegant and sophisticated, he is a brat, with a potty mouth and vulgar clothes. Being a devout Catholic, Salieri struggles to reconcile Mozart’s boorish behaviour with his God-given genius. So he renounces God and vows to destroy Mozart as revenge against the Creator.

The extreme differences between the two characters is typical of Shaffer’s use of binary opposites to dramatise a subject, in this case genius and creativity. For while Salieri works hard and cultivates his contacts, all he can achieve is to turn legends into ordinary music; Mozart, on the other hand, behaves terribly, but turns ordinary events into legendary music. If creativity is a gift from God, then Salieri has not been favoured — despite his firm belief in the deity. And he cannot believe how effortless is the flow of music from his rival. So he decides to destroy his Mozart’s career.

Shaffer’s play cannot be accused of being sophisticated, nor particularly well-written. His vision of bad-boy Mozart is exaggerated and caricatured, and the women in the story — Mozart’s wife Constanze and Salieri’s mistress Katherina Cavalieri — are only given walk-on parts. Once the playwright has established the opposition between genius and mediocrity, between the lust for life and jealous vengefulness, all he can do is repeat this over and over and over again. For more than three hours! It’s the worst kind of 1970s playwriting: verbose, didactic and repetitive. Viewed dispassionately, it also flatters the audience into thinking that it’s saying something profound when actually its main message is banal and simplistic.

What saves Longhurst’s production is Mozart’s music. He has chosen to saturate the story with glorious sound, played on stage by the Southbank Sinfonia, who also act in the crowd scenes and in the glorious nights at the opera. Lavishly designed by Chloe Lamford, this is a show that both delights and moves you with constant reminders that there is a difference between genius and also-rans, however talented. On the huge Olivier stage, this Amadeus pulses and shimmers and trills and occasionally roars with the pleasure of great music. It’s bursting with glory! At some moments it is almost overwhelming; at others it is quietly moving.

As Salieri, who dominates the play, Longhurst has cast Lucian Msamati, an actor who has immense stage presence and a powerful dignity. The minute he appears, I just knew that he could carry the show. When he confides in you, you listen, almost mesmerized. Even when speaking the most obvious dialogue he raises the stakes, giving a high, almost tragic, seriousness to the silliest words. When, towards the end, he mentions slavery, the fact that he is a black man gives this line an extra depth. And although it might at first seem questionable to cast a person of his ethnicity as the devil character, thus not challenging a whole tradition of prejudice, Msamati brilliantly leads us through the evening. His Iago-like relationship with Mozart is further complicated by the fact that the actor played Iago at the National some years back.

I was less impressed by Adam Gillen’s Mozart, the noisy and scatological enfant terrible. Although he has a great deal of entertaining energy, his performance is all of one note. As Constanze, Karla Crome is funky and sympathetic, while soprano Fleur de Bray is in fine voice as Cavalieri. Of the dozens of other actors, it’s worth mentioning Tom Edden, whose Emperor Joseph II has an appealingly dry wit. The whole cast and ensemble inject a terrific energy into the big set pieces (parties, operas, concert scenes) that make this a highly memorable evening distinguished more by its glorious music and overblown staging than by its words.