Home » Reviews » A Kettle of Fish, The Yard Theatre

A Kettle of Fish, The Yard Theatre 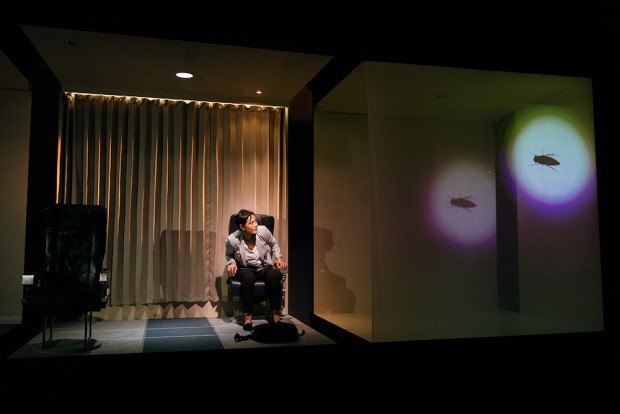 Ah. Fear of flying. Yes, this is instantly recognizable: that sense that being propelled through the air in the company of many strangers at high velocity is profoundly unnatural. There’s something so wrong, something so uncanny, something so scary about the whole idea of air travel. Basically, flying sucks. Every time I have to do it, I can’t help but think that humans were really not made for steel-clad aerial life. This feeling, this emotional palette, is at the centre of Brad Birch’s excellent 70-minute monologue about a female professional and her response to a critical convergence of problems. And the play is delivered in a wonderfully attractive production that is visually and aurally engrossing.

Lisa Collins is a young businesswoman, a data analyst whose aged father has recently moved in with her. Her company is transferring some of its activity to Eastern Europe, and the plan is for some of the staff not only to visit this country, but to eventually live there and supervise the progress of this project. So, along with her colleagues Brian and Hannah, Lisa boards a flight. Nothing unusual so far. Just the banal petty miseries of queuing, of security, of settling down in your seat. Listening to the crew giving their presentation of the usual safety instructions. The plane takes off. The normal stuff: a baby crying, a poor choice of refreshment, a queue for the loo. Then something alarming happens. One of the cabin crew asks Lisa to leave her seat and come with her. She has something confidential to tell her: there’s an emergency affecting her home back in England.

Poor Lisa. It’s one of those nightmares, like falling ill on a flight, when your ability to act, to do anything, to exercise agency, is severely limited. Lisa wants to make a phone call. The cabin crew say they will ask the pilot. She returns to her seat. Internal turmoil. What can she do? When Brian and Hannah ask her what the problem is, she doesn’t want to share her private troubles with her professional colleagues. So understandable. So she palms them off with an excuse. But the intensity of her emotions — fear, anxiety and a cascade of wild imaginings — pour through her mind and body. Fear grips her soul. Panic and grief. Externally she is normal; inside, stricken. Her mind is on fire.

For theatre, it’s always a challenge to get audience members inside the head of a character. Caitlin McLeod’s beautiful looking and beautifully paced production tackles this head on by equipping each audience member with a set of headphones. A great idea for this play. When the show starts, the soundscape and mundane background noises make themselves felt right between your ears, and the effect of being separate from your fellow audience members and hearing their reactions, movements or laughter, muffled by the headphones is both a realistic approximation to the ear-numbing effects of flying and also gives a symbolic sense of Lisa’s alienation from her work colleagues and her uncertainties about her role in life.

Like Albert Camus’s The Outsider, A Kettle of Fish is a study in alienation, an account of a radical separateness in the world. At first the title seems to be not literal, but suggestive: the phrase “a different kettle of fish” means “a different thing altogether”, or something different from the thing before. In Lisa’s case, it implies that having her aged father stay with her permanently is a less good prospect than just looking after him for a weekend; or having to move to Eastern Europe is radically different from just doing a study visit. Or a site visit. But, hold on, the literal meaning of “a kettle of fish” is a mess or a muddle. An awkward situation. And that is an excellent description of what happens to Lisa.

Birch’s writing is thoroughly empathetic, its taut phrases speeding at you with tight-lipped precision and alarming swerves. He effortlessly conjures up the mundane everyday details of the contemporary corporation, of the home and the tube and the airport, and slowly develops Lisa’s sense of unease as her flight takes off. It’s excellent subjective writing, both observant and relatable, occasionally hallucinatory in its detail, and the monologue opens up a world of uncertain, messy, emotions: as well as the fear of flying there’s a strong sense of anxiety about the care of aged family members (what if a parent develops dementia?); ambiguous feelings about one’s co-workers; and most devastatingly the experiential unsureness about our sense of self. What happens to us when we lose everything?

McLeod’s brilliant high-definition production is strikingly designed by Ingrid Hu, with great support from Joshua Gadsby’s lighting and Max Pappenheim’s sound. Of the three claustrophobically airless cubes of the staging, one is a dream place of pure feeling, in which appear Tegid Cartwright’s evocative videos, of a fly that distracts Lisa’s attention, of Hannah’s be-ringed hands, or of a Beckettian mouth close up (reminiscent of Not I, another example of mental collapse). The other two cubes, showing Lisa’s living room and the plane, are suffused with lighting effects as the story unfolds. In this uncanny no-place of severe psychological distress, Wendy Kweh convincingly plays Lisa with enormous control and a clear sense of a person about to step into an emotional abyss. She makes us feel the terror of hearing bad news at 30,000 feet, while our feet stay firmly on the ground. Thank fuck for that. And for this short, but very intense, exploration of inner space.