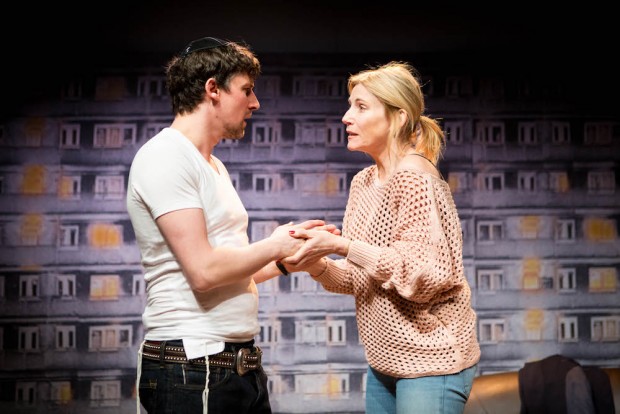 Michelle Collins, actor and TV presenter, is so strongly associated with her roles in EastEnders and Coronation Street that it is something of a shock to see her live on stage at the Park Theatre, and not behind a bar or in a snug. And although she has always had an energetic versatility, she’s been most comfortable as a chatty Cockney, a quality that Stewart Permutt says attracted him to writing the part of Gina in his engaging new two-hander, A Dark Night in Dalston, specially for her.

Set, unsurprisingly, in East London, the story starts as an odd-couple encounter. Gina (Collins), a 49-year-old ex-nurse lives on a rough council estate and looks after her older husband Billy, who is bed-ridden after a stroke. One Friday evening, Gideon — a young, observant Jewish accountant from Stanmore — is attacked by racists outside her flat. Dizzy from the blows, he accepts her Good Samaritan invitation to rest in her living room. Disorientated from the attack, Gideon doesn’t notice that night has fallen and, as the Sabbath begins, he explains to her that he cannot travel by any form of transport. The warm-hearted Gina offers to let him spend the night on her sofa.

Over about 95 minutes we discover much more about these two characters. Gina is a gobby, slightly spiky individual whose loud exterior hides a more nuanced inner life, a troubled world in which her husband drains all of her energies and her estranged daughter Toni won’t speak to her. But despite the abrasive aspects of her character, she’s tolerant and familiar with Gideon’s religious observance, a legacy of the area’s once thriving Jewish community. By contrast, Gideon is meek and mild, a daddy’s boy who is meticulous in his faith: he can only drink from a paper cup, and his joy in discovering that his host has Kingsmill bread and Walkers crisps (both kosher) — and memorably made into a sandwich by Gina — is one of the rich seam of comic moments that Permutt includes in the drama.

At its very best, A Dark Night in Dalston is a bleakly humorous and touching account of two people who are longing to make human contact. Both are damaged; both almost suicidal with loneliness. Both have to hide the secrets of their true selves. Both are drawn to each other because of their desperation. When they dance together, their awkwardness speaks volumes. Although Tim Stark’s production, designed by Simon Daw, is a bit clunky in some of its stagecraft, his cast — not only Collins, but also Joe Coen — convincingly explore the darkness at the centre of Permutt’s play. If the text starts to meander a bit before the final revelation, the ending is sufficiently powerful to justify the wait.

Permutt not only paints a perceptive picture of two very needy individuals, but also sketches in a series of social issues: the plight of women who are carers for their husbands; the claustrophobia of religious communities; the compensatory appeal of cultural obsessions (Gideon loves film noir); the abuse of pain killers and prescription drugs; the inadequacy of belief (Gina used to be a Catholic); oppressive ideas about masculinity and equally entrapping images of womanhood; the force of sexual attraction as a refuge from personal distress. As a result, the play is sometimes a mother-and-son story, and sometimes more like a news report. Yet there is no doubting its integrity. This is a troubling, sporadically funny, but densely written and deeply felt new play.