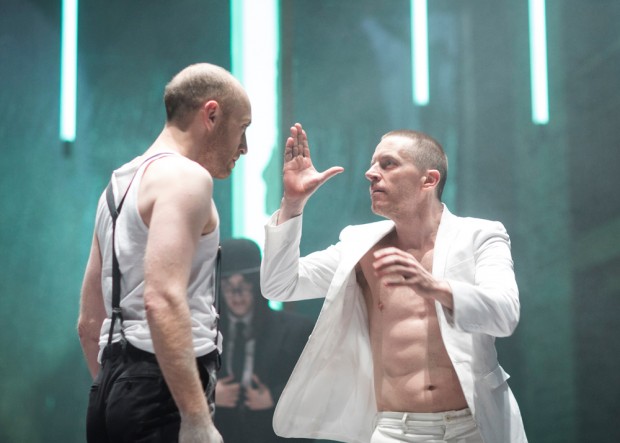 The Faust myth is one of the most fascinating in Western culture, but Christopher Marlowe’s take on it has some well-known problems. His staging of the story was published after his death in two versions which both had substantial additions by other playwrights and theatre-makers. As a result, perhaps, the narrative notoriously tends to sag in the middle, and the tight tale of a pact with the devil that enables the scholarly Faustus to exalt in unlimited power for 24 years before being plunged into eternal damnation tends drag.

Earlier this year, Jamie Lloyd’s West End version contained additional text by Colin Teevan, and reimagined the story by substituting celebrity for religion. By contrast, this current version, directed by Maria Aberg for the Royal Shakespeare Company, trims the text radically to get a running time of about 105 minutes, and substitutes psychology for theology. I have to say that, having despaired of ever seeing this play achieving the stage impact that its content deserves, I was delighted to see that Aberg’s reading of the text is psychologically compelling, visually bright and emotionally true.

The evening starts with two actors, Sandy Grierson and Oliver Ryan, dressed in black suits and facing off on stage. They both strike a match and watch them burn. Ryan’s goes out first so he gets the role of Faustus, while Grierson is Mephistophilis tonight. They part and the show begins. On designer Naomi Dawson’s simple but effective set, littered with boxes of books, the philosopher Faustus proclaims the fact that he has mastered all of human knowledge, and that he desires to understand more. He longs for all the secrets of the entire universe. To reach this goal, he must probe forbidden knowledge, namely necromancy. Having conjured up Mephistophilis he strikes a bargain with Lucifer which will give him 24 years of absolute power in exchange for his soul. He is then able to indulge all of his tastes, for sex, for food, for riches and for power. With the ability to become invisible, he can with impunity visit the Pope and the Emperor, and play tricks on them. He can do anything he wants to. But finally his allotted time is over, and he must face the fires of hell.

Aberg’s version has filleted out many of the short scenes of Faustus’s travels and adventures, and the pace of her production never flags. With thrilling music by Orlando Gough, the set pieces are fresh and exciting. I loved the entry of the Seven Deadly Sins, dressed like a parody of an Alexander McQueen fashion show, with Lucifer played by a woman (Eleanor Wyld) in a white power-suit. The atmosphere of gender fluidity feels very contemporary, and the good and bad angels are visually striking. Everyone looks like sinister versions of the trendy folk you might meet in a metropolitan bar. And casting an older actor (Nicholas Lumley) to play Wagner, Faustus’s servant, gives gravitas to his cautions.

The fun and games of Faustus’s appearances, or disappearances, among prelates and aristocrats lead to the ending, and the best scene of Aberg’s production: the arrival of Helen of Troy (Jade Croot). Her breathtaking youth and the increasingly wild dance that Ryan’s Faustus throws himself into, which ends with a frenzy that is both exhilarating and shocking, is the highpoint of the evening. Aberg gives his lines about the “face that launched a thousand ships” to Mephistophilis, which makes perfect sense, and this whole episode conveys the sense of a crisis in masculinity, aided by the feeling that Helen is underaged. The forbidden desires of the Renaissance find a savagely contemporary resonance.

It has to be said that Ryan’s Faustus has almost no scholarly features at all, so he is anything but poetic in his delivery. By contrast, Grierson’s tempter is soft-spoken, angular and controlling. Although neither actor is concerned with theology, it is only at the very end that the idea that both are doubles of one man comes most forcefully into play. In this study of male psychology, Faustus is everyman, greedy for more power and more experience, striping off the clothes of normality to adventure onto censored shores. By the end, his despair and his agonised masculinity are immensely moving, so much so that I could easily forgive some of the things I didn’t really like about the production, mainly the devil chorus which is dressed in a clichéd vaudeville style. But all is all this is a fabulously successful reading of a difficult play that restores a feeling of excitement and joy in transgression to what is often a lame trot around the bounds of hell.