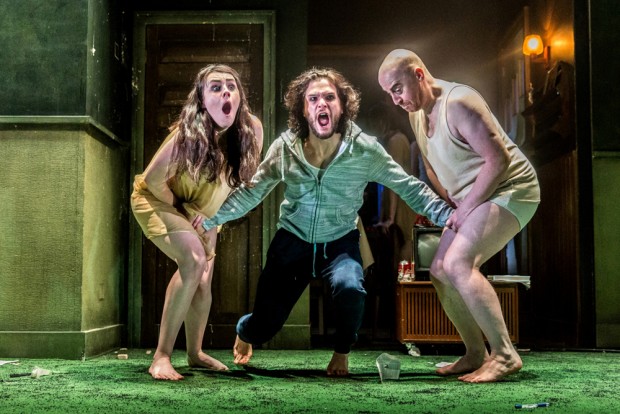 At the moment, the latest two saviours of London’s West End are Kenneth Branagh and Jamie Lloyd. Both lead companies that have excited audiences and critics with their fresh approach to classic plays, and revivals. On Saturday, which was the 400th anniversary of the death of William Shakespeare, I felt a little bit like a heretic because instead of seeing one of his plays I was watching Doctor Faustus, the big hit of his arch rival, Christopher Marlowe. As directed by Jamie Lloyd, it was exactly as I’d expected: a lot of surface flash and dash, but very little emotional depth.

The problems start with the playwriting. Instead of staging Marlowe’s The Tragical History of the Life and Death of Doctor Faustus — which first saw the redemptive light of day in about 1592 — Lloyd has decided to use playwright Colin Teevan’s 2013 West Yorkshire Playhouse version, with its radical cuts and additional contemporary scenes. Now there’s absolutely nothing wrong with doing this. I have always argued that we need to modernise the work of the Elizabethans to make it clearer and stronger — after all, most of the printed texts from those times were pirate copies so there’s absolutely nothing sacred about them. But it does depend on how you modernise them.

In the case of Teevan’s Doctor Faustus I find it mystifying that it opens with passages from Marlowe’s original in which Faustus, a scholar with a lust for knowledge, talks about himself in the third person and lists the various academic disciplines he has mastered. If ever there was a scene that needed rewriting it is this one! But it’s left more or less in its original form — to the obvious bewilderment of this revival’s young audience. And then there’s the “contemporary” scenes that Teevan has added. Oh dear. These are more about rock music and celebrity than Faust’s original desire for power through knowledge, but never mind. That’s forgivable, at a pinch. Less forgivable is the sheer banality of the writing. Honestly, Teevan makes Simon Stephens’s Birdland seem like a work of genius!

Then there is the directing and the acting. Lloyd has set the play more or less in the present day, although all the pop culture references hark back at least 40 years! You know, Jimi Hendrix, Marilyn Monroe, bluesman Robert Johnson… Note to the director: if you’re going to reach out to the youth why not mention the things they like and know about? As Faustus — played by Game of Thrones superstar Kit Harington (Jon Snow) — and his live-in friend Wagner, first conjure up Mephistopheles and then sign a pact with the devil Lucifer, the lurid production begins to stir in the glow of an Apple laptop. As a rock star magician, our diabolical Faustus headlines Vegas (where else?), meets Pope Francis and summons up Abe Lincoln for Obama. He gets involved in the War on Terror, and attacks those who are uncharitable, such as bankers and media moguls.

At first, Lloyd captures my interest with his casting. Wagner is played by Jade Anouka, who is a young black woman, and Mephistopheles by Jenna Russell, who is also female. I have high hopes that they will add something extra to these characters. And some of the visual tricks of the first half an hour have a distinct appeal: the witches sabbath howls into life as Lucifer arrives and there are some vivid light changes and neat touches: someone talks about burning down a village, and a small fire is lit in an ice bucket. The passages about the Seven Deadly Sins are great fun. There’s a funny joke about Hello! magazine and another one about David Cameron.

But although I like some moments of this production, this is balanced by all the stuff I really dislike. I’m not against vomiting on stage, but why do so many of the cast have to vomit here? And so often? I don’t mind one crotch grab during a show, but here it happens some five times! There are arse jokes (and Harington reveals all!) and toilet jokes, and the unremitting vulgarity of this populist attempt to appeal to a young audience depresses me. I find it patronising and cynical.

Worse, the in-yer-face sex and violence of the ending obscures the pathos of Marlowe’s play, and Harington can neither speak the verse clearly nor convey a real human feeling in a touching way. As Mephistopheles, Jenna Russell fails to convey her character’s seductive charisma and her shamelessly ironic rendition of Meat Loaf’s “Bat Out of Hell” had me cringing in my seat. Jade Anouka’s Wagner is generally okay, but some of the best performances came from the smaller parts: I think Forbes Masson’s Lucifer and Tom Edden’s Good Angel were very watchable, and Soutra Gilmour’s sliding-room set is almost a star in its own right. I’m sure that Harington’s name alone will attract young audiences to this ghastly, shameless and gross show, but I’m really not convinced that they are getting their hard-earned money’s worth.