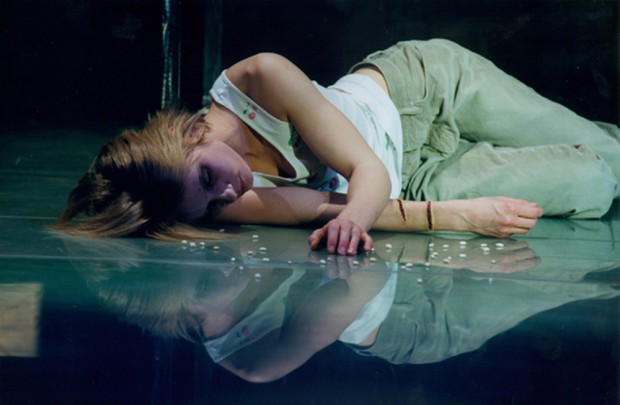 Sarah Kane’s last play is the stuff of legend. Since its first production some 18 months after her suicide in 1999, it’s become a favourite with black-attired drama students, nostalgic in-yer-face theatre buffs and mainstream venues all over Continental Europe. But it is rarely performed in big spaces in this country — apparently because artistic directors feel it would empty their venues. So this version, directed by Grzegorz Jarzyna of Poland’s TR Warszawa on the Barbican’s main stage, is a good chance to see what we’ve been missing. Or is it?

Okay, it’s not the easiest play to watch. As the title suggests, it’s a dramatisation of the experience of mental breakdown and it’s written in a fragmentary and fractured form that is as far from the usual naturalistic fare of this country’s theatre as London is from, well, Warsaw. Kane’s text is very readable, but it sprawls across the page like a modernist poem and all the usual markers of drama are missing: there are no characters, no settings, no stage directions, no plot. Every line can be spoken by either a man or a woman, but it’s up to the director to decide who says what.

In fact, the text’s “bewildered fragments” comprise short passages of fine writing, internal monologues, diary entries, dialogues between patient and doctor, examples of medical questionnaires, excerpts from self-help books, and religious visions. But all is not as bleak as it sounds: jokes jostle with despair; scepticism cohabits with belief. Admittedly, some of the text has a juvenile feel to it, even when it explores the sensibility of an agonised self-consciousness: “It is myself I have never met, whose face is pasted on the underside of my mind.” You see what I mean? And audiences surely don’t need reminding that the best theatre action takes place inside their heads.

Except that, in this production, it doesn’t. Instead of embracing the jagged modernism of Kane’s text, Jarzyna has boldly rewritten the play and imposed his own story onto it. This is director’s theatre par excellence. So in place of the variety of voices of Kane’s original, what we get here is a doomed lesbian love affair, gloating male doctors and a series of suicide attempts that are often risibly overacted, but never tragic. By giving the female actors most of the passages of self-loathing, Jarzyna creates a picture of female depression that strongly suggests the biographical — yes, we know that Kane suffered from depression, but isn’t this autobiographical notion a very limited reading of a potentially rich text?

Oddly enough, this Polish company seems to be more literal-minded than their British counterparts, a reversal of expectations that does the play no favours. The urge to make sense of an allusive text has led them all up the blind alley of banality; you long to shout that there is simply no need to explain the play in this literal way! But the real disappointment is the acting: as if consumed by Euro-angst, the women all shout, scream and rave. They display their scars. They behave like hysterics. It’s like being locked in a parody of a 19th-century asylum. By contrast, the men grunt and baa like stage villains from the same era. There’s explicit sex, nudity and plenty of resentment and recrimination — but you don’t believe a word of it.

On the plus side, some of the stage pictures are memorable, especially when the actors are still. On a punishingly cold, hard surface, surgically green and grey, the actors often find themselves seated in opposing pairs or crossing the space at a diagonal angle. On this clinical background, there are splashes of colour, especially in the costumes: red or orange, or, in one overwrought episode, splashes of crimson blood. With its doomy music, and evocative lighting, this 60-minute production is also well paced and ends in a desolate and deliberately anti-climatic semi-darkness.

My favourite bits were the quiet ones: when actor Magdalena Cielecka sits with her head in her hands, mourning the loss of love, or plays with pills that scatter all over the stage; or even the loud bit when a fountain of lit-up numbers is projected over the figures of the cast, blotting them out in a waterfall of light. As well as Cielecka, the rest of the cast includes Katarzyna Herman, Mariusz Benoit, Rafal Mackowiak and Janusz Chabior. But the substitution of vulgar excess and sheer hysteria for Kane’s irony and bleak humour is the key tone of the evening, and makes this one of the least moving productions that I have seen for a long time. It’s just so loveless, so inhuman. It’s 4.48 Psychosis alright, but it’s Jarzyna’s rewrite — and I prefer Kane’s original.