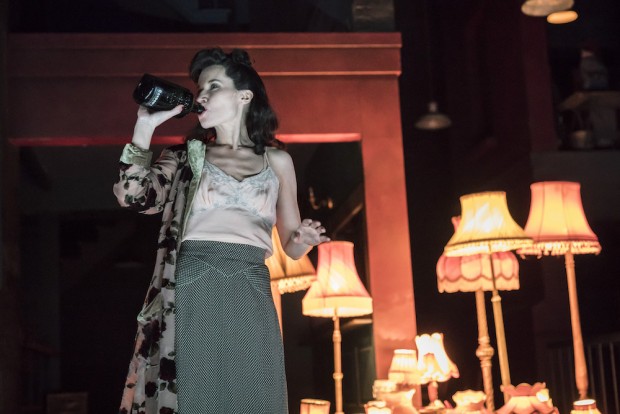 Rodney Ackland must be the most well-known forgotten man in postwar British theatre. His legend goes like this: Absolute Hell was originally titled The Pink Room, and first staged in 1952 at the Lyric Hammersmith, where it got a critical mauling. The Sunday Times’s Harold Hobson said that the audience “had the impression of being present, if not at the death of talent, at least at its very serious illness”. Hurt by such criticism, Ackland fell silent for almost four decades. Then, as he struggled against leukemia in the 1980s, he rewrote the play. Produced by the Orange Tree Theatre in 1988, it was taken up by the National Theatre and filmed by the BBC in the 1990s (starring the incomparable Judi Dench).

Now it’s back again at the National Theatre, where its originally shocking seediness and cast of drunks, gays, lesbians, soldiers, queens and 24-hour party people gets the glossiest of make-overs. You know the kind of thing: masses of money thrown at the set, hugely expensive production values. Located in a Soho drinking club, La Vie en Rose, on the eve of the Labour landslide victory in the 1945 General Election, the play shows how some people hide from psychological reality and social change by various form of escapism, notably drink. Christine, the place’s proprietress, is a solitary 39-year-old whose frantic sociability stems from a chronic fear of being left alone. Her regular customers are a cross-section of bohemian arty types and layabouts.

These include Hugh Marriner, a once-famous writer now working for the Ministry of Information, who worries about his lover Nigel, a dress designer who sleeps with a female patron in order to finance his business, and also tries to butter up Maurice, a film director on the look out for scripts. Then there’s red-haired Elizabeth, who lives with Siegfried, an Austrian refugee and black market spiv. Others include Mrs Marriner, Hugh’s mother; Julia, an old lady suffering from dementia; the camp Lady Lettice (aka The Treacle Queen); the noisy failed artist Michael; the bible-bashing sectarian Madge and the streetwalking prostitute Fifi. Plus countless soldiers, and others. Yeah, the cast is gigantic.

In his revision of the original play, Ackland made the sexuality of his characters more explicit, and took his revenge on Hobson by creating the character of R B Monody, a pompous, grumpy lesbian critic who is subjected to a page-long vigorous tirade by Hugh. Most of the other characters, who were condemned as unpatriotic degenerates in the 1950s, now have more call on our sympathies. A straight GI, who thinks paying for sex is somehow an insult to his manhood, ignores the come-ons of a female prostitute and has fun with a man instead — sexual fluidity Soho style.

But, watching this three-hour version, you have plenty of time not only to admire Ackland’s cameos, but also to question whether this play really is a masterpiece. In the absence of anything that could be enjoyed as a plot, there is an accumulation of incidents that the generous will call Chekhovian, but the more disenchanted will admit are pretty pointless. There is a repetitiveness about the dialogues and the action that makes a point about the senselessness of drunken escapism, then makes the same point again. And again. And again. Likewise, the major climax about Ravensbrück concentration camp depends on an eye-wateringly unlikely coincidence, while the final collapse of the building’s ceiling is scarcely a subtle metaphor.

Still, for all its weaknesses as a drama, the play does provide a picture of postwar Britain that reeks of disenchantment and fumes with honest cynicism. Here is a society in which the bohemians, who are meant to be progressive, are actually pathetic day-dreamers unable to comprehend what happened in the Nazi concentration camps and are even unaware of the political changes occurring just across the road, where the Labour Party offices are (here given added contemporary relevance with a towering election poster that trumpets Labour’s plege to build new homes). This deliberately anti-heroic portrait of the state of the nation is a powerful antidote to the romantic wartime patriotism of the Blitz spirit. In Brexit Britain, it is a valuable reminder that truth is less glamorous, but more sane, than myth.

Director Joe Hill-Gibbins takes this over-rated play and injects it with well-paced energy and some well-organised visual effects, although his version is not immune from a certain messiness. But some scenes are confused, inaudible or hyper-active. The huge cast sings; the cast dances; distant rooms are glimpsed on Lizzie Clachan’s huge and elaborate set, which manages to dwarf the actual seedy club room at its centre. Fifi the prostitute walks up and down like a spectural sexual presence. As the play stumbles its increasingly squiffy way to its downbeat conclusion, the explosions of hectic activity, the stop-go dancing and the vivid light changes remind us that theatre today must be entertaining as well as emotionally engaging. And maybe that’s the problem here — the cast is overwhelmed by the production.

So Kate Fleetwood (to my mind too glamorous an actress to play this squalid character) as Christine struggles to connect us to her plight, although Charles Edwards is more successful in conveying the range of Hugh’s self-pitying emotions. Of the numerous cameos, my favourites are Danny Webb’s Siegfried, Lloyd Hutchinson’s Michael, Jonathan Slinger’s Maurice, Prasanna Puwanarajah’s Nigel and Eileen Walsh’s hilarious Madge. Their good work goes a long way to saving what is hyped as a classic, but is actually not such a very good play. Perhaps the 1950s’ critics were right after all. Absolute Hell is fun, but this time the show is better than the writing.